Bury my Heart about Native Americans 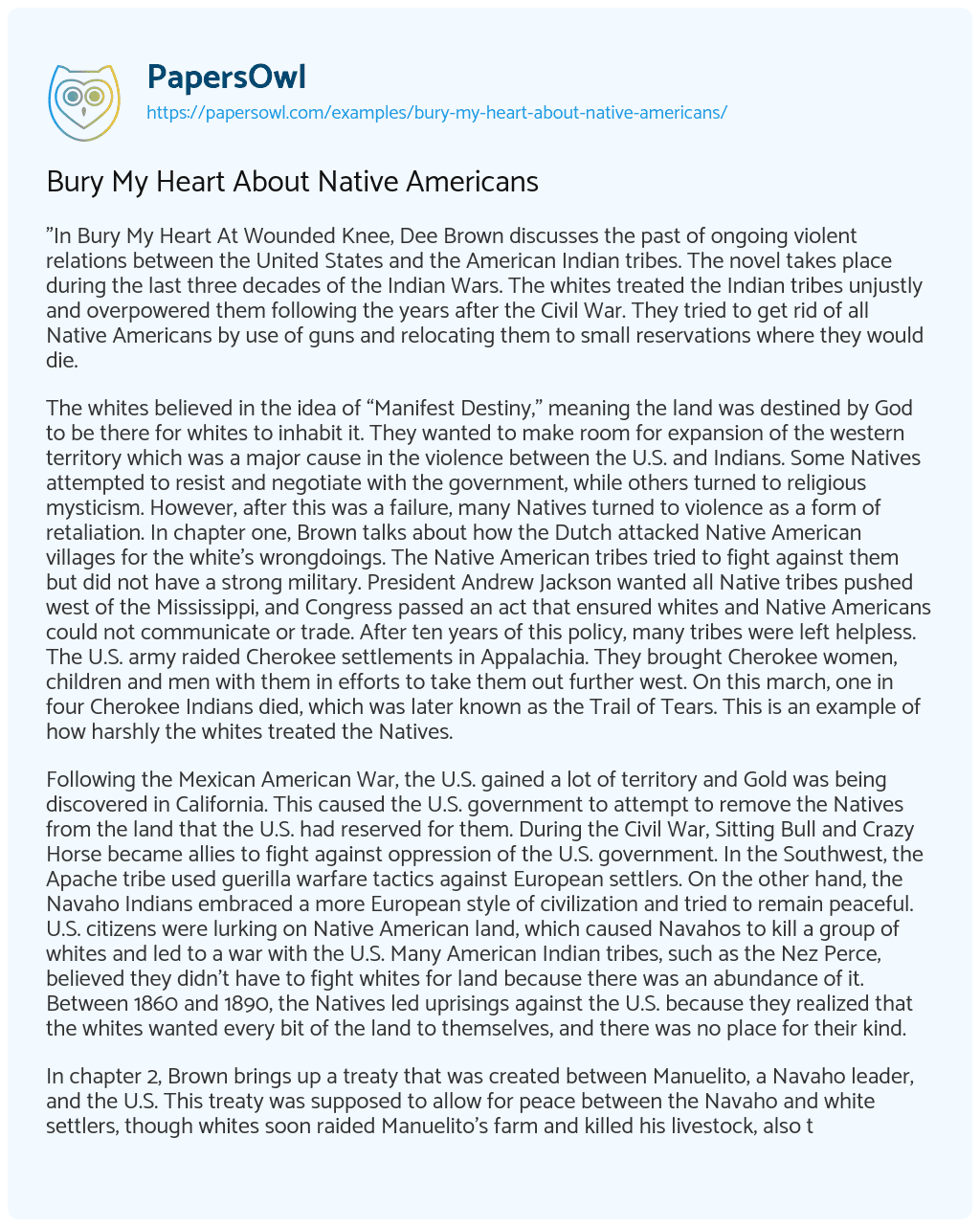 “In Bury My Heart At Wounded Knee, Dee Brown discusses the past of ongoing violent relations between the United States and the American Indian tribes. The novel takes place during the last three decades of the Indian Wars. The whites treated the Indian tribes unjustly and overpowered them following the years after the Civil War. They tried to get rid of all Native Americans by use of guns and relocating them to small reservations where they would die.

The whites believed in the idea of “Manifest Destiny,” meaning the land was destined by God to be there for whites to inhabit it. They wanted to make room for expansion of the western territory which was a major cause in the violence between the U.S. and Indians. Some Natives attempted to resist and negotiate with the government, while others turned to religious mysticism. However, after this was a failure, many Natives turned to violence as a form of retaliation. In chapter one, Brown talks about how the Dutch attacked Native American villages for the white’s wrongdoings. The Native American tribes tried to fight against them but did not have a strong military. President Andrew Jackson wanted all Native tribes pushed west of the Mississippi, and Congress passed an act that ensured whites and Native Americans could not communicate or trade. After ten years of this policy, many tribes were left helpless. The U.S. army raided Cherokee settlements in Appalachia. They brought Cherokee women, children and men with them in efforts to take them out further west. On this march, one in four Cherokee Indians died, which was later known as the Trail of Tears. This is an example of how harshly the whites treated the Natives.

Following the Mexican American War, the U.S. gained a lot of territory and Gold was being discovered in California. This caused the U.S. government to attempt to remove the Natives from the land that the U.S. had reserved for them. During the Civil War, Sitting Bull and Crazy Horse became allies to fight against oppression of the U.S. government. In the Southwest, the Apache tribe used guerilla warfare tactics against European settlers. On the other hand, the Navaho Indians embraced a more European style of civilization and tried to remain peaceful. U.S. citizens were lurking on Native American land, which caused Navahos to kill a group of whites and led to a war with the U.S. Many American Indian tribes, such as the Nez Perce, believed they didn’t have to fight whites for land because there was an abundance of it. Between 1860 and 1890, the Natives led uprisings against the U.S. because they realized that the whites wanted every bit of the land to themselves, and there was no place for their kind.

In chapter 2, Brown brings up a treaty that was created between Manuelito, a Navaho leader, and the U.S. This treaty was supposed to allow for peace between the Navaho and white settlers, though whites soon raided Manuelito’s farm and killed his livestock, also taking back slaves. Throughout the book, there is a pattern of treaties being created and then white settlers always seem to violate the treaties. This always ends in a conflict and creates violence. Congress didn’t make agreements official since the Natives did not have the power to question the treaties in a court of law. As tensions escalated, the Navahos set out to raid Mexican villages, as they did for centuries as a form of retaliation. As before, another treaty was signed between the Navahos and Canby, but the treaty only lasted a few months when Navahos and U.S. soldiers placed bets on horses, and it was later discovered that the U.S. cut the rein with a knife to make sure the Navahos lost.

General James Carleton heard of the discovery of Gold and wanted his soldiers to attack any Apaches found on the land and relocate them to a new reservation called Bosque Redondo. Kit Carson, who was married to a Native woman, was ordered to march through the territory to prepare for war with any Navahos who resisted the relocation. Carson and his soldiers burned Navaho fields, destroying livestock, and stole horses from Navahos in attempt to remove them from what the whites believed to be their land. Navahos threw stones at the whites, but many Navahos were killed due to starvation, and the rest surrendered to their new reservation. The Long Walk, organized by the U.S., consisted of thousands of men, women and children being forced to walk hundreds of miles to reach their new reservation. Manuelito believed they were being relocated to be killed so he led his people away from the U.S. army. Carleton explained that it was the Navaho’s destiny to leave their ancestral lands. Manuelito continued to refuse to surrender and Carleton ordered his troops to capture him and kill him. The military used his resistance as an excuse to murder other Navahos who were not on the reservation. Once again, a treaty was signed and disregarded.

Aside from these tribes, other tribes experienced this pattern of unfairness as well. The Sioux were losing their land in woodland areas. Little Crow witnessed starvation as a result of this treaty and tried to appeal to Thomas Galbraith whom showed no sense of care. Sioux tribesman killed four white men and Little Crow knew this meant the U.S. would use this an excuse to lead an attack on others. Little Crow decided it was time to go to war with the U.S., even though the chances of victory were unlikely. Again and again, Little Crow’s men failed to do any damage to the U.S., though it sent a threatening message to white settlers.

In chapter 4, Brown talks about the Sand Creek Massacre, where hundreds of American soldiers attacked Cheyenne tribes. Many children and woman were killed in this massacre, as well as scalped. A few survivors, including George Bent, got away. George returned with his brother and left the ranch for good. The U.S. army was out to get anyone who had been trying to seek peace with the U.S. The Cheyenne and Arapaho tribes decided their only option was to resort to violence. The Sand Creek Massacre left the Indian tribes in shock and also united the tribes in efforts to go against their enemy as a group. In this chapter, Brown focuses on how the U.S. government wanted to make room for railroads and settlements on the Cheyenne’s territory.

As time went on, violence was escalating and it became more apparent that the whites were trying to get rid of all Native Americans. Brown uses examples throughout the book, discussing different tribes and their encounter with the U.S. trying to remove them from the land, to show why the violence of Natives was understandable. The U.S. wanted to remove Natives from their land. The Indians tried to remain peaceful, though they were weakened by their lack of political representation and legal rights. They tried to use politics, law and religion to protect themselves from the U.S., though it always ended in failure. Violence was all they had left to turn to and in Bury My Heart At Wounded Knee, you can get a better understanding of how poorly whites treated Natives.”

Bury My Heart About Native Americans. (2021, Jun 05). Retrieved from https://papersowl.com/examples/bury-my-heart-about-native-americans/

Review on the Native Americans’ History

A Lifetime of Injustice for the Native Americans under American Colonization