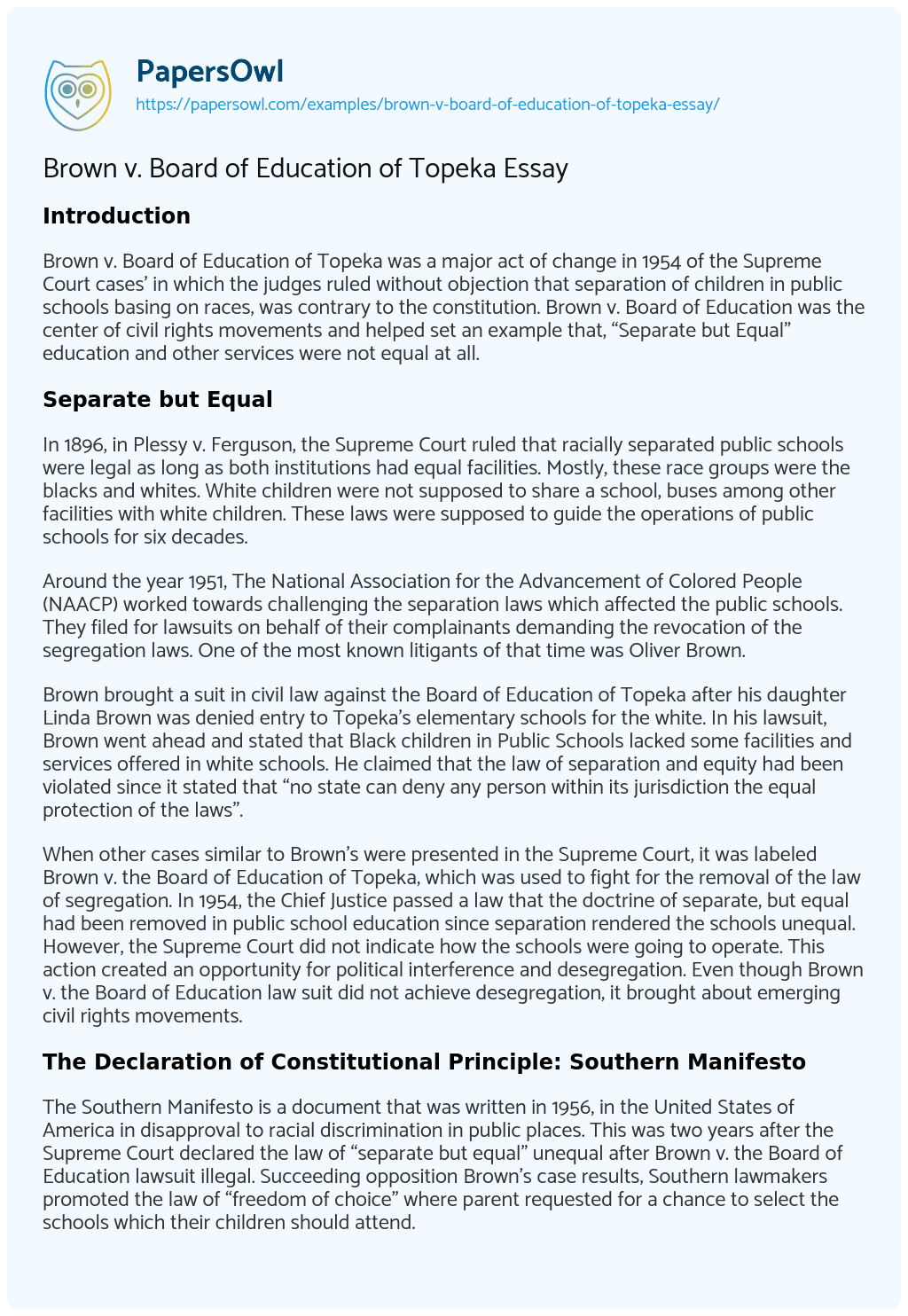 Brown v. Board of Education of Topeka was a major act of change in 1954 of the Supreme Court cases’ in which the judges ruled without objection that separation of children in public schools basing on races, was contrary to the constitution. Brown v. Board of Education was the center of civil rights movements and helped set an example that, “Separate but Equal” education and other services were not equal at all.

In 1896, in Plessy v. Ferguson, the Supreme Court ruled that racially separated public schools were legal as long as both institutions had equal facilities. Mostly, these race groups were the blacks and whites. White children were not supposed to share a school, buses among other facilities with white children. These laws were supposed to guide the operations of public schools for six decades.

Around the year 1951, The National Association for the Advancement of Colored People (NAACP) worked towards challenging the separation laws which affected the public schools. They filed for lawsuits on behalf of their complainants demanding the revocation of the segregation laws. One of the most known litigants of that time was Oliver Brown.

Brown brought a suit in civil law against the Board of Education of Topeka after his daughter Linda Brown was denied entry to Topeka’s elementary schools for the white. In his lawsuit, Brown went ahead and stated that Black children in Public Schools lacked some facilities and services offered in white schools. He claimed that the law of separation and equity had been violated since it stated that “no state can deny any person within its jurisdiction the equal protection of the laws”.

When other cases similar to Brown’s were presented in the Supreme Court, it was labeled Brown v. the Board of Education of Topeka, which was used to fight for the removal of the law of segregation. In 1954, the Chief Justice passed a law that the doctrine of separate, but equal had been removed in public school education since separation rendered the schools unequal. However, the Supreme Court did not indicate how the schools were going to operate. This action created an opportunity for political interference and desegregation. Even though Brown v. the Board of Education law suit did not achieve desegregation, it brought about emerging civil rights movements.

The Southern Manifesto is a document that was written in 1956, in the United States of America in disapproval to racial discrimination in public places. This was two years after the Supreme Court declared the law of “separate but equal” unequal after Brown v. the Board of Education lawsuit illegal. Succeeding opposition Brown’s case results, Southern lawmakers promoted the law of “freedom of choice” where parent requested for a chance to select the schools which their children should attend.

The Southern Manifesto strengthened state measures that increased choices for white children to attend separate private schools by providing tuition fee for them. The Southern Manifesto also wanted the schools’ board to allocate schools to students basing on their race. They also claimed that public schools that acknowledged black children should be deprived of state funds as a form of punishment.

The main aim of the Southern Manifesto was to make sure that Brown’s claims were denied at any cost. However, some of the Southern State Senators refused to sign the enactment of that bill stating it was wrong. Their lack of support caused a great deal of rivalry with their partners. The Southern Manifesto accused the Supreme Court of abuse of power when their grievances were dismissed. They swore to use all legal and lawful means to prevent the implementation of the Courts’ decision.

This was the last speech the president gave in public. This speech is best known for the message it had for Americans against the military-industrial complex that had developed after the Second World War. He began by preparing the citizens on the changing tactics of the American defense in preparation for war against Germany and Japan. He stated that the cold war intrigued these development to avoid surprise attacks from their rivals with the influence Military-Industrial complex.

The president asked the public to maintain peace in the military establishment. However, he encouraged them to keep their weapons and defense ready for any time aggressors may decide to attack their nation. The president believed that the growth in strength of America’s army was necessary to enable them to deal with the Soviet Union. President Eisenhower had led America through the Second World War and the cold war and granted them victory, but he also urged them that preparation for another war should always be intact. The speech went ahead and warned the citizens that they should avoid plan for and control their spending habits in preparation for the future. Though the speech lasted for only ten minutes, it had an intensified message for the Americans which he will always be remembered for. He ushered in a new and young government with a warning to guide them in the future.

Today, after more than sixty years, the Brown v. Board of Education is still going on where people are fighting for equal rights for the whites, the blacks and other races in the country’s schools. The Southern Manifesto also has its moments, but this time they have a genuine interest in the security and well-being of students going to school in poorly performing institutions in the country. It is important to note that those concerned with satisfying Brown’s aptitude understand that remodeling education entails a comprehensive approach.”

Brown v. Board of Education of Topeka Essay. (2021, May 22). Retrieved from https://papersowl.com/examples/brown-v-board-of-education-of-topeka-essay/

Brown Vs. Board of Education of Topeka

Brown V. Board of Education of Topeka