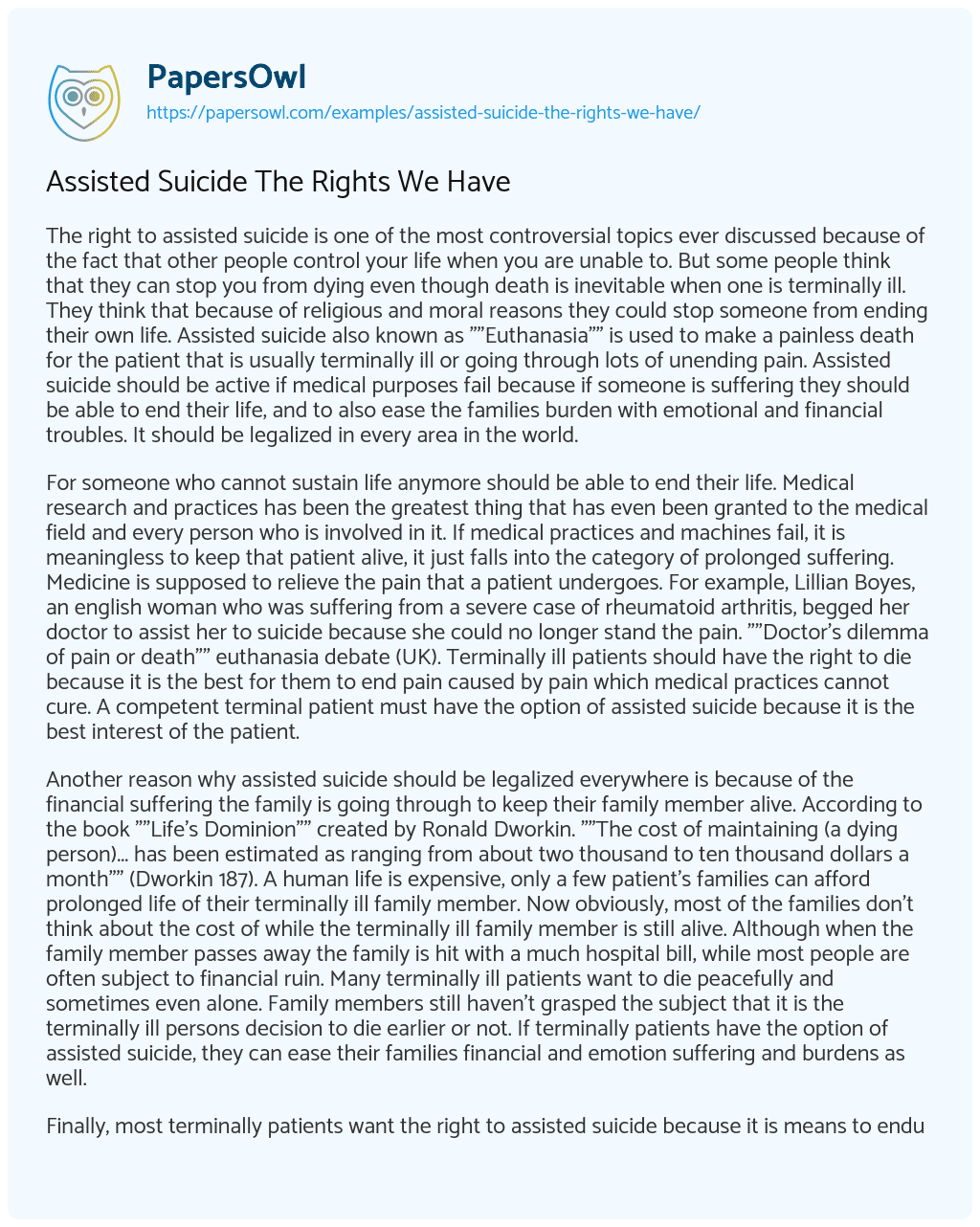 The right to assisted suicide is one of the most controversial topics ever discussed because of the fact that other people control your life when you are unable to. But some people think that they can stop you from dying even though death is inevitable when one is terminally ill. They think that because of religious and moral reasons they could stop someone from ending their own life. Assisted suicide also known as “”Euthanasia”” is used to make a painless death for the patient that is usually terminally ill or going through lots of unending pain. Assisted suicide should be active if medical purposes fail because if someone is suffering they should be able to end their life, and to also ease the families burden with emotional and financial troubles. It should be legalized in every area in the world.

For someone who cannot sustain life anymore should be able to end their life. Medical research and practices has been the greatest thing that has even been granted to the medical field and every person who is involved in it. If medical practices and machines fail, it is meaningless to keep that patient alive, it just falls into the category of prolonged suffering. Medicine is supposed to relieve the pain that a patient undergoes. For example, Lillian Boyes, an english woman who was suffering from a severe case of rheumatoid arthritis, begged her doctor to assist her to suicide because she could no longer stand the pain. “”Doctor’s dilemma of pain or death”” euthanasia debate (UK). Terminally ill patients should have the right to die because it is the best for them to end pain caused by pain which medical practices cannot cure. A competent terminal patient must have the option of assisted suicide because it is the best interest of the patient.

Another reason why assisted suicide should be legalized everywhere is because of the financial suffering the family is going through to keep their family member alive. According to the book “”Life’s Dominion”” created by Ronald Dworkin. “”The cost of maintaining (a dying person)… has been estimated as ranging from about two thousand to ten thousand dollars a month”” (Dworkin 187). A human life is expensive, only a few patient’s families can afford prolonged life of their terminally ill family member. Now obviously, most of the families don’t think about the cost of while the terminally ill family member is still alive. Although when the family member passes away the family is hit with a much hospital bill, while most people are often subject to financial ruin. Many terminally ill patients want to die peacefully and sometimes even alone. Family members still haven’t grasped the subject that it is the terminally ill persons decision to die earlier or not. If terminally patients have the option of assisted suicide, they can ease their families financial and emotion suffering and burdens as well.

On the other side of the issue, people who are against the issue of assisted suicide believe that a terminally ill person does NOT have the right to end their suffering. They go back to the claim that doctors are violating the Hippocratic Oath for the certain doctors who participate in assisted suicide. The Hippocratic Oath is the Oath that basically says that a Doctor should swear to only improve and heal a patient. Although people who make this claim do not know that, In Canada, “”only a few medical schools use the Hippocratic Oath”” because it is inconsistent with its stance of medicine. (Good Life/Good Death) by Christiaan, Barnard. A reason why this Oath is inconsistent is because of what chemotherapy does to cancer patients. Cancer patients that go through chemotherapy suffer from incredible pain, hair loss, vomiting, etc… In conclusion, Assisted suicide should be legal in every state because a terminally ill patient without the option of Euthanasia, is called elongated suffering. If medical practices and machines fail to heal a patient, then life for that terminally ill patient is pointless. It bring burden to the family emotionally and financially and people who are not the patient should not be able to decide the fate of the patient for their own interest.

I write this essay because I feel that if this issue has not been resolved in every state, people are completely ridiculous, clueless, and not empathetic at all. If a person wants to end their own life early because they know that they are going to die in a couple months and cannot leave a medical bed, WHILE still going through constant pain. Why should the law control the suffering of a person.

Assisted Suicide The Rights We Have. (2020, May 02). Retrieved from https://papersowl.com/examples/assisted-suicide-the-rights-we-have/

The Right to Assisted Suicide in United States

Assisted Suicide and the Hippocratic Oath