Assisted Suicide and the Hippocratic Oath 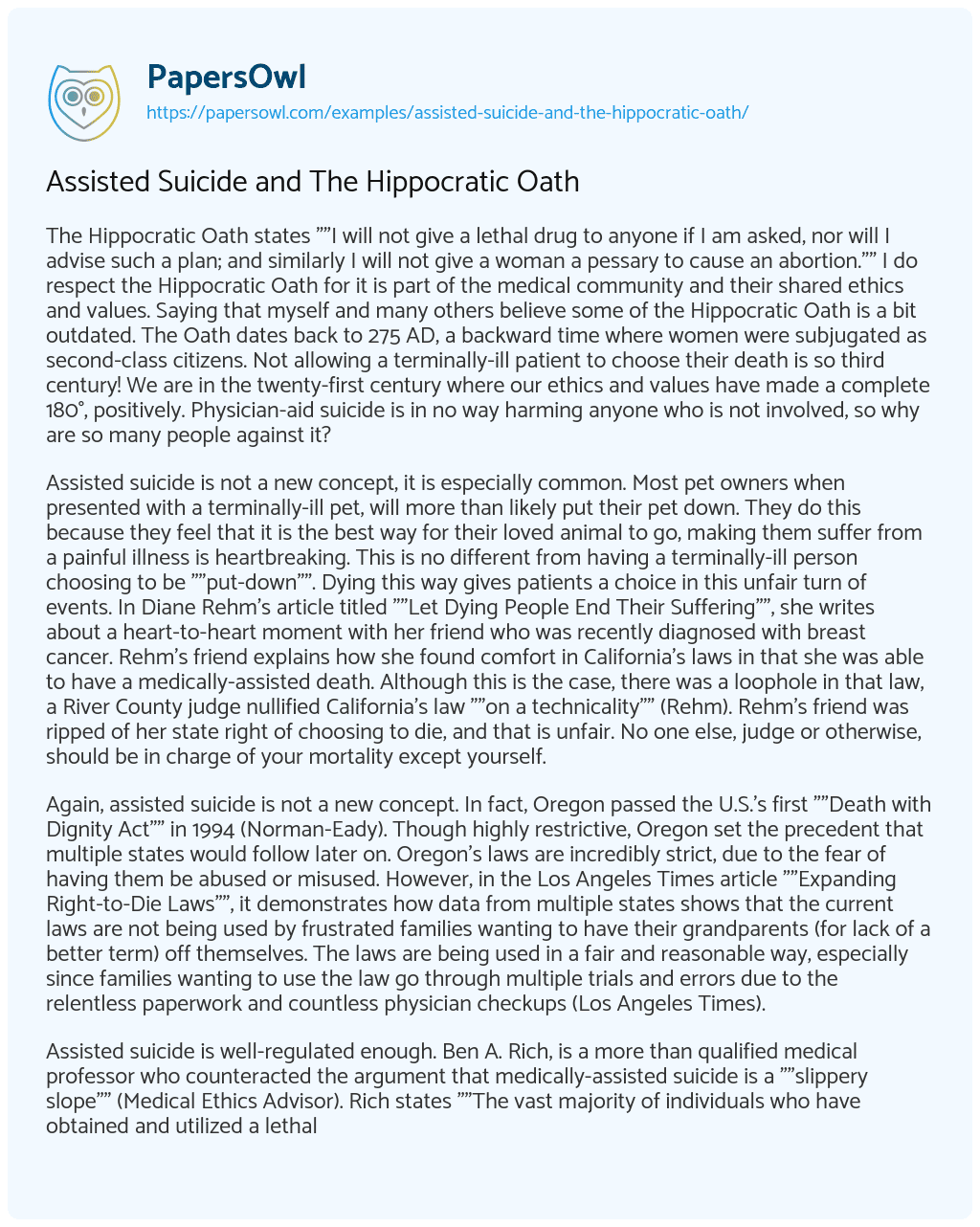 The Hippocratic Oath states “”I will not give a lethal drug to anyone if I am asked, nor will I advise such a plan; and similarly I will not give a woman a pessary to cause an abortion.”” I do respect the Hippocratic Oath for it is part of the medical community and their shared ethics and values. Saying that myself and many others believe some of the Hippocratic Oath is a bit outdated. The Oath dates back to 275 AD, a backward time where women were subjugated as second-class citizens. Not allowing a terminally-ill patient to choose their death is so third century! We are in the twenty-first century where our ethics and values have made a complete 180°, positively. Physician-aid suicide is in no way harming anyone who is not involved, so why are so many people against it?

Assisted suicide is not a new concept, it is especially common. Most pet owners when presented with a terminally-ill pet, will more than likely put their pet down. They do this because they feel that it is the best way for their loved animal to go, making them suffer from a painful illness is heartbreaking. This is no different from having a terminally-ill person choosing to be “”put-down””. Dying this way gives patients a choice in this unfair turn of events. In Diane Rehm’s article titled “”Let Dying People End Their Suffering””, she writes about a heart-to-heart moment with her friend who was recently diagnosed with breast cancer. Rehm’s friend explains how she found comfort in California’s laws in that she was able to have a medically-assisted death. Although this is the case, there was a loophole in that law, a River County judge nullified California’s law “”on a technicality”” (Rehm). Rehm’s friend was ripped of her state right of choosing to die, and that is unfair. No one else, judge or otherwise, should be in charge of your mortality except yourself.

Again, assisted suicide is not a new concept. In fact, Oregon passed the U.S.’s first “”Death with Dignity Act”” in 1994 (Norman-Eady). Though highly restrictive, Oregon set the precedent that multiple states would follow later on. Oregon’s laws are incredibly strict, due to the fear of having them be abused or misused. However, in the Los Angeles Times article “”Expanding Right-to-Die Laws””, it demonstrates how data from multiple states shows that the current laws are not being used by frustrated families wanting to have their grandparents (for lack of a better term) off themselves. The laws are being used in a fair and reasonable way, especially since families wanting to use the law go through multiple trials and errors due to the relentless paperwork and countless physician checkups (Los Angeles Times).

Assisted suicide is well-regulated enough. Ben A. Rich, is a more than qualified medical professor who counteracted the argument that medically-assisted suicide is a “”slippery slope”” (Medical Ethics Advisor). Rich states “”The vast majority of individuals who have obtained and utilized a lethal prescription are well-educated, adequately insured, enrolled in hospice, and have been deemed by two physicians to have decisional capacity uncompromised by depression or the undue influence of another person,”” (Medical Ethics Advisor). With this in mind, expanding the current assisted suicide laws could be in the near future. According to the Los Angeles Times, there is currently a discussion about expanding the right-to-die laws. This expansion would provide access of the law to people who don’t have a six-month deadline, such as ALS and Alzheimer patients, who are continuously ignored by the current laws in place (Los Angeles Times).

In actuality, there is not a lot of opposition to medically administered death. Paula Span’s article, “”Physician Aid in Dying Gains Acceptance in the U.S.”” brings back a considerably old survey done on a recent topic, “”Polltakers for the General Social Survey, done by NORC at the University of Chicago, have asked a representative national sample this question since 1977: ‘When a person has a disease that cannot be cured, do you think doctors should be allowed by law to end the patient’s life by some painless means if the patient and his family request it?”” (Span). 66-69% of Americans said yes. But why is there such a stigma around assisted death? Well, this stigma is due to negative propaganda. It is pretty obvious that the Catholic Church would be against suicide because they believe that humans are not to consider their own mortality, only God can. That is okay to feel that way, but your views should not dictate other people’s lives. Giving someone a choice to die does not affect anyone else but themselves, but taking that choice away affects everyone.

I do take into consideration the opposing side, and I completely understand the people who are against assisted suicide. It can be difficult to go against moral and /or religious beliefs. However, most of those oppositions have little to no real tangible evidence. For example, Daniel Payne’s article titled “”We Shouldn’t Allow Tragic Suicide”” goes on to talk about how in places where medically-assisted suicide is legal, the general suicide rates rise (Payne). Payne’s evidence, however, is pulled from the Netherlands, where suicide and euthanasia are legal and accessible, no matter the reason behind your suicide. Our laws are not based on the laws of the Netherlands, the U.S. would never enact such lax laws, especially considering how restricted and limited the current assisted-suicide laws are now in the United States.

To conclude, those for assisted suicide are not for suicide, in general terms, by any means. We believe that there should be a choice. The terminally ill should not have to suffer in pain and torture themselves due to other people choosing their fate. Your life should be determined by you. Your life is in your hands.

Assisted Suicide and The Hippocratic Oath. (2019, Apr 22). Retrieved from https://papersowl.com/examples/assisted-suicide-and-the-hippocratic-oath/

The Right to Assisted Suicide in United States