Analysis of Letter from Birmingham 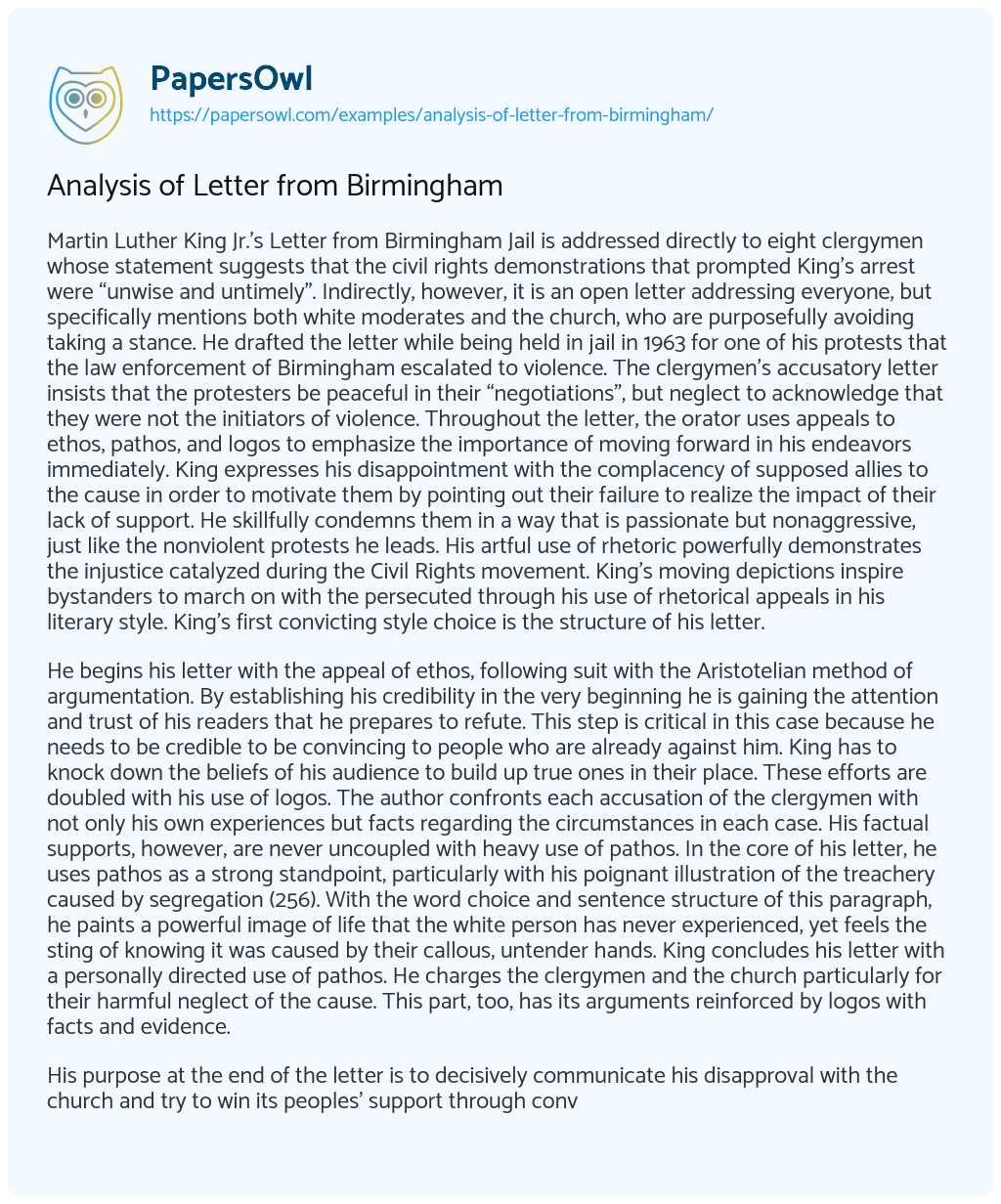 Martin Luther King Jr.’s Letter from Birmingham Jail is addressed directly to eight clergymen whose statement suggests that the civil rights demonstrations that prompted King’s arrest were “unwise and untimely”. Indirectly, however, it is an open letter addressing everyone, but specifically mentions both white moderates and the church, who are purposefully avoiding taking a stance. He drafted the letter while being held in jail in 1963 for one of his protests that the law enforcement of Birmingham escalated to violence. The clergymen’s accusatory letter insists that the protesters be peaceful in their “negotiations”, but neglect to acknowledge that they were not the initiators of violence. Throughout the letter, the orator uses appeals to ethos, pathos, and logos to emphasize the importance of moving forward in his endeavors immediately. King expresses his disappointment with the complacency of supposed allies to the cause in order to motivate them by pointing out their failure to realize the impact of their lack of support. He skillfully condemns them in a way that is passionate but non­aggressive, just like the non­violent protests he leads. His artful use of rhetoric powerfully demonstrates the injustice catalyzed during the Civil Rights movement. King’s moving depictions inspire bystanders to march on with the persecuted through his use of rhetorical appeals in his literary style. King’s first convicting style choice is the structure of his letter.

He begins his letter with the appeal of ethos, following suit with the Aristotelian method of argumentation. By establishing his credibility in the very beginning he is gaining the attention and trust of his readers that he prepares to refute. This step is critical in this case because he needs to be credible to be convincing to people who are already against him. King has to knock down the beliefs of his audience to build up true ones in their place. These efforts are doubled with his use of logos. The author confronts each accusation of the clergymen with not only his own experiences but facts regarding the circumstances in each case. His factual supports, however, are never uncoupled with heavy use of pathos. In the core of his letter, he uses pathos as a strong standpoint, particularly with his poignant illustration of the treachery caused by segregation (256). With the word choice and sentence structure of this paragraph, he paints a powerful image of life that the white person has never experienced, yet feels the sting of knowing it was caused by their callous, untender hands. King concludes his letter with a personally directed use of pathos. He charges the clergymen and the church particularly for their harmful neglect of the cause. This part, too, has its arguments reinforced by logos with facts and evidence.

His purpose at the end of the letter is to decisively communicate his disapproval with the church and try to win its peoples’ support through convincing them of his connection to the faith and the immorality of their stance. The structure with which Martin Luther King Jr. chooses to compose his reply is motivated through subtly gaining the reader’s’ trust, making them feel empathetic to the cause, and further convincing them through a personal standpoint. These things combined create a powerful work that, if it fails to make one pick up a sign and march, at least reveals the fault of their omission. Further, King uses his comparisons to historical figures to inspire his audience. The influence of these comparisons stems from all three of the rhetorical appeals. Some may be convicted through knowing the facts about a figure and his mention of them confirming their truth. Others may find that they are connected to these figures through faith, as well, as he uses Jesus (262) and St. Paul (253). And even further he may be confirming his own credibility through his juxtaposition of himself and the character. An effective example of this is his rebuttal to being called an extremist(262).He lists several figures (and a relevant quote) that all appeal to either one’s sense of faith or their nationalism.

This is made more convincing through the use of pathos, ethos, and logos in one. He begins the paragraph with, “But though I was initially disappointed at being categorized as an extremist, as I continue to think about the matter I gradually gained a measure of satisfaction from the label.” King uses this introduction as an appeal to ethos, showing that he’s the type of person who can turn a negative into a positive. The repetition later in the paragraph also serves as a rhetorical device, putting an emphasis on the power of extremism and just how many influential figures have shown it. His writing style reveals his accusers’ fault through a simple series of comparisons more effectively because of his use of rhetorical appeals. Another way King motivates so well is through his word choice. In the particular passage on page 256, King writes about the viciousness of segregation that he and his brothers and sisters have experienced, using pathos. The way he places his words syntactically shows how influential rhetoric can be in writing. When he writes in the beginning, “Perhaps it is easy for those who have never felt the stinging dart of segregation to say, ‘Wait.’” (256), his pointed criticism is apparent; King wants to demonstrate how far the balance of oppression tips over, and weigh it upon his oppressors’ minds.

He says it almost passive ­aggressively as he then lists, line upon line, things that the white man will never experience and never understand, and finishes the sentence with, “then you will understand why we find it difficult to wait” (257). One of these lines that is especially tormenting says, “…when you suddenly find yourself tongue ­twisted and your speech stammering as you seek to explain to your six­ year old daughter why she can’t go to the public amusement park that has just been advertised on television and see tears welling up in her eyes when she is told that Funtown is closed to colored children.” His description of this scene produces such a clear mental image that it is deeply relatable for readers and in turn a strong use of pathos. This technique is employed in other parts of the paragraph as well. King’s tactics of motivating are clearly used in this example. Throughout his letter, King employs a strong sense of diction and literary style in order to motivate his audience who is refusing to take a stance on his cause. The people he is particularly addressing are supposedly sympathetic to his cause, but unwilling to voice their support. King recognizes their unwillingness and condemns them for that, effectively pulling their flaws to the forefront, if it doesn’t completely move them to action. Martin Luther King Jr.’s painting of his struggle forces his unemotional audience to self­ reflect on their unloving position in the movement.

Analysis of Letter from Birmingham. (2021, Jul 01). Retrieved from https://papersowl.com/examples/analysis-of-letter-from-birmingham/

Analysis of Letter from Birmingham Jail

Rhetorical Analysis of “The Letter of Birmingham Jail”