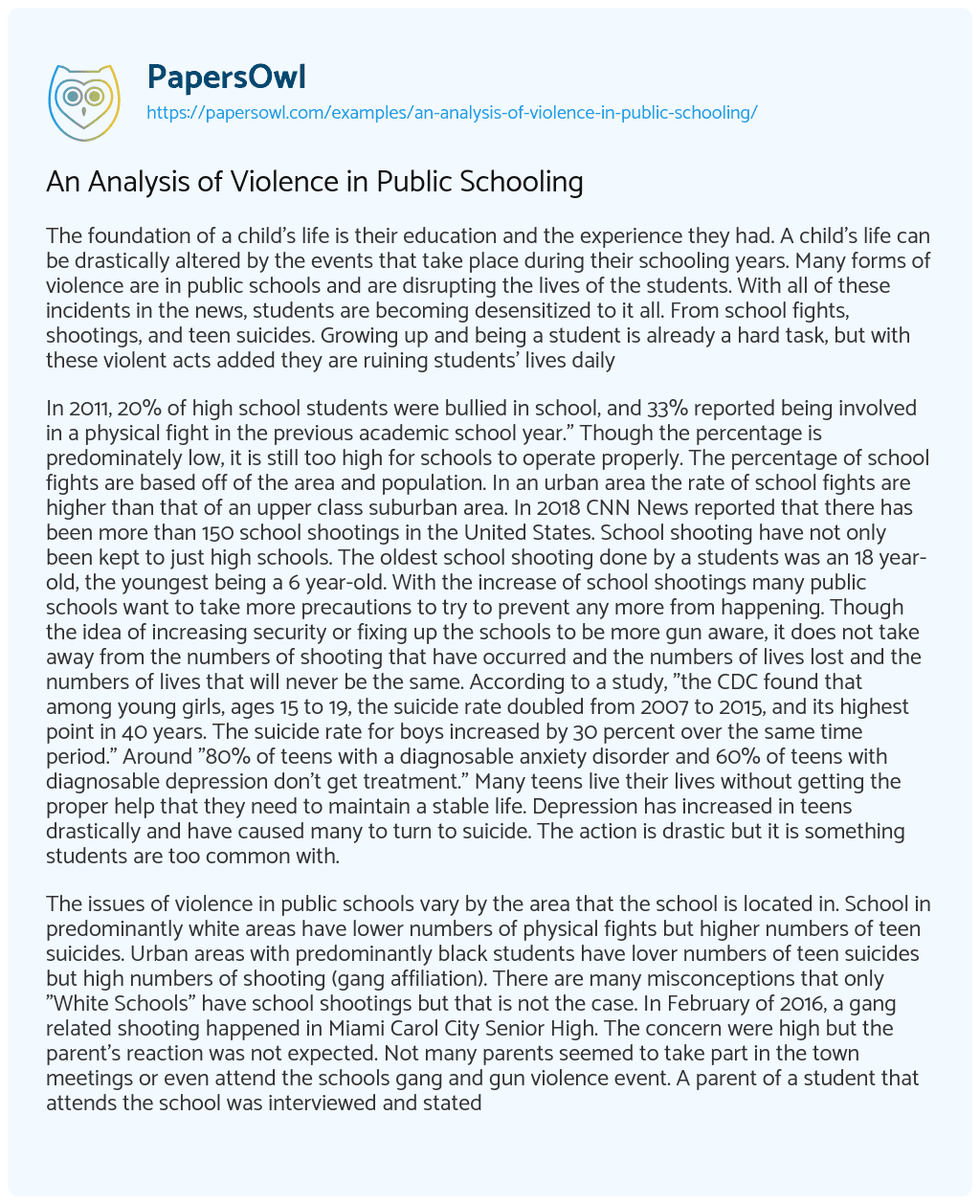 The foundation of a child’s life is their education and the experience they had. A child’s life can be drastically altered by the events that take place during their schooling years. Many forms of violence are in public schools and are disrupting the lives of the students. With all of these incidents in the news, students are becoming desensitized to it all. From school fights, shootings, and teen suicides. Growing up and being a student is already a hard task, but with these violent acts added they are ruining students’ lives daily

In 2011, 20% of high school students were bullied in school, and 33% reported being involved in a physical fight in the previous academic school year.” Though the percentage is predominately low, it is still too high for schools to operate properly. The percentage of school fights are based off of the area and population. In an urban area the rate of school fights are higher than that of an upper class suburban area. In 2018 CNN News reported that there has been more than 150 school shootings in the United States. School shooting have not only been kept to just high schools. The oldest school shooting done by a students was an 18 year-old, the youngest being a 6 year-old. With the increase of school shootings many public schools want to take more precautions to try to prevent any more from happening. Though the idea of increasing security or fixing up the schools to be more gun aware, it does not take away from the numbers of shooting that have occurred and the numbers of lives lost and the numbers of lives that will never be the same. According to a study, “the CDC found that among young girls, ages 15 to 19, the suicide rate doubled from 2007 to 2015, and its highest point in 40 years. The suicide rate for boys increased by 30 percent over the same time period.” Around “80% of teens with a diagnosable anxiety disorder and 60% of teens with diagnosable depression don’t get treatment.” Many teens live their lives without getting the proper help that they need to maintain a stable life. Depression has increased in teens drastically and have caused many to turn to suicide. The action is drastic but it is something students are too common with.

The issues of violence in public schools vary by the area that the school is located in. School in predominantly white areas have lower numbers of physical fights but higher numbers of teen suicides. Urban areas with predominantly black students have lover numbers of teen suicides but high numbers of shooting (gang affiliation). There are many misconceptions that only “White Schools” have school shootings but that is not the case. In February of 2016, a gang related shooting happened in Miami Carol City Senior High. The concern were high but the parent’s reaction was not expected. Not many parents seemed to take part in the town meetings or even attend the schools gang and gun violence event. A parent of a student that attends the school was interviewed and stated that this “sort of thing happens when you live in an area like this…” Many parents want better life styles and educations for their kids but cannot afford to move out of the run down, gang filled areas, which causes many parents to be extremely strict on their kids. Not allowing them to be out past a certain time, or not letting them hang out at certain neighborhood hangout with certain people. For many parents the only “safe” places for their kids are home and school, but now many parents cannot even be sure that their kids is safe at school.

The rise in public school violence has many parents considering enrolling their children into private schooling to protect their kids from the dangers that have been occurring in the recent years. Public school systems want to take major precautions, such as Metal Detectors, Arming the teachers, and even hiring former police as teachers. Parents are taking matters into their own hands, doing research on the schools in their community and seeing if the rate of violence in the school is good enough for their child to attend. Parents look at the safety of the community, what is around the school, the gun laws in their state, the amount of bullying cases at that school. Certain areas have certain types of schools. In a upper class suburban area you will find high schools with big campuses, almost the size of a small university or community college. The schools offer different programs and academies, such as “International Baccalaureate Diploma Programme’s” and science tech and engineering academies. They have swimming pools and a selection of clubs that any student can join, while also catering to the mental needs of their students with a counseling wing that does more than just make sure you are taking the class that the county says you need. The area you live in place a big part in the type of education you get and the levels of violence your school with enclose. In public middles schools, bullying is not addressed as well as it should be.

Many middle school students, especially boys, participate in games such as “joaning” or “ragging”. This is when you tell jokes about or make fun of someone and see how many laugh you can receive. This is not how bullying is portrayed in the media so many students overlook it as such. Even though it is over looked it is still very hurtful to some, but because of the stigma it carries, many students don’t say how they honestly feel about the game. If one was to “get in their feelings” or get upset by something that was said about them then their peers would think they are “soft” and could not handle their forms of fun. These can all lead to mental instability and then depression. Students use extracurricular activities to get away from the bullying but some only have that follow them there. Social Media plays a big part in everything! And the problems that it is causing is only getting worst each year. Some students must deal with the everyday violence at school but then face it all again at their fingertips when they get home. If a student gets into a fight, within the next few hours you can find footage on a social media site, posted by one of the peers. How does violence in public schooling affect the types of social media available to children and usage of social media?

With all these issues there are also solutions that can put a positive effect on these student lives. Schools can offer after school programs that help the students deal with their issues. Support groups for students who have dealt with violent acts can be an effective and free solotion for students in public schools. Also, positive forms of recreation such as sports, clubs, and music based activities can give students a way to stay out of violence and trouble. With these forms of activities they can set rules and regulations for the students, such as, staying out of trouble, keeping their grades up, and not being caught up in violence. Violence in public school is an issue that is affecting our students drastically. Though the number are dropping, School fights, shootings, and suicides are still too high. The number of events are creating a unstable generation, while also making them strong. The Violence in public schooling is out of control and if left unhandled then it will become more out of control than it already is.

An Analysis of Violence in Public Schooling. (2019, Jun 16). Retrieved from https://papersowl.com/examples/an-analysis-of-violence-in-public-schooling/

Does Multi Media have an Impact on Violence in Schools