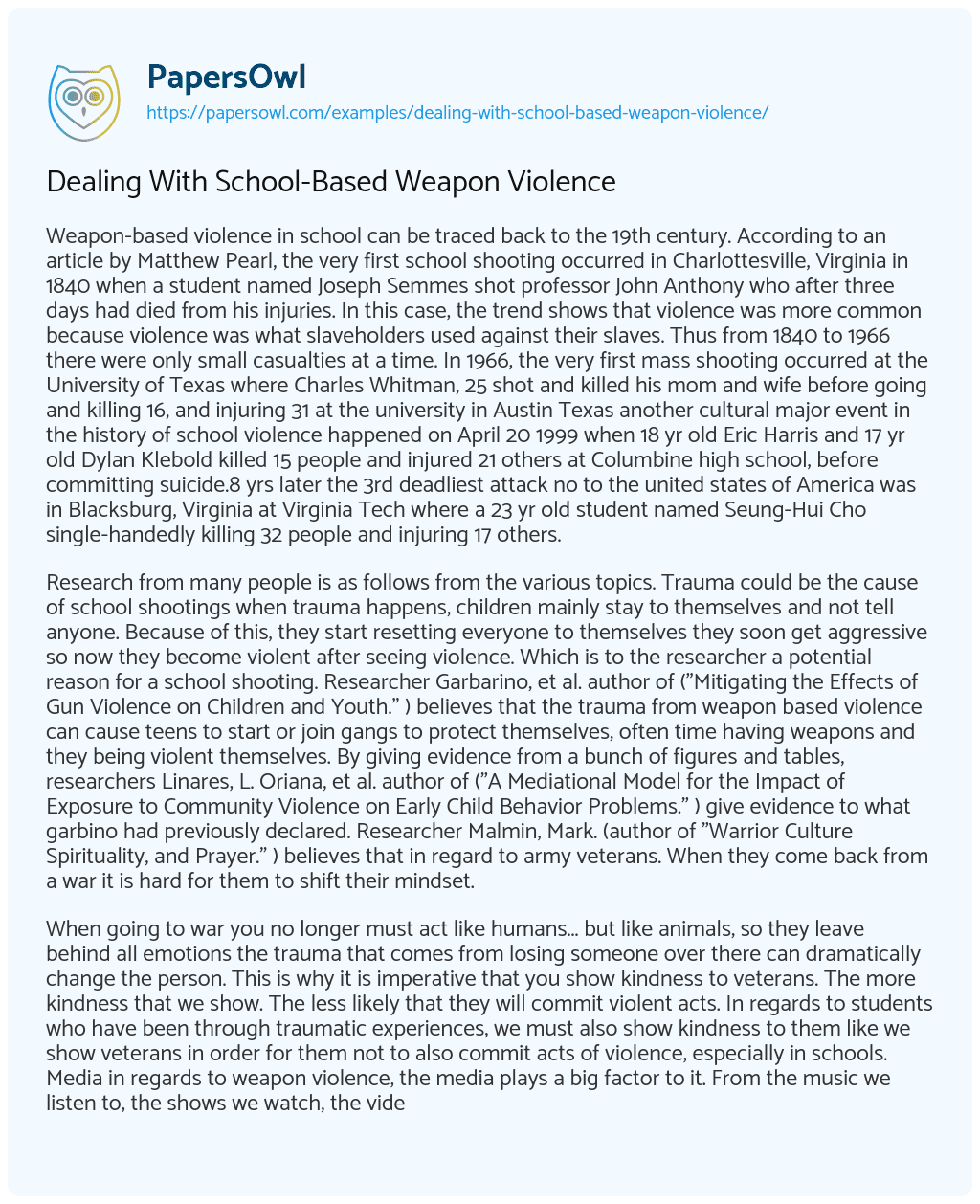 Weapon-based violence in school can be traced back to the 19th century. According to an article by Matthew Pearl, the very first school shooting occurred in Charlottesville, Virginia in 1840 when a student named Joseph Semmes shot professor John Anthony who after three days had died from his injuries. In this case, the trend shows that violence was more common because violence was what slaveholders used against their slaves. Thus from 1840 to 1966 there were only small casualties at a time. In 1966, the very first mass shooting occurred at the University of Texas where Charles Whitman, 25 shot and killed his mom and wife before going and killing 16, and injuring 31 at the university in Austin Texas another cultural major event in the history of school violence happened on April 20 1999 when 18 yr old Eric Harris and 17 yr old Dylan Klebold killed 15 people and injured 21 others at Columbine high school, before committing suicide.8 yrs later the 3rd deadliest attack no to the united states of America was in Blacksburg, Virginia at Virginia Tech where a 23 yr old student named Seung-Hui Cho single-handedly killing 32 people and injuring 17 others.

Research from many people is as follows from the various topics. Trauma could be the cause of school shootings when trauma happens, children mainly stay to themselves and not tell anyone. Because of this, they start resetting everyone to themselves they soon get aggressive so now they become violent after seeing violence. Which is to the researcher a potential reason for a school shooting. Researcher Garbarino, et al. author of (“Mitigating the Effects of Gun Violence on Children and Youth.” ) believes that the trauma from weapon based violence can cause teens to start or join gangs to protect themselves, often time having weapons and they being violent themselves. By giving evidence from a bunch of figures and tables, researchers Linares, L. Oriana, et al. author of (“A Mediational Model for the Impact of Exposure to Community Violence on Early Child Behavior Problems.” ) give evidence to what garbino had previously declared. Researcher Malmin, Mark. (author of “Warrior Culture Spirituality, and Prayer.” ) believes that in regard to army veterans. When they come back from a war it is hard for them to shift their mindset.

When going to war you no longer must act like humans… but like animals, so they leave behind all emotions the trauma that comes from losing someone over there can dramatically change the person. This is why it is imperative that you show kindness to veterans. The more kindness that we show. The less likely that they will commit violent acts. In regards to students who have been through traumatic experiences, we must also show kindness to them like we show veterans in order for them not to also commit acts of violence, especially in schools. Media in regards to weapon violence, the media plays a big factor to it. From the music we listen to, the shows we watch, the video games that we play. to even what we see in everyday life, we are surrounded by violence so much to the point that it changes our nature so that we ourselves become violent.

Researchers Lawrence, Regina G., and Thomas A. Birkland, (authors of “Guns, Hollywood, and School Safety: Defining the School-Shooting Problem Across Public Arenas*.”.) Judges not only the media but Congress. He also defines the problems with how the media and Congress deals with this. Instead of the media owning that they are partly to blame for the increased weapon violence in schools they look to put the blame on others. Congress needs to keep going through steps in order to secure that everyone is able to succeed in school. An example to media influencing children to do violent acts comes from Garbarino, James, et al. (author of “Mitigating the Effects of Gun Violence on Children and Youth.” ) (specifically from the article of the page from the paragraph of parental responses to gun violence are especially important because of the way that parents cope with traumatic events largely determines their children’s response) who in the case of 14 year old Kentucky Heath high school shooter Michael Carneal who shot 8 students and killed 3 of them that were praying.

He had opened fire on them. The media blamed it on the actions of the school and parents. James garbino had thought that in conclusion, the media has to stop being around weapons, stop showing bad behavior. The parents have to watch their kids and don’t show weapons/ keep it anywhere that can be in reach to the children. In order for that to happen fully The study further notes that not just the family and the environment but it is also up to to the school that needs to go take action steps to get to try to prevent the weapon violence in schools. Access to guns from the parents and loved one’s own reckless/ careless behaviors to getting it from gang members, or friends who got it themselves. It is very easy for kids to be of possession of a gun without even having to buy that sign in the first place. Which is crucial as to why we need to find ways in order to stop the causes of increased weapon violence on students in schools. I believe however that in order to find ways to stop/ put an end to the causes ( solutions to the problems) we must find the 1 simple cause of it ( the cause that further branches out to other aspects. ) There was a time when the schools themselves were very religious, like nuns and stuff. During that time Those schools were even doing better than some public and private schools.

And kept kids out of trouble, by fearing the students. The thought of someone being able to see your mistakes and the thought of when you die the bad things you had done will weigh heavily to the naughty side meaning you will be going to hell were the main factors of that. Alas, religious schools seemed unconstitutional because of the different religions that were there in America and they didn’t want to single out religions saying that Christianity was the only right religion. After scrapping those schools a good time pass since 1962 and then there was a lot of school shootings and bombings People believe that the most important cause is of lack of prayer causing increased weapon violence Is there a specific correlation between a lack of prayer and increased weapon violence in school? More does the causes of all other reasons to school weapon violence stem from a lack of religion in schools? This research question fills a research gap because of the fact that, previously published literary articles, never actually talked about a lack of prayer and increased weapon violence in schools as a correlation.

They thought of other things that caused increased school violence, such as the media, parents, and trauma.in addition, the available research does not consider a clear way to stop increased weapon violence in schools, except making the media, parents, and schools figure a way… Due to the lack of not having a way to end school weapon violence/ also not a clear reason for school shootings my research will try to fill the gap. The research is possible because I am able to interview/ survey 200 people about what the thing that is the 1 true cause of school/ weapon violence. I can then survey the group on what they think is a clear way to end school violence. A lack of faith? What do I believe… I agree with the satire article from the atheist pig. I believe that it is a ridiculous claim to believe that it is the 1 true cause. Hemant Mehta in response to the atheist pig also agrees to the satire believing that “If that was the real reason for the cause of school shootings than what’s the cause of church shootings and bombings, a lack of faith?”