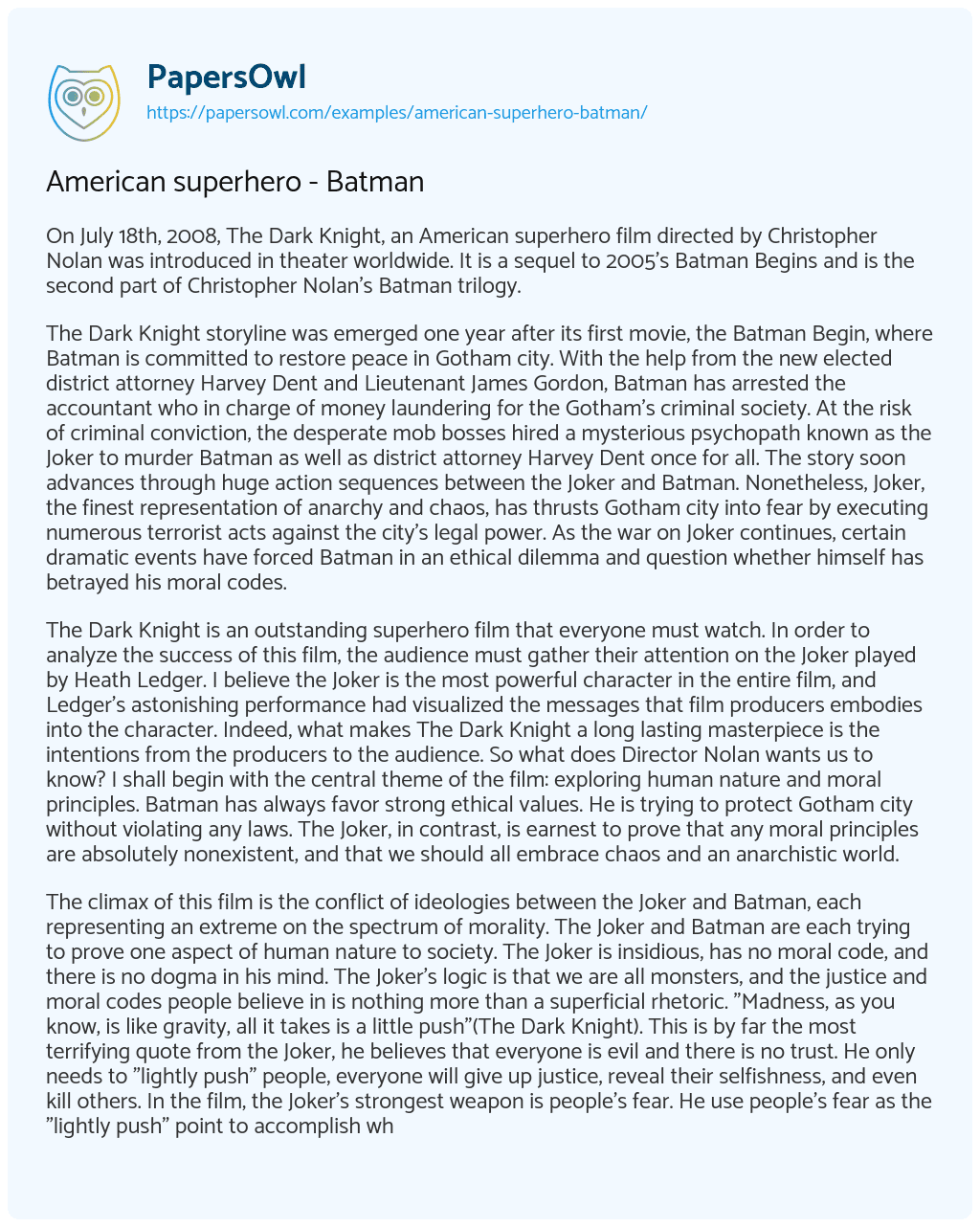 On July 18th, 2008, The Dark Knight, an American superhero film directed by Christopher Nolan was introduced in theater worldwide. It is a sequel to 2005’s Batman Begins and is the second part of Christopher Nolan’s Batman trilogy.

The Dark Knight storyline was emerged one year after its first movie, the Batman Begin, where Batman is committed to restore peace in Gotham city. With the help from the new elected district attorney Harvey Dent and Lieutenant James Gordon, Batman has arrested the accountant who in charge of money laundering for the Gotham’s criminal society. At the risk of criminal conviction, the desperate mob bosses hired a mysterious psychopath known as the Joker to murder Batman as well as district attorney Harvey Dent once for all. The story soon advances through huge action sequences between the Joker and Batman. Nonetheless, Joker, the finest representation of anarchy and chaos, has thrusts Gotham city into fear by executing numerous terrorist acts against the city’s legal power. As the war on Joker continues, certain dramatic events have forced Batman in an ethical dilemma and question whether himself has betrayed his moral codes.

The Dark Knight is an outstanding superhero film that everyone must watch. In order to analyze the success of this film, the audience must gather their attention on the Joker played by Heath Ledger. I believe the Joker is the most powerful character in the entire film, and Ledger’s astonishing performance had visualized the messages that film producers embodies into the character. Indeed, what makes The Dark Knight a long lasting masterpiece is the intentions from the producers to the audience. So what does Director Nolan wants us to know? I shall begin with the central theme of the film: exploring human nature and moral principles. Batman has always favor strong ethical values. He is trying to protect Gotham city without violating any laws. The Joker, in contrast, is earnest to prove that any moral principles are absolutely nonexistent, and that we should all embrace chaos and an anarchistic world.

The climax of this film is the conflict of ideologies between the Joker and Batman, each representing an extreme on the spectrum of morality. The Joker and Batman are each trying to prove one aspect of human nature to society. The Joker is insidious, has no moral code, and there is no dogma in his mind. The Joker’s logic is that we are all monsters, and the justice and moral codes people believe in is nothing more than a superficial rhetoric. “Madness, as you know, is like gravity, all it takes is a little push”(The Dark Knight). This is by far the most terrifying quote from the Joker, he believes that everyone is evil and there is no trust. He only needs to “lightly push” people, everyone will give up justice, reveal their selfishness, and even kill others. In the film, the Joker’s strongest weapon is people’s fear. He use people’s fear as the “lightly push” point to accomplish what he wants. He believes that everyone loves themselves and their loved ones. As long as you threaten their lives, everyone will become morally corrupt. The film shows his logic from the beginning. He lured several gangsters wearing clown masks to rob a bank and told them to kill each others so whoever alive at the end will get more money. As a result, those gangsters turn to slaughtered each other during the robbery. Those who were hesitant were immediately killed by their accomplices, and the Joker himself was the most decisive in the process, so he was the only one to survive. Everything the Joker does in the film has only one purpose: taunt Batman into killing him. Because of this, Batman will become just like him. If the Joker can prove that Batman, the most morally upright person is a murderer, then everybody can be one. The Joker wants to prove a point to everyone that people are indeed corrupted and chaotic. That is why the Joker is willing to sacrifice himself to verify his macabre logic. This is evident by the Joker telling Batman to kill him when he is at the edge of falling from a building(The Dark Knight). The Joker is a psychopath.

On the other side, Batman never kills. Batman needs to convince himself and every Gotham citizens that it is not just laws that keep us from insanity, but moral conduct that guide us not to kill. We might be all monsters deep inside our minds, but as long as we choose to have human decency, we will not suffer from chaos. In a sense, the Joker is not the real supervillain, but Batman’s internal struggle of whether or not to kill the Joker is. The struggle of Batman and the Joker is the struggle of each of us in our lives. This is the reason why The Dark Knight is a must watch film, it has some sort of philosophical meaning and not just a regular action movie. At the end, Batman wins because he has not killed the Joker.

Should Batman Kill the Joker?

Why Batman is the Best Superhero?

Batman is a Fictional Superhero