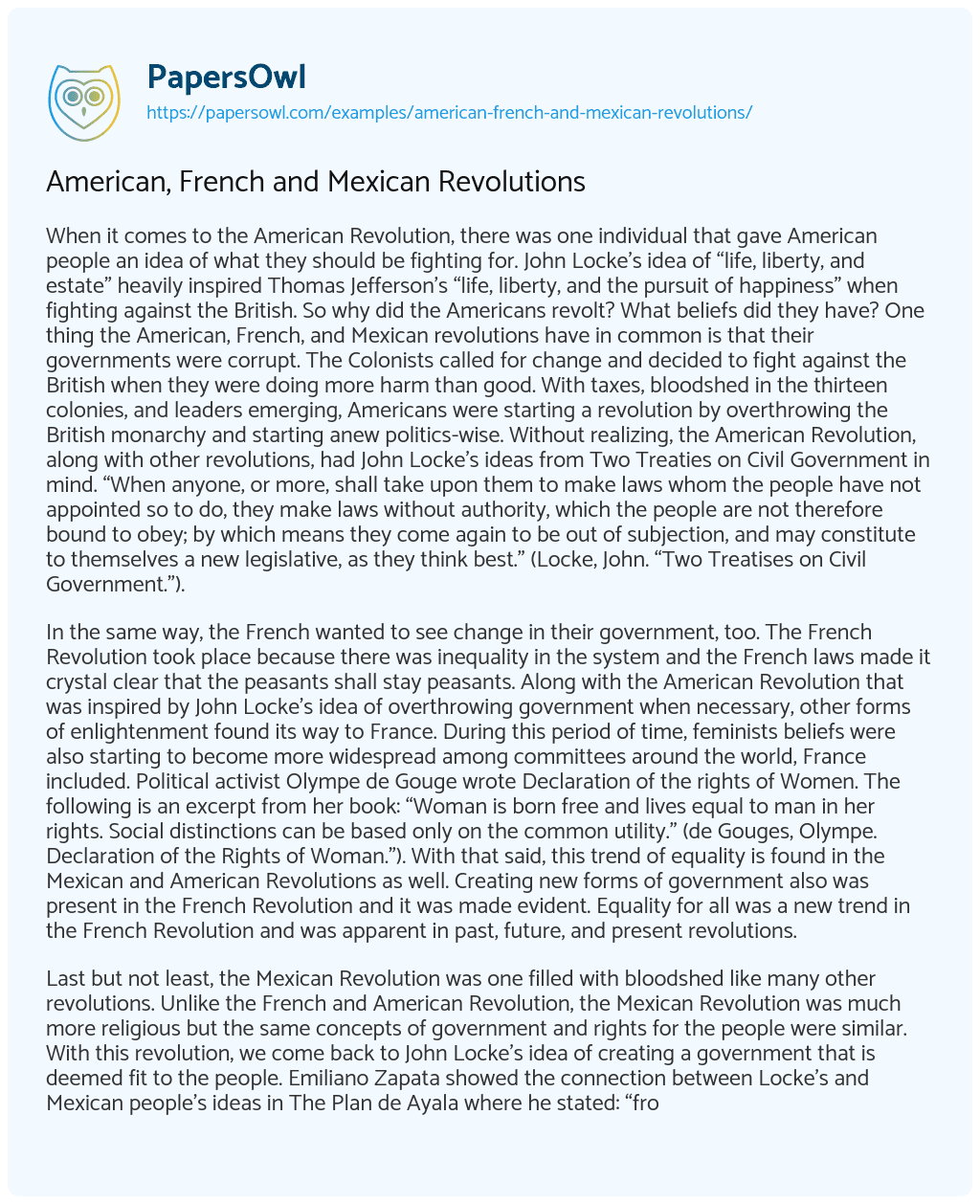 When it comes to the American Revolution, there was one individual that gave American people an idea of what they should be fighting for. John Locke’s idea of “life, liberty, and estate” heavily inspired Thomas Jefferson’s “life, liberty, and the pursuit of happiness” when fighting against the British. So why did the Americans revolt? What beliefs did they have? One thing the American, French, and Mexican revolutions have in common is that their governments were corrupt. The Colonists called for change and decided to fight against the British when they were doing more harm than good. With taxes, bloodshed in the thirteen colonies, and leaders emerging, Americans were starting a revolution by overthrowing the British monarchy and starting anew politics-wise. Without realizing, the American Revolution, along with other revolutions, had John Locke’s ideas from Two Treaties on Civil Government in mind. “When anyone, or more, shall take upon them to make laws whom the people have not appointed so to do, they make laws without authority, which the people are not therefore bound to obey; by which means they come again to be out of subjection, and may constitute to themselves a new legislative, as they think best.” (Locke, John. “Two Treatises on Civil Government.”).

In the same way, the French wanted to see change in their government, too. The French Revolution took place because there was inequality in the system and the French laws made it crystal clear that the peasants shall stay peasants. Along with the American Revolution that was inspired by John Locke’s idea of overthrowing government when necessary, other forms of enlightenment found its way to France. During this period of time, feminists beliefs were also starting to become more widespread among committees around the world, France included. Political activist Olympe de Gouge wrote Declaration of the rights of Women. The following is an excerpt from her book: “Woman is born free and lives equal to man in her rights. Social distinctions can be based only on the common utility.” (de Gouges, Olympe. Declaration of the Rights of Woman.”). With that said, this trend of equality is found in the Mexican and American Revolutions as well. Creating new forms of government also was present in the French Revolution and it was made evident. Equality for all was a new trend in the French Revolution and was apparent in past, future, and present revolutions.

Last but not least, the Mexican Revolution was one filled with bloodshed like many other revolutions. Unlike the French and American Revolution, the Mexican Revolution was much more religious but the same concepts of government and rights for the people were similar. With this revolution, we come back to John Locke’s idea of creating a government that is deemed fit to the people. Emiliano Zapata showed the connection between Locke’s and Mexican people’s ideas in The Plan de Ayala where he stated: “from today on we begin to continue the revolution begun by him, until we achieve the overthrow of the dictatorial powers which exist.” (Zapata, Emiliano. “The Plan de Ayala.”). In this quote, Zapata is saying that the Mexican people will continue to fight for change in these revolutionary times. Similar to the other revolutions, Mexican people took the concept of overthrowing their corrupt government and building it to be better than it was before.

The American and the French Revolutions

The French Revolutions Impact on Romantics

The Great Changes during French Revolution

Success and Justice of American Revolution