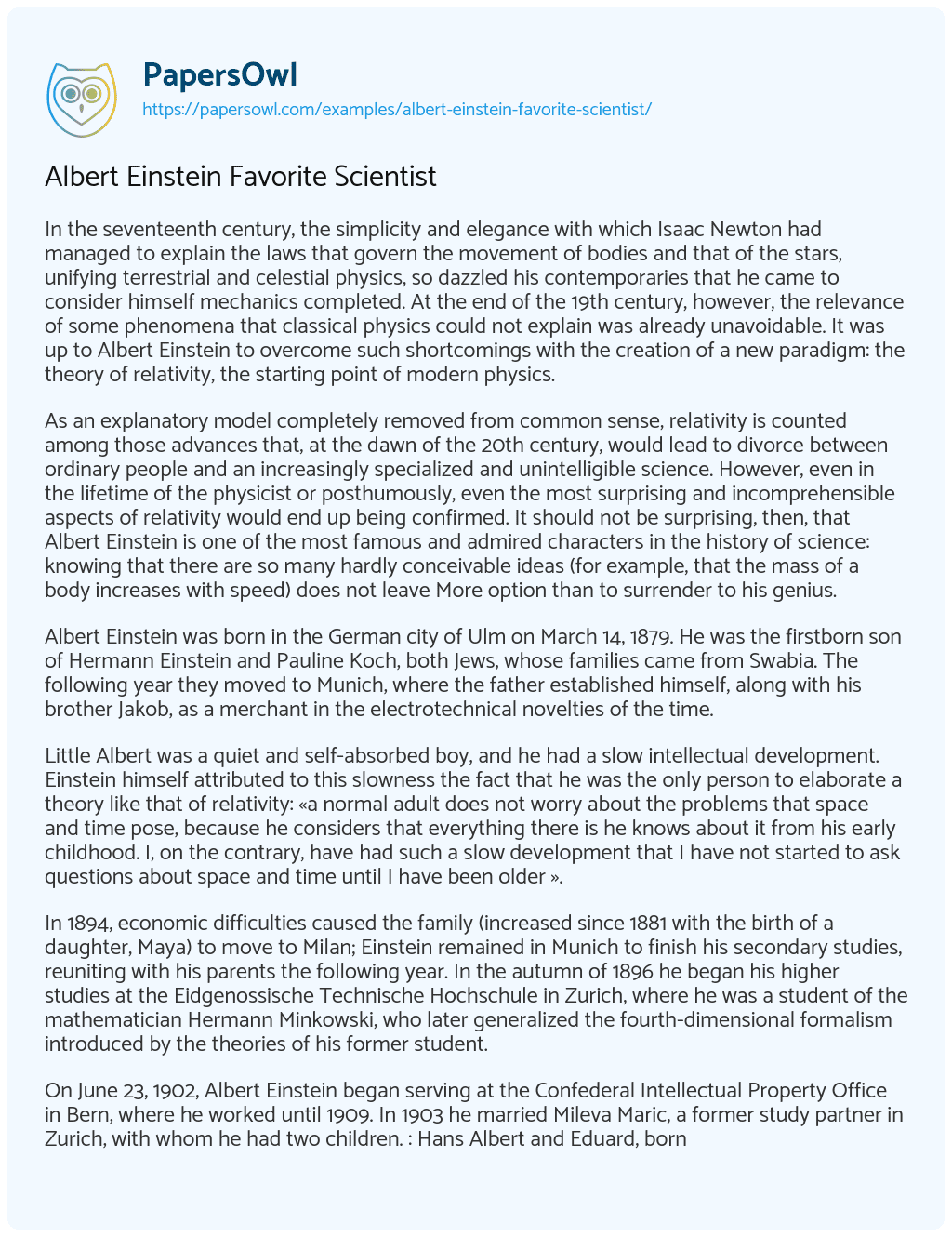 In the seventeenth century, the simplicity and elegance with which Isaac Newton had managed to explain the laws that govern the movement of bodies and that of the stars, unifying terrestrial and celestial physics, so dazzled his contemporaries that he came to consider himself mechanics completed. At the end of the 19th century, however, the relevance of some phenomena that classical physics could not explain was already unavoidable. It was up to Albert Einstein to overcome such shortcomings with the creation of a new paradigm: the theory of relativity, the starting point of modern physics.

As an explanatory model completely removed from common sense, relativity is counted among those advances that, at the dawn of the 20th century, would lead to divorce between ordinary people and an increasingly specialized and unintelligible science. However, even in the lifetime of the physicist or posthumously, even the most surprising and incomprehensible aspects of relativity would end up being confirmed. It should not be surprising, then, that Albert Einstein is one of the most famous and admired characters in the history of science: knowing that there are so many hardly conceivable ideas (for example, that the mass of a body increases with speed) does not leave More option than to surrender to his genius.

Albert Einstein was born in the German city of Ulm on March 14, 1879. He was the firstborn son of Hermann Einstein and Pauline Koch, both Jews, whose families came from Swabia. The following year they moved to Munich, where the father established himself, along with his brother Jakob, as a merchant in the electrotechnical novelties of the time.

Little Albert was a quiet and self-absorbed boy, and he had a slow intellectual development. Einstein himself attributed to this slowness the fact that he was the only person to elaborate a theory like that of relativity: «a normal adult does not worry about the problems that space and time pose, because he considers that everything there is he knows about it from his early childhood. I, on the contrary, have had such a slow development that I have not started to ask questions about space and time until I have been older ».

In 1894, economic difficulties caused the family (increased since 1881 with the birth of a daughter, Maya) to move to Milan; Einstein remained in Munich to finish his secondary studies, reuniting with his parents the following year. In the autumn of 1896 he began his higher studies at the Eidgenossische Technische Hochschule in Zurich, where he was a student of the mathematician Hermann Minkowski, who later generalized the fourth-dimensional formalism introduced by the theories of his former student.

On June 23, 1902, Albert Einstein began serving at the Confederal Intellectual Property Office in Bern, where he worked until 1909. In 1903 he married Mileva Maric, a former study partner in Zurich, with whom he had two children. : Hans Albert and Eduard, born respectively in 1904 and 1910. In 1919 they divorced, and Einstein remarried his cousin Elsa.

During 1905, he published five works in the Annalen der Physik: the first of them earned him a doctorate from the University of Zurich, and the remaining four would eventually impose a radical change in the image that science offers of the universe. Of these four, the first provided a theoretical explanation in statistical terms of Brownian motion (named after its discoverer, Robert Brown), and the second gave an interpretation of the photoelectric effect based on the hypothesis that light is composed of how many individual, later called photons. The remaining two works laid the foundations for the restricted theory of relativity, establishing the equivalence between the energy E of a certain amount of matter and its mass m in terms of the famous equation E = mc², where c is the speed of light , which is assumed constant.

Einstein’s effort immediately placed him among the most eminent of European physicists, but public recognition of the true scope of his theories was slow in coming; the Nobel Prize in Physics, which he received in 1921, was awarded exclusively ‘for his work on Brownian motion and his interpretation of the photoelectric effect.’ In 1909 he started his university teaching career in Zurich, then went to Prague and returned to Zurich in 1912 to become a professor at the Polytechnic, where he had studied.

In 1914 he went to Berlin as a member of the Prussian Academy of Sciences. The outbreak of the First World War forced him to separate from his family (then on vacation in Switzerland), who no longer rejoined him. Against the general sentiment of the Berlin academic community, Einstein spoke out for then openly anti-war, influenced in his attitudes by the pacifist doctrines of Romain Rolland.

On the scientific level, his activity focused, between 1914 and 1916, on the improvement of the general theory of relativity, based on the postulate that gravity is not a force but a field created by the presence of a mass in the space-time continuum. The confirmation of his forecasts came in 1919, when the solar eclipse of May 29 was photographed; The Times introduced him as the new Newton and his international fame grew, forcing him to multiply his outreach conferences around the world and popularizing his image as a third-class rail traveler, with a violin case under his arm.

For the next decade, Einstein concentrated his efforts on finding a mathematical relationship between electromagnetism and gravitational attraction, bent on advancing towards what, for him, should be the ultimate goal of physics: discovering the common laws that, supposedly, had of governing the behavior of all objects in the universe, from subatomic particles to stellar bodies, and grouping them into a single ‘unified field’ theory. Such research, which occupied the rest of his life, was unsuccessful and ended up causing him to be estranged from the rest of the scientific community. Beginning in 1933, with Hitler’s accession to power, his loneliness was compounded by the need to renounce German citizenship and move to the United States; Einstein spent the last twenty-five years of his life at the Institute for Advanced Study in Princeton, New Jersey, the city where he died on April 18, 1955.

Einstein once said that politics had a passing value, while an equation was valid for all eternity. In the last years of his life, the bitterness for not finding the formula that revealed the secret of the unity of the world had to be accentuated by the need he felt to intervene dramatically in the sphere of the political. In 1939, at the behest of physicists Leo Szilard and Eugene Paul Wigner, and convinced that the Germans were in a position to make an atomic bomb, he approached President Roosevelt urging him to launch a research program on atomic energy.

After the Hiroshima and Nagasaki explosions ended World War II, Einstein joined scientists looking for ways to prevent future use of the bomb and proposed the formation of a world government from the embryo consisting of the United Nations. But his proposals for humanity to avoid the threats of individual and collective destruction, formulated in the name of a singular amalgam of science, religion and socialism, received a rejection from politicians comparable to the respectful criticism that was provoked among scientists by their successive versions of the idea of ??a unified field.

Albert Einstein is still a mythical figure of our time; even more so than in life, if one takes into account that that photograph of him in which he exhibits an unusual gesture of mockery (sticking out his tongue in a comical and irreverent expression) has been elevated to the dignity of icon home after being made into a poster as common as those of the song idols and the Hollywood stars. However, it is not his scientific genius or his human stature that best explain him as myth, but, perhaps, the accumulation of paradoxes contained in his own biography, accentuated with historical perspective. The champion of pacifism Einstein is still remembered as the ‘father of the bomb’; and it is still common to attribute the demonstration of the principle that ‘everything is relative’ precisely to him, who fought bitterly against the possibility that knowing reality meant playing with the blind chicken.

Why is Albert Einstein a Genius

The Life of Albert Einstein