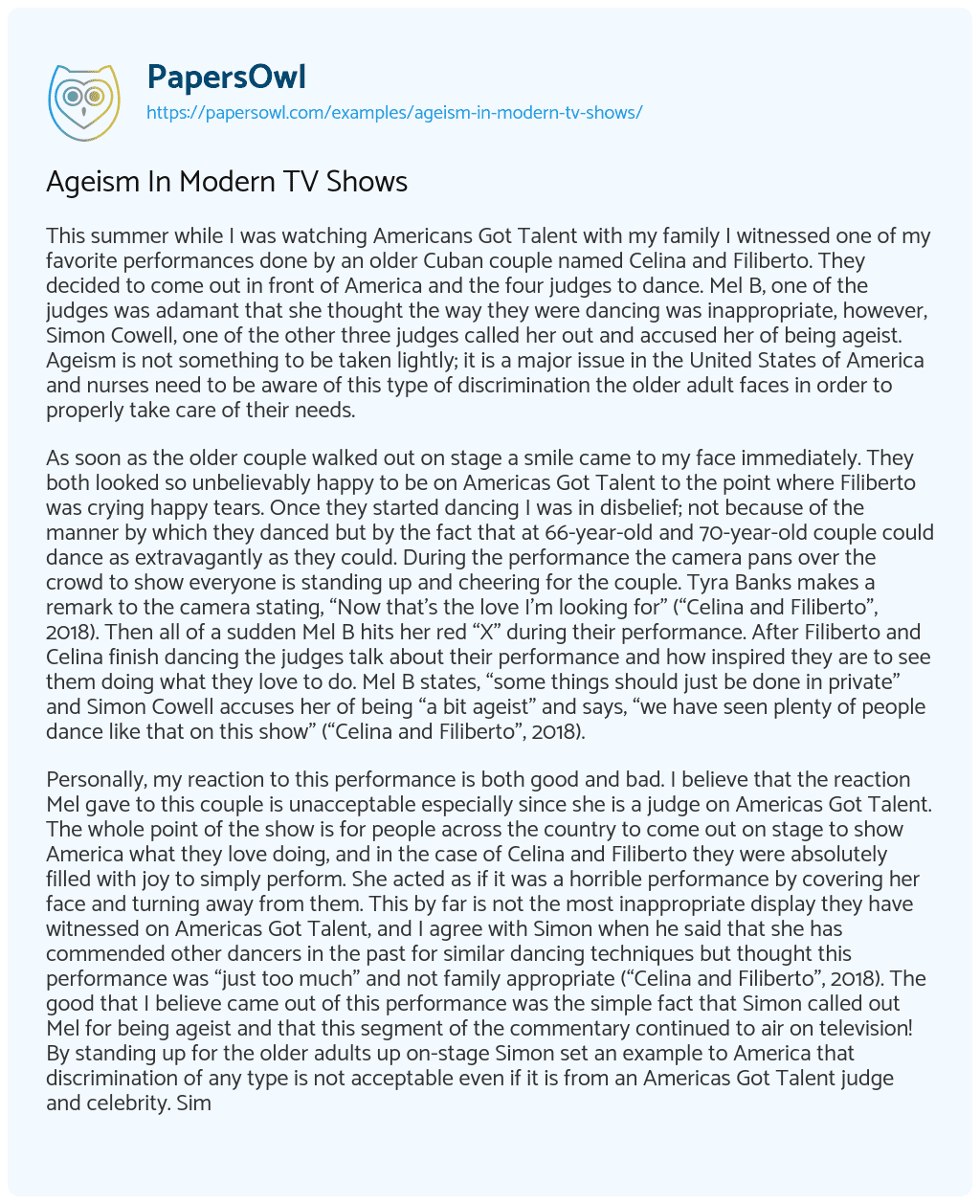 This summer while I was watching Americans Got Talent with my family I witnessed one of my favorite performances done by an older Cuban couple named Celina and Filiberto. They decided to come out in front of America and the four judges to dance. Mel B, one of the judges was adamant that she thought the way they were dancing was inappropriate, however, Simon Cowell, one of the other three judges called her out and accused her of being ageist. Ageism is not something to be taken lightly; it is a major issue in the United States of America and nurses need to be aware of this type of discrimination the older adult faces in order to properly take care of their needs.

As soon as the older couple walked out on stage a smile came to my face immediately. They both looked so unbelievably happy to be on Americas Got Talent to the point where Filiberto was crying happy tears. Once they started dancing I was in disbelief; not because of the manner by which they danced but by the fact that at 66-year-old and 70-year-old couple could dance as extravagantly as they could. During the performance the camera pans over the crowd to show everyone is standing up and cheering for the couple. Tyra Banks makes a remark to the camera stating, “Now that’s the love I’m looking for” (“Celina and Filiberto”, 2018). Then all of a sudden Mel B hits her red “X” during their performance. After Filiberto and Celina finish dancing the judges talk about their performance and how inspired they are to see them doing what they love to do. Mel B states, “some things should just be done in private” and Simon Cowell accuses her of being “a bit ageist” and says, “we have seen plenty of people dance like that on this show” (“Celina and Filiberto”, 2018).

Personally, my reaction to this performance is both good and bad. I believe that the reaction Mel gave to this couple is unacceptable especially since she is a judge on Americas Got Talent. The whole point of the show is for people across the country to come out on stage to show America what they love doing, and in the case of Celina and Filiberto they were absolutely filled with joy to simply perform. She acted as if it was a horrible performance by covering her face and turning away from them. This by far is not the most inappropriate display they have witnessed on Americas Got Talent, and I agree with Simon when he said that she has commended other dancers in the past for similar dancing techniques but thought this performance was “just too much” and not family appropriate (“Celina and Filiberto”, 2018). The good that I believe came out of this performance was the simple fact that Simon called out Mel for being ageist and that this segment of the commentary continued to air on television! By standing up for the older adults up on-stage Simon set an example to America that discrimination of any type is not acceptable even if it is from an Americas Got Talent judge and celebrity. Simon instantly recognized the discrimination, rectified the situation and by doing so he did the best thing possible to prevent this from happening in the future. On Mel’s part she probably did not set out to make a remark that would been seen as an ageist comment however, this goes to show how easy it is for the younger generation to be ignorant in regard to the older adult’s lifestyle. If Mel would be more knowledgeable or showed more respect to their performance and the sheer emotion they displayed simply by walking out on stage, this whole situation could have been handled differently.

Ageism is defined as “the process of systematic stereotyping of and discrimination against people because they are old” (Pritchard-Jones, 2014). Healthcare workers, nurses in particular, need to be aware of this type of discrimination due to the affect it has on the patient’s autonomy. Autonomy is the patients right to be involved with their own healthcare plan, and when the older adult is made to feel like they are less capable then the rest of society due to their age the result is a decreased sense of importance. In relation to the Americas Got Talent performance once Mel told the couple she thought the performance was inappropriate you could see the disappointment on their faces. This relates directly to healthcare workers, including nurses, who do not take the time to explain complex diagnosis to their older adult patients because they think their old age decreases their chances of understanding a complicated disease process. As well as those who do not consult treatment options with their older adult patients because they believe they are dependent on care givers, family members and the doctors judgement because they cannot make decisions for themselves (Pritchard-Jones, 2014). By being treated this way it “threatens the agents ability to act in a maximally autonomous way when making health related decisions, because of the effect such ageism has on an individual’s self-relations such as [their] feeling of self- worth, self-esteem and self-trust” (Pritchard-Jones, 2014).

With the older adult population growing in the United States it is important for nurses to understand the affects ageism has on the elderly. If more people stood up for those who they saw being blatantly discriminated against, such as Simon Cowell did on Americas Got Talent, then the older adult would not ashamed or afraid to talk about their health concerns with nurses and other members of the healthcare team. The more people who understand how detrimental ageism is to the self-esteem, take the time to become more informed regarding this issue, and gather more knowledge on the older adult in general will promote medical autonomy with the older adult.

The Definition of Ageism

An Argument against Ageism in the Society

Ageism in the Workplace