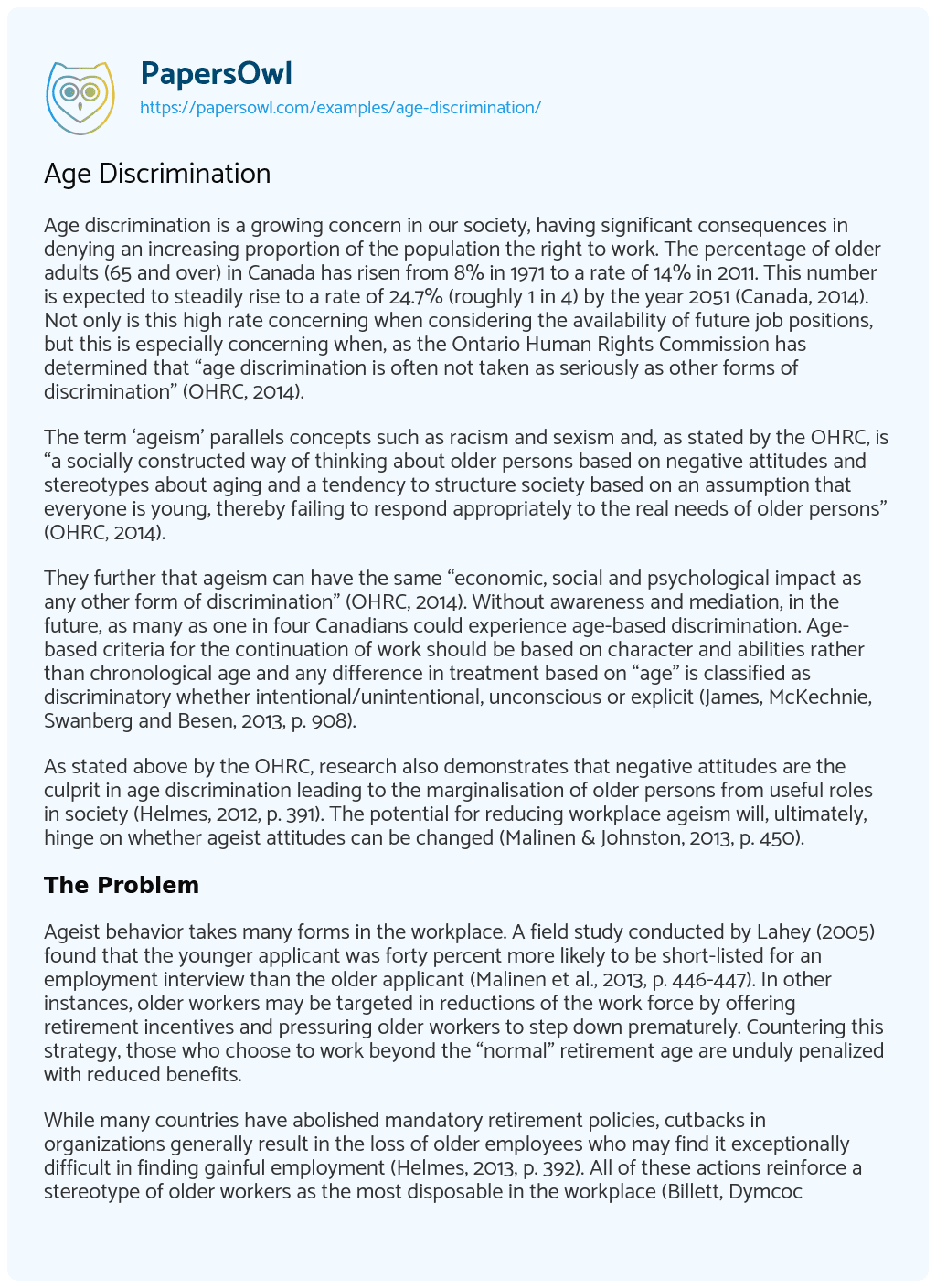 Age discrimination is a growing concern in our society, having significant consequences in denying an increasing proportion of the population the right to work. The percentage of older adults (65 and over) in Canada has risen from 8% in 1971 to a rate of 14% in 2011. This number is expected to steadily rise to a rate of 24.7% (roughly 1 in 4) by the year 2051 (Canada, 2014). Not only is this high rate concerning when considering the availability of future job positions, but this is especially concerning when, as the Ontario Human Rights Commission has determined that “age discrimination is often not taken as seriously as other forms of discrimination” (OHRC, 2014).

The term ‘ageism’ parallels concepts such as racism and sexism and, as stated by the OHRC, is “a socially constructed way of thinking about older persons based on negative attitudes and stereotypes about aging and a tendency to structure society based on an assumption that everyone is young, thereby failing to respond appropriately to the real needs of older persons” (OHRC, 2014).

They further that ageism can have the same “economic, social and psychological impact as any other form of discrimination” (OHRC, 2014). Without awareness and mediation, in the future, as many as one in four Canadians could experience age-based discrimination. Age-based criteria for the continuation of work should be based on character and abilities rather than chronological age and any difference in treatment based on “age” is classified as discriminatory whether intentional/unintentional, unconscious or explicit (James, McKechnie, Swanberg and Besen, 2013, p. 908).

As stated above by the OHRC, research also demonstrates that negative attitudes are the culprit in age discrimination leading to the marginalisation of older persons from useful roles in society (Helmes, 2012, p. 391). The potential for reducing workplace ageism will, ultimately, hinge on whether ageist attitudes can be changed (Malinen & Johnston, 2013, p. 450).

Ageist behavior takes many forms in the workplace. A field study conducted by Lahey (2005) found that the younger applicant was forty percent more likely to be short-listed for an employment interview than the older applicant (Malinen et al., 2013, p. 446-447). In other instances, older workers may be targeted in reductions of the work force by offering retirement incentives and pressuring older workers to step down prematurely. Countering this strategy, those who choose to work beyond the “normal” retirement age are unduly penalized with reduced benefits.

While many countries have abolished mandatory retirement policies, cutbacks in organizations generally result in the loss of older employees who may find it exceptionally difficult in finding gainful employment (Helmes, 2013, p. 392). All of these actions reinforce a stereotype of older workers as the most disposable in the workplace (Billett, Dymcock, Martin and Johnson 2009). Understanding what drives such discriminatory practices is important for current and future employees as well as employers (Billet, et al., 2009, p. 1249)

Age Diversity and Discrimination in the Workplace

Nurses are One of the Many Victims who Suffer from Discrimination