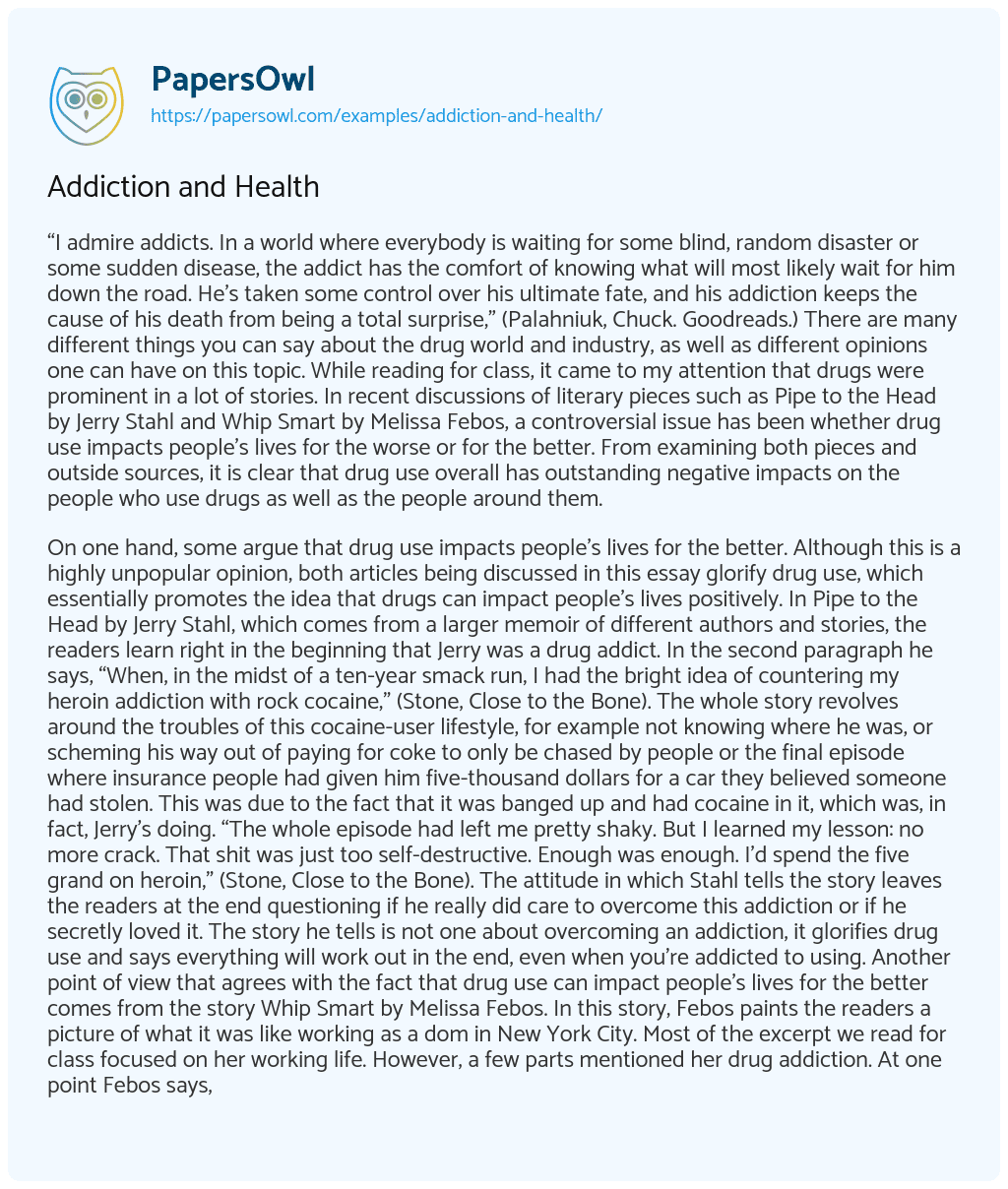 “I admire addicts. In a world where everybody is waiting for some blind, random disaster or some sudden disease, the addict has the comfort of knowing what will most likely wait for him down the road. He’s taken some control over his ultimate fate, and his addiction keeps the cause of his death from being a total surprise,” (Palahniuk, Chuck. Goodreads.) There are many different things you can say about the drug world and industry, as well as different opinions one can have on this topic. While reading for class, it came to my attention that drugs were prominent in a lot of stories. In recent discussions of literary pieces such as Pipe to the Head by Jerry Stahl and Whip Smart by Melissa Febos, a controversial issue has been whether drug use impacts people’s lives for the worse or for the better. From examining both pieces and outside sources, it is clear that drug use overall has outstanding negative impacts on the people who use drugs as well as the people around them.

On one hand, some argue that drug use impacts people’s lives for the better. Although this is a highly unpopular opinion, both articles being discussed in this essay glorify drug use, which essentially promotes the idea that drugs can impact people’s lives positively. In Pipe to the Head by Jerry Stahl, which comes from a larger memoir of different authors and stories, the readers learn right in the beginning that Jerry was a drug addict. In the second paragraph he says, “When, in the midst of a ten-year smack run, I had the bright idea of countering my heroin addiction with rock cocaine,” (Stone, Close to the Bone). The whole story revolves around the troubles of this cocaine-user lifestyle, for example not knowing where he was, or scheming his way out of paying for coke to only be chased by people or the final episode where insurance people had given him five-thousand dollars for a car they believed someone had stolen. This was due to the fact that it was banged up and had cocaine in it, which was, in fact, Jerry’s doing. “The whole episode had left me pretty shaky. But I learned my lesson: no more crack. That shit was just too self-destructive. Enough was enough. I’d spend the five grand on heroin,” (Stone, Close to the Bone). The attitude in which Stahl tells the story leaves the readers at the end questioning if he really did care to overcome this addiction or if he secretly loved it. The story he tells is not one about overcoming an addiction, it glorifies drug use and says everything will work out in the end, even when you’re addicted to using. Another point of view that agrees with the fact that drug use can impact people’s lives for the better comes from the story Whip Smart by Melissa Febos. In this story, Febos paints the readers a picture of what it was like working as a dom in New York City. Most of the excerpt we read for class focused on her working life. However, a few parts mentioned her drug addiction. At one point Febos says, “Despite the fact that I was high on heroin, I felt only fear,” (Febos, Whip Smart). She also says, “What was I, my mother’s daughter doing here? It suddenly didn’t make any sense. But that’s what the drugs were for: to keep Mom out of moments like this. Narcotics create distance, and I only needed an inch to turn away from that question,” (Febos, Whip Smart). During the story she mentions being on heroin although it is not the most important aspect of the piece. Because of this, readers are also left wondering if she cared to quit using drugs either, or if they gave her power at work when she was feeling weak. At the end of the excerpt of Whip Smart, we see Febos is extremely happy with this job. The ending sentence says, “On this peak… I was not only happy; I was also invincible,” (Febos, Whip Smart). There is no closure about what happens with her drug addiction, but readers can assume it was more of a loving relationship she had with drugs than a hateful one.

On the other hand, there are many resources explaining that, in fact, using drugs severely negatively impacts people’s lives. According to the Gateway Foundation, “Eventually, drugs can change how the brain works and interfere with a person’s ability to make choices, leading to intense cravings and compulsive drug use,” (Gateway Foundation, “Effects of Drug Abuse and Addiction”). This is saying when someone uses drugs, it alters their ability to make the right decisions which, in turn invites more of a hunger for the drug itself. In short, drug use enables poor judgment and addictive behavior. Another article I read states, “People with addiction often have one or more associated health issues, which could include lung or heart disease, stroke, cancer, or mental health conditions,” (National Institute on Drug Abuse, “Addiction and Health”). The same website says, “Drug use can also increase the risk of contracting infections. Human immunodeficiency virus (HIV) and hepatitis C (a serious liver disease) infection can occur from sharing injection equipment and from impaired judgment leading to unsafe sexual activity,” (National Institute on Drug Abuse, “Addiction and Health”). So not only do drugs impair people’s judgment, but they also lead to serious health issues which can result in death.

My own view is that drug use impacts people’s lives for the worse. No matter which drug we are talking about, and as everyone knows there are many of them, each drug is addictive in its own way. Because of this addiction it is hard for people to stop using drugs, even if they know it’s detrimental to their bodies and lives. Although some may object to this point of view and argue that not all drugs are so bad, such as marijuana for example, I would respond by saying that sure, using marijuana is not nearly as risky as using heroin or cocaine. However, getting into the habit of smoking marijuana is dangerous because it can lead to a person wanting to try something stronger since they think they can handle marijuana. An article I read on this issue states, “Marijuana users were 5 to 9 times as likely to experience an opioid problem 3 years later if they used marijuana occasionally,” (Psychology Today). It is, indeed, known as a gateway drug.

In conclusion, drug use has outstanding negative impacts on the people who use them. As stated previously, their judgment becomes impaired once on drugs which causes them to make poor decisions. Furthermore, people who use drugs are exposed to having horrible health risks and issues which could result in death. Even though both Pipe to the Head and Whip Smart idealize the “happy” lives people lead while on drugs, the addiction world is much darker than what is displayed on the surface level of these stories.

Drug Addiction is a Complex Disease

People with an Addiction have a Mental Illness

What is Drug Addiction?