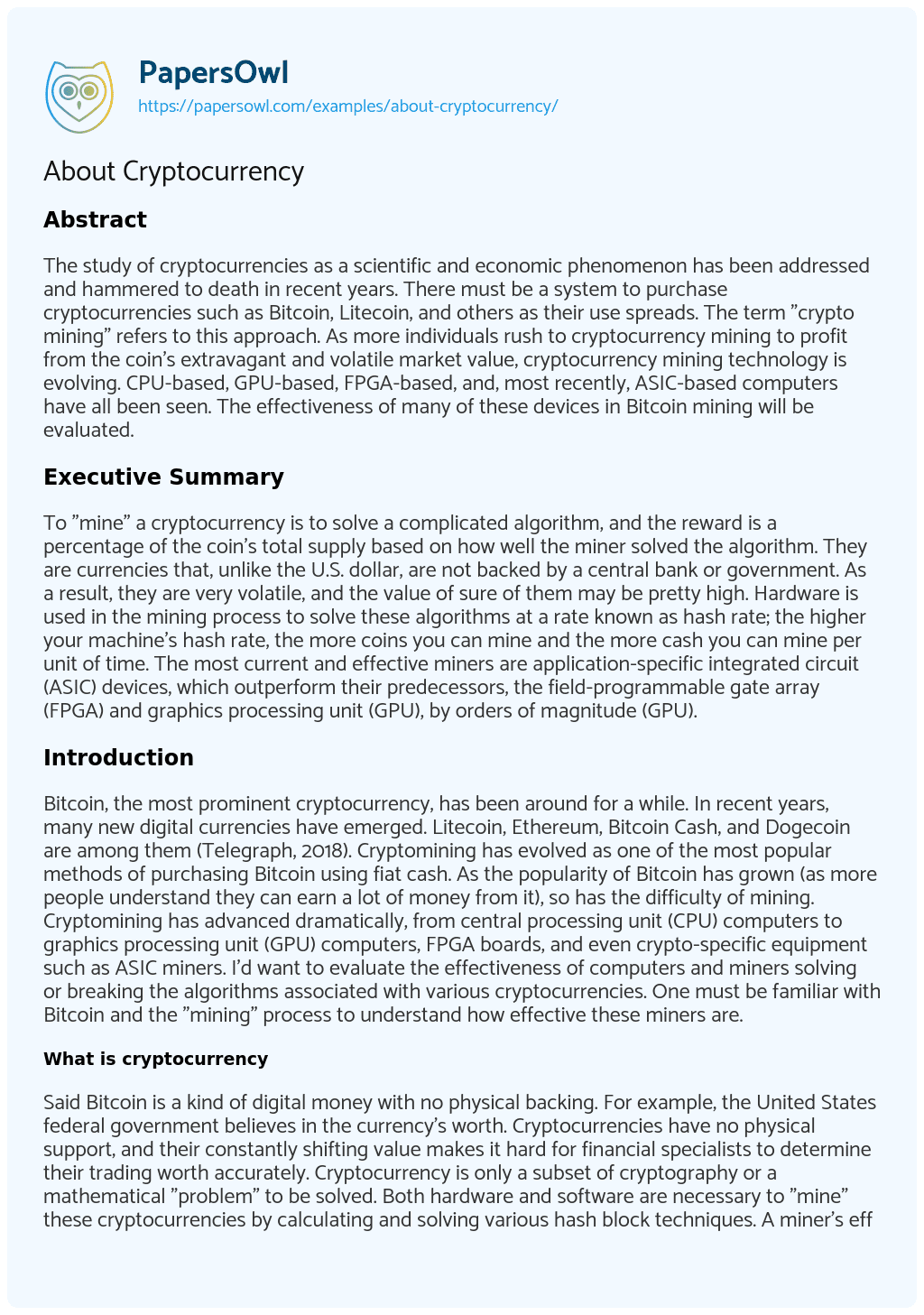 The study of cryptocurrencies as a scientific and economic phenomenon has been addressed and hammered to death in recent years. There must be a system to purchase cryptocurrencies such as Bitcoin, Litecoin, and others as their use spreads. The term “crypto mining” refers to this approach. As more individuals rush to cryptocurrency mining to profit from the coin’s extravagant and volatile market value, cryptocurrency mining technology is evolving. CPU-based, GPU-based, FPGA-based, and, most recently, ASIC-based computers have all been seen. The effectiveness of many of these devices in Bitcoin mining will be evaluated.

To “mine” a cryptocurrency is to solve a complicated algorithm, and the reward is a percentage of the coin’s total supply based on how well the miner solved the algorithm. They are currencies that, unlike the U.S. dollar, are not backed by a central bank or government. As a result, they are very volatile, and the value of sure of them may be pretty high. Hardware is used in the mining process to solve these algorithms at a rate known as hash rate; the higher your machine’s hash rate, the more coins you can mine and the more cash you can mine per unit of time. The most current and effective miners are application-specific integrated circuit (ASIC) devices, which outperform their predecessors, the field-programmable gate array (FPGA) and graphics processing unit (GPU), by orders of magnitude (GPU).

Bitcoin, the most prominent cryptocurrency, has been around for a while. In recent years, many new digital currencies have emerged. Litecoin, Ethereum, Bitcoin Cash, and Dogecoin are among them (Telegraph, 2018). Cryptomining has evolved as one of the most popular methods of purchasing Bitcoin using fiat cash. As the popularity of Bitcoin has grown (as more people understand they can earn a lot of money from it), so has the difficulty of mining. Cryptomining has advanced dramatically, from central processing unit (CPU) computers to graphics processing unit (GPU) computers, FPGA boards, and even crypto-specific equipment such as ASIC miners. I’d want to evaluate the effectiveness of computers and miners solving or breaking the algorithms associated with various cryptocurrencies. One must be familiar with Bitcoin and the “mining” process to understand how effective these miners are.

Said Bitcoin is a kind of digital money with no physical backing. For example, the United States federal government believes in the currency’s worth. Cryptocurrencies have no physical support, and their constantly shifting value makes it hard for financial specialists to determine their trading worth accurately. Cryptocurrency is only a subset of cryptography or a mathematical “problem” to be solved. Both hardware and software are necessary to “mine” these cryptocurrencies by calculating and solving various hash block techniques. A miner’s efficacy is determined by several factors, including the cryptocurrency being mined, the miner’s technology, and the cryptocurrency’s specific algorithm. For example, Bitcoin’s algorithm is a 256-bit integer that may be “mined” for a reward if correctly solved. A miner’s hash rate is the rate at which they can solve hash algorithms in hashes per second (h/s). Each Bitcoin hash is a 256-bit random integer ranging from 0 to its highest value. A reward is obtained if the hash value is less than the goal. If not, the client attempts again, increasing the number appended to the block, resulting in a new hash. (Serapiglia 46). This implies that graphics cards, meant to do repeated, basic tasks, are more suited to mining than central processing units, which are geared to handle less repetitive, more complicated problems. For this activity, ASIC miners, mainly designed to mine a single coin, are superior to GPU-based devices.

Because they involve repeating the same approach until a “winning number” is discovered, algorithms like Bitcoin’s SHA-256 are well suited for a graphics card-based miner. With the advancement of technologies such as Nvidia’s CUDA, a video card may be programmed in C or Python to do mathematical computations, at which they excel and are intended expressly. Matrix-based 3D graphics and improved calculation of when to output enabled graphics devices to perform more efficiently. In the same way, solving hashes may be used to “mine” digital money. Working with more enormous datasets presents challenges like needing more special equipment. This implies that graphics processing units require more transistors to execute each instruction. More hardware than a CPU requires more power, higher heat dissipation, and a more extensive design. 47 (Serapiglia). However, their core technology allows them to outperform CPUs when processing large volumes of primary data. The total hash rate has climbed from 7 mh/s to as high as 1.7 ph/s after the advent of GPU-based mining machines (Serapiglia).

FPGA miners have recently gained popularity because of their high efficiency and because all of their hardware may be dedicated to solving Bitcoin algorithms. Because of their versatility, graphics cards are not designed for this duty. FPGA miners are unique in that they can be changed to mine several coins by solving different algorithms (Dotemoto 32). They also have a lower carbon footprint, require less energy, and have fewer moving parts than traditional options. Various FPGA boards have different amounts of component and hardware space and electrical characteristics. The Nvidia GTX 1080 Ti is one of the most powerful Bitcoin mining graphics cards today, and the Xilinx BCU1525 is one of FPGA Guide’s flagship FPGA boards. In a variety of algorithms, the FPGA outperforms the 1080ti. For these algorithms, the FPGA obtains hash rates of 12.6, 40, and 12.6 gh/s, whereas the GPU achieves hash rates of 1.26, 3.8, and 1.24 gh/s while squandering roughly 200-250 watts of power (FPGA Guide). This demonstrates that FPGAs outperform GPUs in completing the most critical crypto-mining algorithms. Butterfly Labs, for example, has produced computers that use many FPGAs (16 in their instance) to solve algorithms.

The smallest and least expensive Jalapeno miner was rated at 4.5 gh/s and sold for USD 149. On the other hand, the $1299 SC Singles were ranked at 60 gh/s, pushing their performance to the next level. Finally, the $30,000 SC MiniRigs were rated at an unsustainable 1,500 gh/s (Taylor 7). The high energy consumption and temperature rise caused by so much equipment are excessive. Taylor claims that each MiniRig comprises sixteen Spartan-6 FPGAs and can generate between 2500 and 2700 watts of electricity. It’s a lot compared to the other available ways, but it’s reasonable, given the machine’s hash rates. While devices like the MiniRig could achieve unrivaled hash rates, their excessive resource consumption rendered them wasteful.

Specialized computers known as ASIC miners are built to calculate these algorithms to mine Bitcoin. ASICMiner, Avalon, and AntMiner are among the companies. ASIC stands for Application-Specific Integrated Circuits. Crypto-mining gear consists of specialized chips put on a motherboard and driven by a dedicated power supply, each of which is designed for a particular cryptocurrency’s mining algorithm (Martindale). ASIC miners come in a wide variety of sizes and hash rates. With a hash rate of 18,000 gh/s and power consumption of fewer than 1,620 watts, the EBIT E10 is one of the most efficient hash rates ASIC miners presently available. Despite the relatively large power output, we can see that the hash rate makes this system quite efficient (albeit far lower than that of the Butterfly MiniRig). The cost of $5230 is also much more manageable (Bitcoin Wiki). However, unlike FPGA-based mining equipment, most ASIC miners cannot be reprogrammed or updated to solve alternative algorithms. So, if you wanted to mine other cryptocurrencies, you’d have to buy a new ASIC miner. These miners, however, are presently the most prolific on the market, and their popularity seems to grow.

A large number of machines have been tested for use in crypto mining. Historically, computers with graphics processing units (GPUs) were the most efficient since they were the only viable choice for CPUs for solving algorithms regularly. However, as time passed, FPGA-based miners rose in popularity due to their capacity to solve various hashing algorithms and mine diverse currencies. They were better for the typical customer since they used less electricity and took up less space. These ASIC miners, with their tremendous hash rates, seem to be the future, assuming you can afford them and find a way to power them since they use a lot of electricity. It will be interesting to observe how far cryptocurrency mining has advanced, how significant it has become in our society, and whether miners will need to design new methods and equipment to get more coins.

About Cryptocurrency. (2019, Feb 05). Retrieved from https://papersowl.com/examples/about-cryptocurrency/

How to Explain Cryptocurrency to a Kid?

Cryptocurrency as the Christmas Gift

How to Use Cryptocurrency to Pay your Mortgage