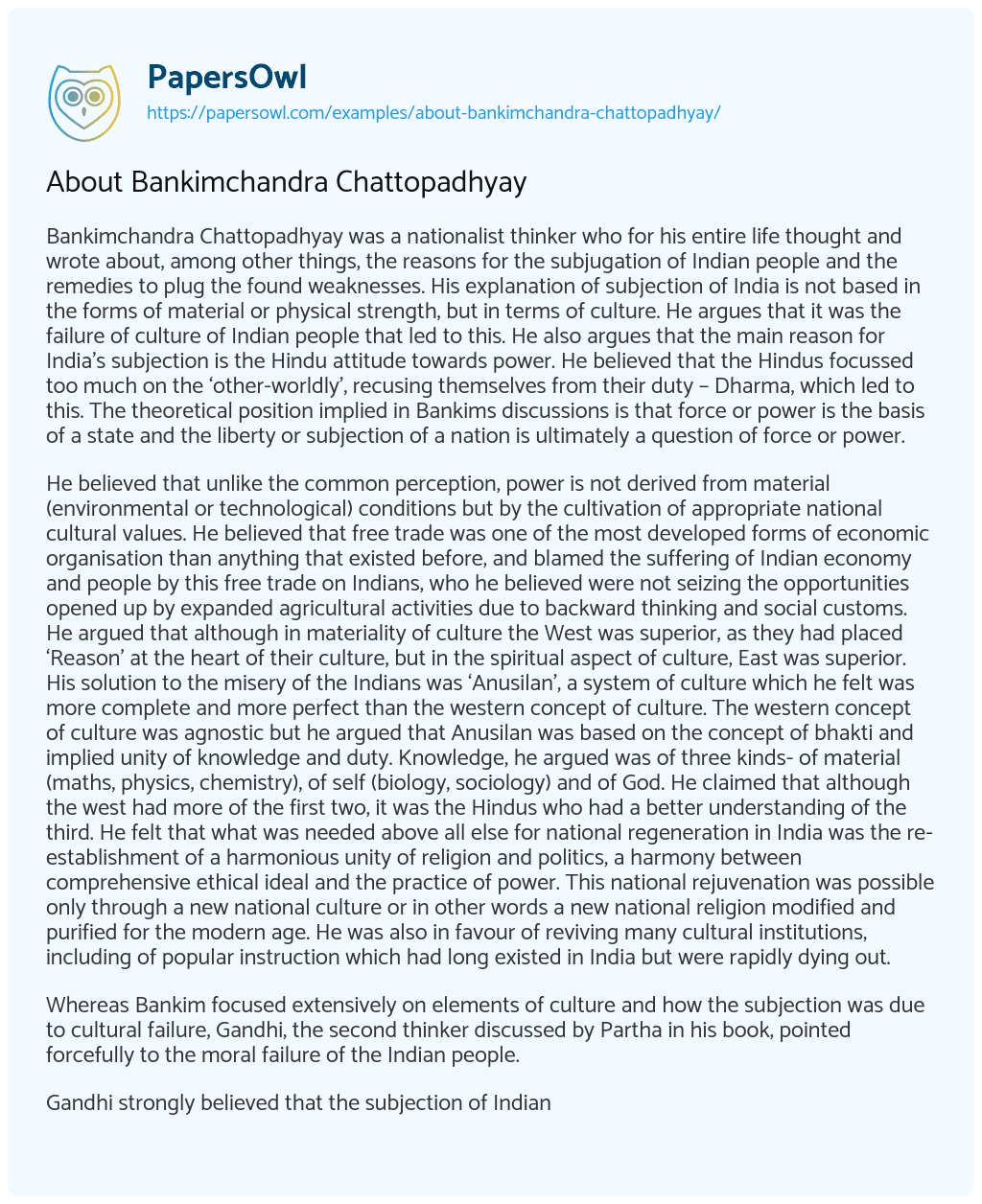 Bankimchandra Chattopadhyay was a nationalist thinker who for his entire life thought and wrote about, among other things, the reasons for the subjugation of Indian people and the remedies to plug the found weaknesses. His explanation of subjection of India is not based in the forms of material or physical strength, but in terms of culture. He argues that it was the failure of culture of Indian people that led to this. He also argues that the main reason for India’s subjection is the Hindu attitude towards power. He believed that the Hindus focussed too much on the ‘other-worldly’, recusing themselves from their duty – Dharma, which led to this. The theoretical position implied in Bankims discussions is that force or power is the basis of a state and the liberty or subjection of a nation is ultimately a question of force or power.

He believed that unlike the common perception, power is not derived from material (environmental or technological) conditions but by the cultivation of appropriate national cultural values. He believed that free trade was one of the most developed forms of economic organisation than anything that existed before, and blamed the suffering of Indian economy and people by this free trade on Indians, who he believed were not seizing the opportunities opened up by expanded agricultural activities due to backward thinking and social customs. He argued that although in materiality of culture the West was superior, as they had placed ‘Reason’ at the heart of their culture, but in the spiritual aspect of culture, East was superior. His solution to the misery of the Indians was ‘Anusilan’, a system of culture which he felt was more complete and more perfect than the western concept of culture. The western concept of culture was agnostic but he argued that Anusilan was based on the concept of bhakti and implied unity of knowledge and duty. Knowledge, he argued was of three kinds- of material (maths, physics, chemistry), of self (biology, sociology) and of God. He claimed that although the west had more of the first two, it was the Hindus who had a better understanding of the third. He felt that what was needed above all else for national regeneration in India was the re-establishment of a harmonious unity of religion and politics, a harmony between comprehensive ethical ideal and the practice of power. This national rejuvenation was possible only through a new national culture or in other words a new national religion modified and purified for the modern age. He was also in favour of reviving many cultural institutions, including of popular instruction which had long existed in India but were rapidly dying out.

Whereas Bankim focused extensively on elements of culture and how the subjection was due to cultural failure, Gandhi, the second thinker discussed by Partha in his book, pointed forcefully to the moral failure of the Indian people.

Gandhi strongly believed that the subjection of Indian people was not a failure of culture and hence the creation of a new culture in India would not help the cause. He also felt that Indians harbour illusions about the progressive qualities of modern civilization. He claimed that it was not the physical presence of British, but the civilisation subjugation which makes India a subject nation. He criticised modern civilisation for treating man as a limitless consumer and was responsible for opening the floodgates of industrial production. He felt

that treatment had made man a prisoner of his own cravings for luxury and self-indulgence. He was quite critical of modernisation and industrialisation and wanted India to shun this evil ideology which made man an endless consumer. Gandhi, as he himself states, did not think in terms of nationalism and claims not to be a nationalist. He had deep problems with nationalism, and during the years of the Indian struggle for independence, he used nationalism just as a tool to free the Indian people from subjugation. Gandhi also had a fascination with Truth, what it meant to him and how it should be seen. He talked about Truth being moral, not religious or historical or scientific. In some ways, Gandhi’s ideas can be seen as a variant of romanticism where there is a romantic longing for a return to an idealised medieval world of contentment, where the focus was more on the self than the worldly things. Gandhi had an immensely powerful moral critique of the existing state of politics. He was in many ways anti-political but had to combine his ideas with the practical organisational questions of a political movement. His solution to this was the ‘Satygrahis’- the ideal leaders who have been trained in the art of satyagrah and ahimsa, and who according to Gandhi would led the Indian masses with their exemplary actions. It can be said that there was a fundamental incompatibility between the utopianism which shaped the conception of Gandhi politics and the realities of power within a bourgeois constitutional order. Gandhi believed that true non-violent swaraj can come only by pursuing the program of rural construction and that the parliamentary programme could at best bring ‘political swaraj’ which was not ‘true swaraj’- an imagined utopia (Ramrajya) where there was political, economic and moral independence. Gandhi was also a proponent of production for self-consumption, not for sale or trade, as can be seen from his ideas on the Khadi programme in the later part of his life.

Instead he felt that the autonomy of the state was necessary for social justice, and hence there was a need to create a framework of institutions which can embody the spirit of progress and modernity. He claimed that the principal political task before the nation was to establish a sovereign national state which will stand above the narrow interests of groups and classes in society, plan and direct the economic progress in order to create enough social wealth to ensure welfare and justice for all.