A Theme of Independence in “Their Eyes were Watching God” 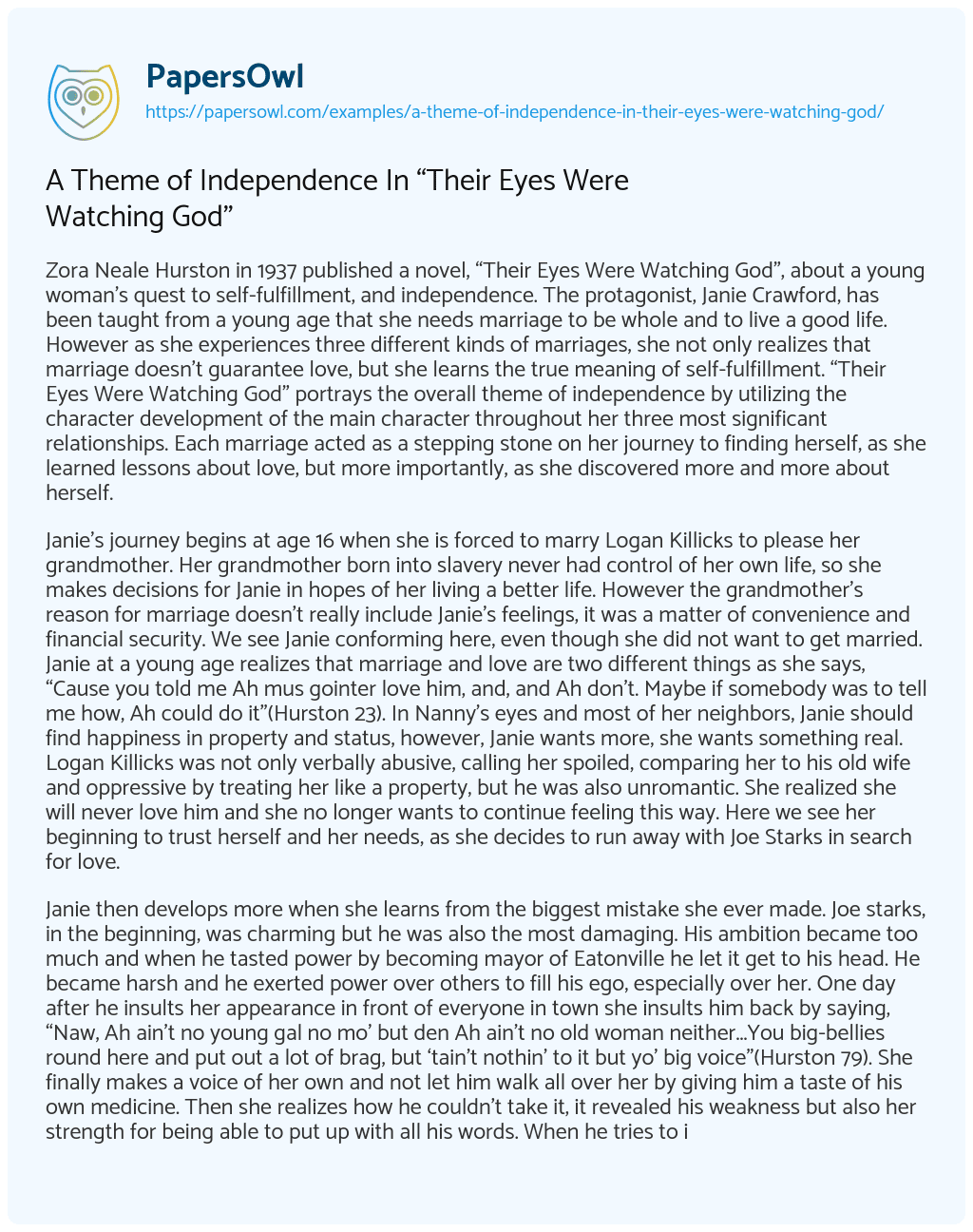 Zora Neale Hurston in 1937 published a novel, “Their Eyes Were Watching God”, about a young woman’s quest to self-fulfillment, and independence. The protagonist, Janie Crawford, has been taught from a young age that she needs marriage to be whole and to live a good life. However as she experiences three different kinds of marriages, she not only realizes that marriage doesn’t guarantee love, but she learns the true meaning of self-fulfillment. “Their Eyes Were Watching God” portrays the overall theme of independence by utilizing the character development of the main character throughout her three most significant relationships. Each marriage acted as a stepping stone on her journey to finding herself, as she learned lessons about love, but more importantly, as she discovered more and more about herself.

Janie’s journey begins at age 16 when she is forced to marry Logan Killicks to please her grandmother. Her grandmother born into slavery never had control of her own life, so she makes decisions for Janie in hopes of her living a better life. However the grandmother’s reason for marriage doesn’t really include Janie’s feelings, it was a matter of convenience and financial security. We see Janie conforming here, even though she did not want to get married. Janie at a young age realizes that marriage and love are two different things as she says, “Cause you told me Ah mus gointer love him, and, and Ah don’t. Maybe if somebody was to tell me how, Ah could do it”(Hurston 23). In Nanny’s eyes and most of her neighbors, Janie should find happiness in property and status, however, Janie wants more, she wants something real. Logan Killicks was not only verbally abusive, calling her spoiled, comparing her to his old wife and oppressive by treating her like a property, but he was also unromantic. She realized she will never love him and she no longer wants to continue feeling this way. Here we see her beginning to trust herself and her needs, as she decides to run away with Joe Starks in search for love.

Janie then develops more when she learns from the biggest mistake she ever made. Joe starks, in the beginning, was charming but he was also the most damaging. His ambition became too much and when he tasted power by becoming mayor of Eatonville he let it get to his head. He became harsh and he exerted power over others to fill his ego, especially over her. One day after he insults her appearance in front of everyone in town she insults him back by saying, “Naw, Ah ain’t no young gal no mo’ but den Ah ain’t no old woman neither…You big-bellies round here and put out a lot of brag, but ‘tain’t nothin’ to it but yo’ big voice”(Hurston 79). She finally makes a voice of her own and not let him walk all over her by giving him a taste of his own medicine. Then she realizes how he couldn’t take it, it revealed his weakness but also her strength for being able to put up with all his words. When he tries to insult her again she responds with power as she says, “Bur Ah ain’t goin’ outa here and Ah ain’t gointuh hush. Naw, you gointuh listen tuh me one time befo’ you die”(Hurston 86). All through their marriage, he has tried to silence her, as many men did back then as a way to fill their ego and keep their power. Janie ,however, realizes how much she has developed and how much more intelligent she has become. She was no longer going to let him weaken her mind and she realizes she does not need him, but rather he needs her.

Joe Starks death truly liberates Janie. She has become stronger and louder in her expression. She has been beaten down by him, but now she herself realizes the power she holds, as the narrator notes “The young girl was gone, by a handsome woman had taken her place. She tore off the Kerchief from her head and let down her plentiful hair. The weight, the length, the glory was there”(Hurston 87). She enjoys her newfound freedom and she knows she is worth much more than what she has had to deal with. We also see her develop into a feminist after this relationship as she notes the double standard that exists, with Joe always expecting her to take his insults, but having consequences when she’s the one making the insults.

Her last and the most meaningful relationship she had was with Tea Cake. Tea cake doesn’t want anything from her, he is truly in love with her and just wants to make her happy. Janie develops in this relationship as she learns about reality versus settling. In her other two marriages, she was in a way settling. Tea cake was not perfect, as he had gambling issues and even once hit her to make a point. However, she realizes their love for each other is bigger than their mistakes, and she accepts him without losing herself in the process. In fact, he reassures and motivates her to break the gender roles and stereotypes she has had to deal with her whole life. He teaches her how to play checkers, takes her fishing, and overall teaches her how to make herself happy, with and without him. The readers can see her full development and independence as she makes the decision to lose the most important person in her life in order to save herself “She threw up the barrel of the ride in frenzied hope and fear…the pistol and the rifle rang out almost together”(Hurston 184). If this was her first husband she wouldn’t have the strength to do it, but after all she has gone through and learned she values herself more and knows she can live a happy life even without her soulmate.

The last few quotes of the book tie together her development in a beautiful way as it says, “Here was peace. She pulled in her horizon like a great fish-net. Pulled it from around the waist of the world and draped it over her shoulder… she called in her soul to come and see”(Hurston 193). The peace she attains at the end reveals the true independence she now lives with. Janie is often looking toward the horizon wanting more in life, and she now fully understand her own power she posses in living her life the way she chooses. Overall we see a submissive unhappy young girl become a strong woman when she’s faced with the harsh reality of life. By ending the novel with Janie alone and content, the novel suggests that happiness does not always involve pleasing other people in general, rather it starts with focusing on themselves.

A Theme of Independence In “Their Eyes Were Watching God”. (2021, Mar 01). Retrieved from https://papersowl.com/examples/a-theme-of-independence-in-their-eyes-were-watching-god/