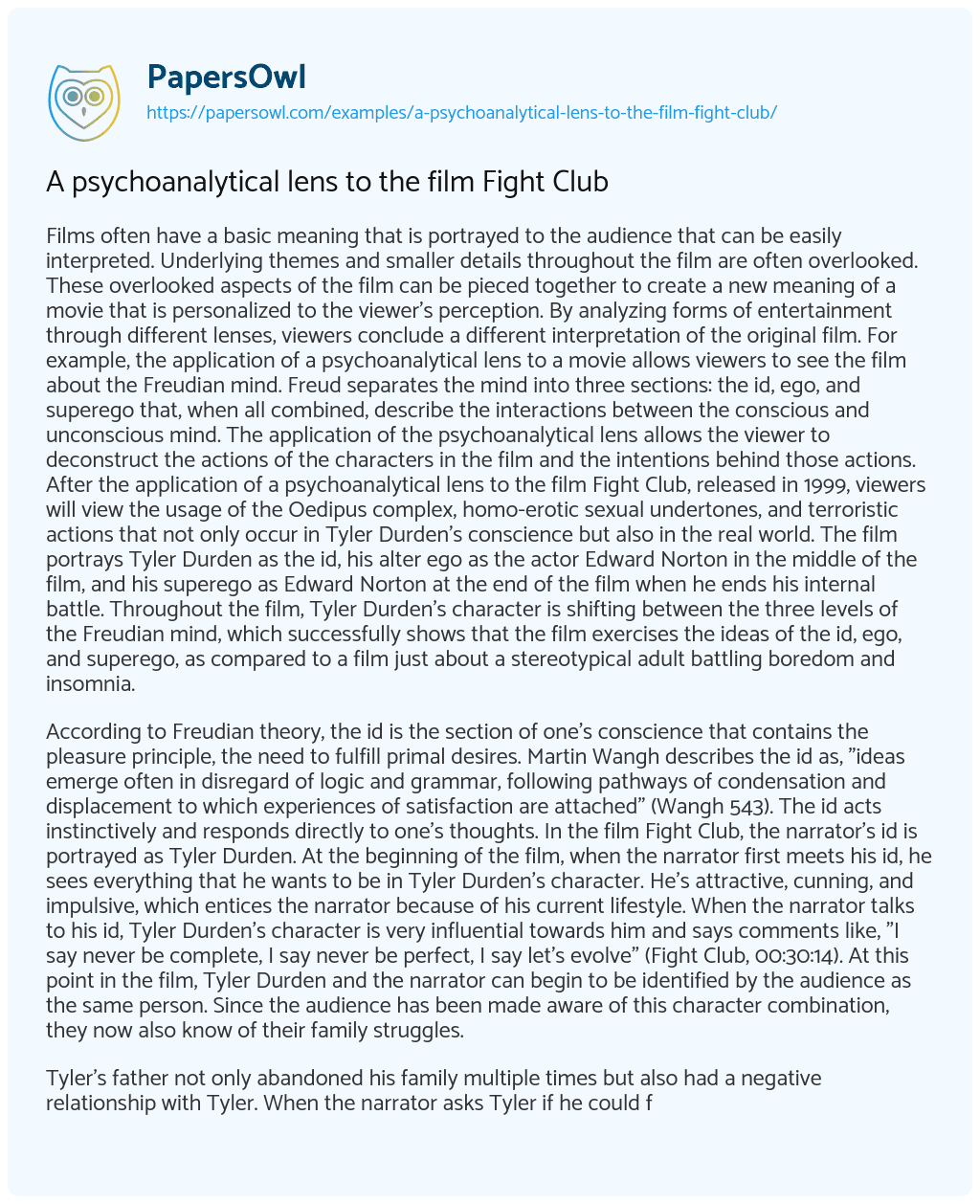 Films often have a basic meaning that is portrayed to the audience that can be easily interpreted. Underlying themes and smaller details throughout the film are often overlooked. These overlooked aspects of the film can be pieced together to create a new meaning of a movie that is personalized to the viewer’s perception. By analyzing forms of entertainment through different lenses, viewers conclude a different interpretation of the original film. For example, the application of a psychoanalytical lens to a movie allows viewers to see the film about the Freudian mind. Freud separates the mind into three sections: the id, ego, and superego that, when all combined, describe the interactions between the conscious and unconscious mind. The application of the psychoanalytical lens allows the viewer to deconstruct the actions of the characters in the film and the intentions behind those actions. After the application of a psychoanalytical lens to the film Fight Club, released in 1999, viewers will view the usage of the Oedipus complex, homo-erotic sexual undertones, and terroristic actions that not only occur in Tyler Durden’s conscience but also in the real world. The film portrays Tyler Durden as the id, his alter ego as the actor Edward Norton in the middle of the film, and his superego as Edward Norton at the end of the film when he ends his internal battle. Throughout the film, Tyler Durden’s character is shifting between the three levels of the Freudian mind, which successfully shows that the film exercises the ideas of the id, ego, and superego, as compared to a film just about a stereotypical adult battling boredom and insomnia.

According to Freudian theory, the id is the section of one’s conscience that contains the pleasure principle, the need to fulfill primal desires. Martin Wangh describes the id as, “ideas emerge often in disregard of logic and grammar, following pathways of condensation and displacement to which experiences of satisfaction are attached” (Wangh 543). The id acts instinctively and responds directly to one’s thoughts. In the film Fight Club, the narrator’s id is portrayed as Tyler Durden. At the beginning of the film, when the narrator first meets his id, he sees everything that he wants to be in Tyler Durden’s character. He’s attractive, cunning, and impulsive, which entices the narrator because of his current lifestyle. When the narrator talks to his id, Tyler Durden’s character is very influential towards him and says comments like, “I say never be complete, I say never be perfect, I say let’s evolve” (Fight Club, 00:30:14). At this point in the film, Tyler Durden and the narrator can begin to be identified by the audience as the same person. Since the audience has been made aware of this character combination, they now also know of their family struggles.

Tyler’s father not only abandoned his family multiple times but also had a negative relationship with Tyler. When the narrator asks Tyler if he could fight one person in that exact moment he replies, “I’d fight my dad” (0:39:23). Through the rest of the conversation about their parents, the narrator repeatedly says that he is ” a thirty-year-old boy” (0:40:44). From this scene, we are not only able to conclude that both characters have bitter feelings towards their father, but also that their comments are references to the Oedipus Complex because they refer to themselves as “boys” versus “men”. Tyler finishes the conversation by saying, “We are a generation of men raised by women” (0:40:19). During this conversation, both characters are expressing their repressed feelings of hatred towards their parent of the same sex. The conversation in this scene is very important in the application of the Oedipus Complex because it is not only the narrator that is expressing these feelings but also Tyler. Since Tyler is also expressing these negative feelings towards his father, it shows us that the animosity a child displays towards his father is purely unconscious. The unconscious is what the id is in its purest form, which also happens to be Tyler.

The ego is the part of the Freudian mind that tries to constantly satisfy the id and does so by using realistic strategy. The ego does this by existing in the real world and is heavily influenced by one’s past experiences and memories. The ego is an unconscious state that checks the desires of the id and makes sure they are realistic and acceptable in the real world. Furthermore, Klein states that the ego “attempts to save the loved object, to repair and restore it, attempts which in the state of depression are coupled with despair . . . are determining factors for all sublimation and the whole of . . . ego development” (Klein 124). Tyler Durden’s alter ego, the narrator, is portrayed as the ego in the middle of the film. The narrator makes personal sacrifices for Tyler to ensure the success of the club. He effectively stages his boss by beating himself in his boss’s office which in return gives him the resources that he and Tyler need to run Fight Club. After the narrator stages his boss he says, “A telephone, computer, fax machine, fifty-two weekly paychecks, forty-eight air flight coupons, and now corporate sponsorship…” (1:18:32). The narrator provides everything the club needs so that it can grow and be successful which confirms his role as the ego. The narrator is satisfying Tyler Durden’s personal needs through self-harm and potentially losing his job.

The narrator is also progressively becoming more like Tyler Durden as the film continues. At the beginning of the film, before he met Tyler, the narrator never smokes cigarettes. By the end, the narrator is smoking cigarettes at work in front of his boss. The narrator doesn’t only satisfy Tyler’s needs but also is becoming more like him due to his repressed feelings for Tyler. Tyler is everything the narrator wishes he could be. The narrator often hints towards his feelings with comments such as, “Why do you still waste time with her,” referring to Tyler’s current love interest Marla. Tyler also starts to favor another member of Fight Club named Angel Face over the narrator. The narrator realizes Tyler’s favoritism towards Angel Face and says, “I am Jack’s inflamed sense of rejection” (1:33:14). The narrator later beats Angel Face in a fight until his face is unrecognizable which causes Angel Face to be hospitalized. These comments from the narrator along with his jealousy towards Angel Face can be interpreted as homoerotic from a Freudian standpoint. The narrator’s hostility towards both Marla and Angel’s face comes from a sexual desire for Tyler. This desire isn’t in the form of the narrator wanting to physically be in a sexual relationship with Tyler but the narrator aspiring to be Tyler because Tyer represents the narrator’s sexual desire and appeal.

The superego, also known as the conscience, is the element of the Freudian mind that acts as the moral compass. Like the ego, past experiences and memories can affect the presence of the superego. The purpose of the superego is to not only please oneself but also to ensure the prosperity of others. The narrator’s transition from the ego to the superego can be seen near the end of the movie when Tyler doesn’t include the narrator in “Project Mayhem”, a terrorist organization whose central goal is to destroy modern civilization. Since the narrator is slowly beginning to distrust Tyler, he begins to understand that Project Mayhem is a plan solely based on crime and unlawful acts which he knows are wrong. Tyler senses the narrator’s shift in thinking and therefore expands Project Mayhem which results in the death of one of the members during an accident revolving around the destruction of a monument. After the incident, the rest of the group wants to bury the body behind their headquarters but the narrator realizes that this act would be unjust and therefore doesn’t allow it to happen. This act not only shows that the narrator has a sense of right and wrong but also what is morally correct.

Another example of the narrator transitioning from the ego to the superego is when he is fighting Tyler, which is actually himself, in the final scene of the movie. The audience can gather that the narrator is actually fighting himself because Tyler says, “You are now firing a gun at your imaginary friend” (2:07:17). The audience also can see the narrator physically punching and throwing himself, through camera footage in the parking garage, where the fight is taking place. The narrator fights Tyler extensively but realized that the only way he can destroy his id is by killing himself. In an attempt to destroy his id, the narrator tries to kill himself by shooting himself through the mouth. Before he pulls the trigger he says, “I’m not doing this, we are doing this…” (2:10:31). The attempted suicide causes Tyler to vanish and leaves the narrator with severe injuries. This final act solidifies the narrator’s role as the superego. The narrator has the ability to make decisions that overpower his id and that are morally correct. Throughout the end of the film, the narrator can be seen making this transition through his actions that cause the destruction of Tyler which in turn allows the narrator to become “himself”.

By using a psychoanalytical lens, viewers are able to conclude a new meaning from a film that wasn’t originally conceptualized. The new meaning can be gathered through the criticisms used from a particular lens. The criticisms of a psychoanalytical lens are focused on the application of the Freudian mind to the film and see how the id, ego, and superego can be seen throughout the movie. In the movie Fight Club, the application of a psychoanalytical lens allows viewers to view the differences in the narrator’s conscience as well as his transition through the id, ego, and superego as the movie progresses as well as the power struggles that go along with these transitions. The new meaning gathered from the application of the lens alters from the original meaning of the film because it shows the different aspects of the narrator’s mind compared to the original meaning of the film.

A psychoanalytical lens to the film Fight Club. (2020, Feb 01). Retrieved from https://papersowl.com/examples/a-psychoanalytical-lens-to-the-film-fight-club/

The Loneliness in the Film Fight Club