A Problem of Social Injustices 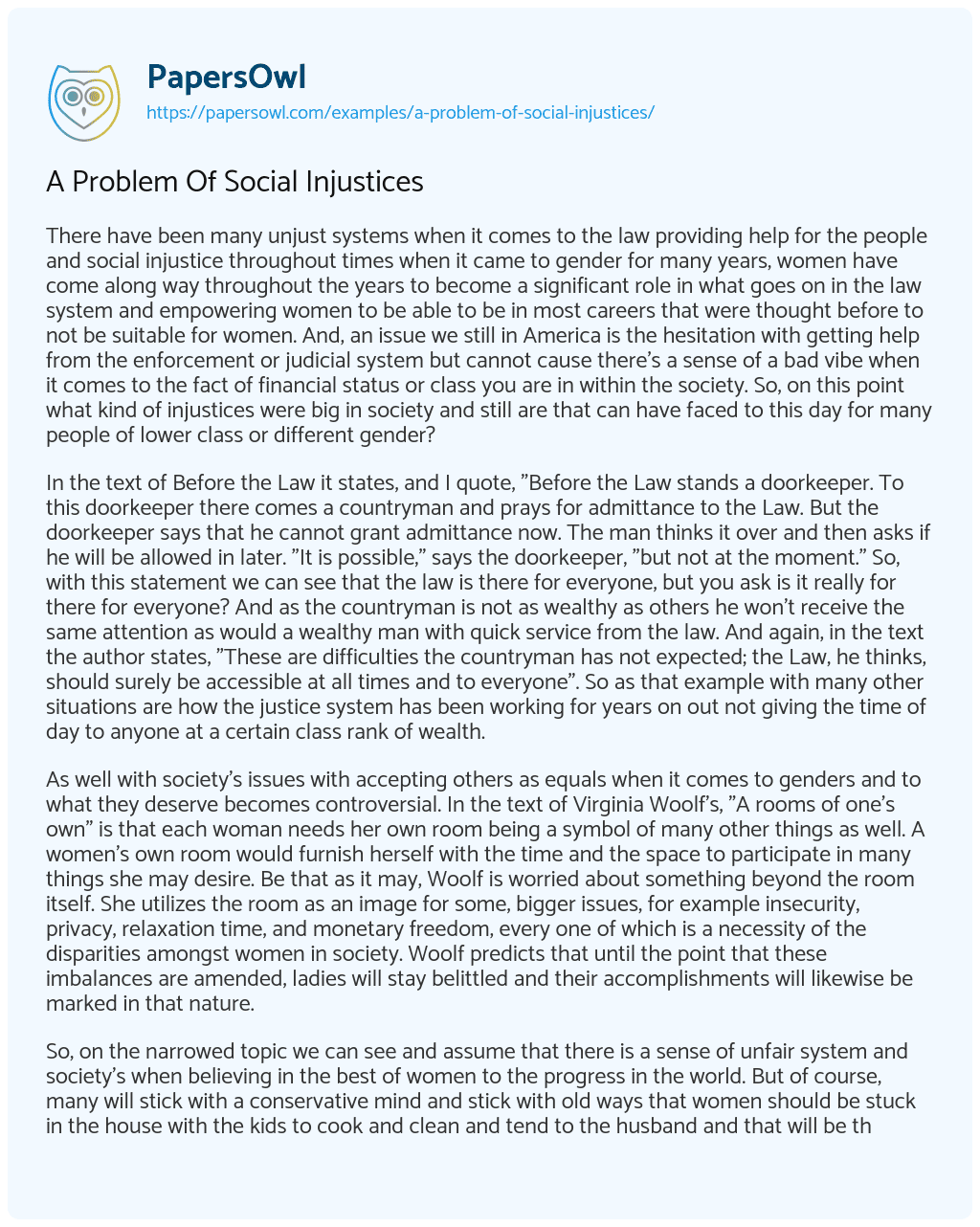 There have been many unjust systems when it comes to the law providing help for the people and social injustice throughout times when it came to gender for many years, women have come along way throughout the years to become a significant role in what goes on in the law system and empowering women to be able to be in most careers that were thought before to not be suitable for women. And, an issue we still in America is the hesitation with getting help from the enforcement or judicial system but cannot cause there’s a sense of a bad vibe when it comes to the fact of financial status or class you are in within the society. So, on this point what kind of injustices were big in society and still are that can have faced to this day for many people of lower class or different gender?

In the text of Before the Law it states, and I quote, “Before the Law stands a doorkeeper. To this doorkeeper there comes a countryman and prays for admittance to the Law. But the doorkeeper says that he cannot grant admittance now. The man thinks it over and then asks if he will be allowed in later. “It is possible,” says the doorkeeper, “but not at the moment.” So, with this statement we can see that the law is there for everyone, but you ask is it really for there for everyone? And as the countryman is not as wealthy as others he won’t receive the same attention as would a wealthy man with quick service from the law. And again, in the text the author states, “These are difficulties the countryman has not expected; the Law, he thinks, should surely be accessible at all times and to everyone”. So as that example with many other situations are how the justice system has been working for years on out not giving the time of day to anyone at a certain class rank of wealth.

As well with society’s issues with accepting others as equals when it comes to genders and to what they deserve becomes controversial. In the text of Virginia Woolf’s, “A rooms of one’s own” is that each woman needs her own room being a symbol of many other things as well. A women’s own room would furnish herself with the time and the space to participate in many things she may desire. Be that as it may, Woolf is worried about something beyond the room itself. She utilizes the room as an image for some, bigger issues, for example insecurity, privacy, relaxation time, and monetary freedom, every one of which is a necessity of the disparities amongst women in society. Woolf predicts that until the point that these imbalances are amended, ladies will stay belittled and their accomplishments will likewise be marked in that nature.

So, on the narrowed topic we can see and assume that there is a sense of unfair system and society’s when believing in the best of women to the progress in the world. But of course, many will stick with a conservative mind and stick with old ways that women should be stuck in the house with the kids to cook and clean and tend to the husband and that will be there sole purpose forever, which is the reason why I believe we never prosper as a society or as a country in general and to the other countries all around the world if stuck with that type of mindset towards women. Now in her text we can see how the topic can controversial, and I quote “When a subject is highly controversial, one cannot hope to tell the truth. One can only show how one came to hold whatever opinion one does hold. To present the supposition is the main thing that a man can really “demonstrate,” she fictionalizes her text, “Fiction is likely to contain more truth than fact.” Reality isn’t objective, rather it is dependent upon the conditions of one’s own reality. So, coming to the point of what women need that Woolf explain in her text that is a basic need for all women is power and money, there Financial status just like with the countryman in before the law.

Money is the element that keeps women from having their own room, and in this way, having money is critical to the fact of having power. Woolf expresses, ” Intellectual freedom depends upon material things. Poetry depends upon intellectual freedom. And women have always been poor, not for two hundred years merely, but from the beginning of time . . .”. Woolf uses one of her quotes to explain why very few women have been for writing successful poetry during her time. So, without money we can assume that the Woolf implied that women will remain in second place to their male partners in this society. The financial difference between men and women at the time of Woolf’s writing made the myth that women were less successful. But within all of it women have been going through many differences when coming against men, and receiving many or as Woolf’s symbolizes a room for their own, that society will have their opinions and through time women would become a major part of the government system and being to have power to speak for themselves, but using this as an example we face the injustices with other types of genders when it comes to prejudice people, and people of lower class standards when facing hesitation of the government and judicial help in there time of need of any important situation they may face, as the countryman stated he thought the law was always supposed to be there for anyone, but seeing now the clear picture of corruption within the system. That they only willing to help wealthy induvial or families. So, in conclusion we have overcome many obstacles with change of how society works to modern day but as they say there will be a bad apple within the bunch.

A Problem Of Social Injustices. (2019, Dec 30). Retrieved from https://papersowl.com/examples/a-problem-of-social-injustices/

Professions for Women by Virginia Woolf

Virginia Woolf’s Book “A Room of Ones Own”