A Letter to a Friend 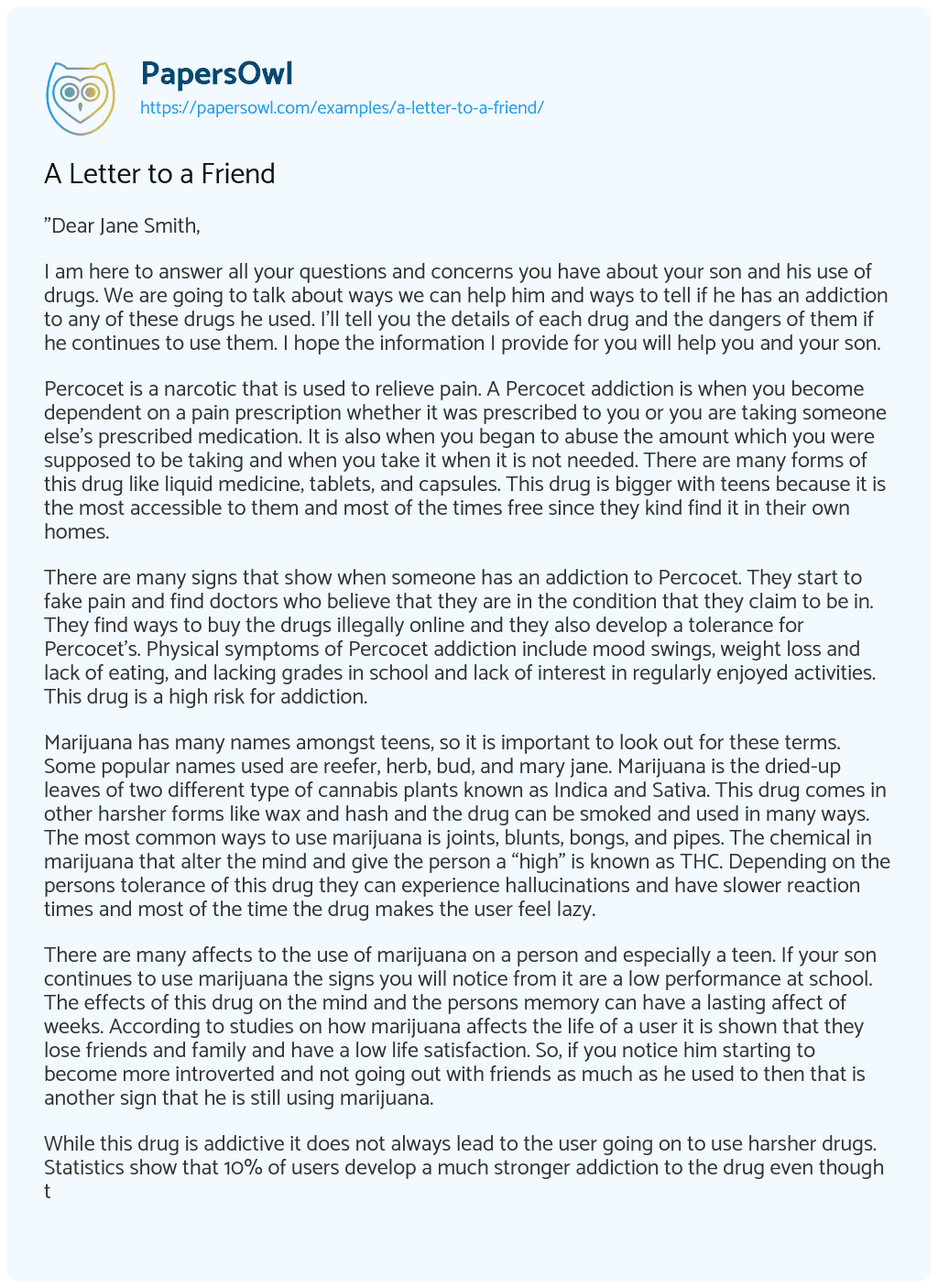 I am here to answer all your questions and concerns you have about your son and his use of drugs. We are going to talk about ways we can help him and ways to tell if he has an addiction to any of these drugs he used. I’ll tell you the details of each drug and the dangers of them if he continues to use them. I hope the information I provide for you will help you and your son.

Percocet is a narcotic that is used to relieve pain. A Percocet addiction is when you become dependent on a pain prescription whether it was prescribed to you or you are taking someone else’s prescribed medication. It is also when you began to abuse the amount which you were supposed to be taking and when you take it when it is not needed. There are many forms of this drug like liquid medicine, tablets, and capsules. This drug is bigger with teens because it is the most accessible to them and most of the times free since they kind find it in their own homes.

There are many signs that show when someone has an addiction to Percocet. They start to fake pain and find doctors who believe that they are in the condition that they claim to be in. They find ways to buy the drugs illegally online and they also develop a tolerance for Percocet’s. Physical symptoms of Percocet addiction include mood swings, weight loss and lack of eating, and lacking grades in school and lack of interest in regularly enjoyed activities. This drug is a high risk for addiction.

Marijuana has many names amongst teens, so it is important to look out for these terms. Some popular names used are reefer, herb, bud, and mary jane. Marijuana is the dried-up leaves of two different type of cannabis plants known as Indica and Sativa. This drug comes in other harsher forms like wax and hash and the drug can be smoked and used in many ways. The most common ways to use marijuana is joints, blunts, bongs, and pipes. The chemical in marijuana that alter the mind and give the person a “high” is known as THC. Depending on the persons tolerance of this drug they can experience hallucinations and have slower reaction times and most of the time the drug makes the user feel lazy.

There are many affects to the use of marijuana on a person and especially a teen. If your son continues to use marijuana the signs you will notice from it are a low performance at school. The effects of this drug on the mind and the persons memory can have a lasting affect of weeks. According to studies on how marijuana affects the life of a user it is shown that they lose friends and family and have a low life satisfaction. So, if you notice him starting to become more introverted and not going out with friends as much as he used to then that is another sign that he is still using marijuana.

While this drug is addictive it does not always lead to the user going on to use harsher drugs. Statistics show that 10% of users develop a much stronger addiction to the drug even though they know it gets in the way of daily life and comes with consequences. While others become addicted and others don’t it is all due to genetics, the age the users start smoking it, and the relationship they have with family and friends. Statistics also show that if the user started using before the age of 18 than they are more likely to develop this addiction disorder to marijuana.

Marijuana, while not as addictive as Percocet, does have its own set of withdrawal symptoms. The symptoms include anxiety, cravings for drugs, loss of weight do to no appetite, and irritability. The users who suffer these symptoms are not aware that they are acting like this and that they don’t even know they are going through withdrawal. These are symptoms you should look out for with your son and if you notice them then it is good to start helping him not use marijuana anymore and help him get back on track with school and life since he is still young.

The use of alcohol is very common among your sons age. In the United States teenage drinking is one of the biggest health problems besides obesity. Statistics show that 60% of teens have used alcohol once before they turned eighteen. From the ages 12-20 it is said that these ages make up 11% of alcoholic drinks consumed in America were by this age group (Alcohol.org, 2019).

When underage children start drinking it hinders their brain from growing at a normal rate and slows it down. It is also known that teenagers who use alcohol have a harder time in school and it is hard for them to learn. Another effect of using alcohol at such a young age is growing up later in life and developing an alcohol disorder. Teenagers who use alcohol also encounter more issues legally and are more vulnerable to sexual assault and physical assault. It is important to teach your son the dangers of alcohol and when he goes out it is advised to warn him about peer pressure and how to handle it.

Alcohol is addictive and there are signs you can look out for if your son is abusing alcohol. These signs include genetics which can take the form of a family history of alcohol abuse and what the teenager sees from within the family. When a child sees family members drinking on a regular basis and when their parents allow them only a sip when they are older it teaches them that it is okay to do it because they see it as a normal thing to do. Other signs include a decline on personal health and hygiene. If you notice your son having low energy when he shouldn’t be and a change in his friend group those are also signs that he abuses alcohol.

There are many ways that you can help your son over come the substance abuse he is going through. As a parent the first act of help your son has is you and you can help him by setting an example by not using these substances and not overly drinking or drinking in his presence at all. There are rehabilitation centers that can help your son in any ways that he needs. There are many different treatments like therapy and support groups. These rehabilitation centers can create ways of help that helps your son the best and attend to his personal needs that will be the most affective. Another way to help your son is watching the people he hangs around and making sure that his group is not a bad influence on him. Also, by teaching him the dangers of the substance abuse he is doing and how it can affect his life in the future can also help. I hope that all the information that I have provided will help you and your son.