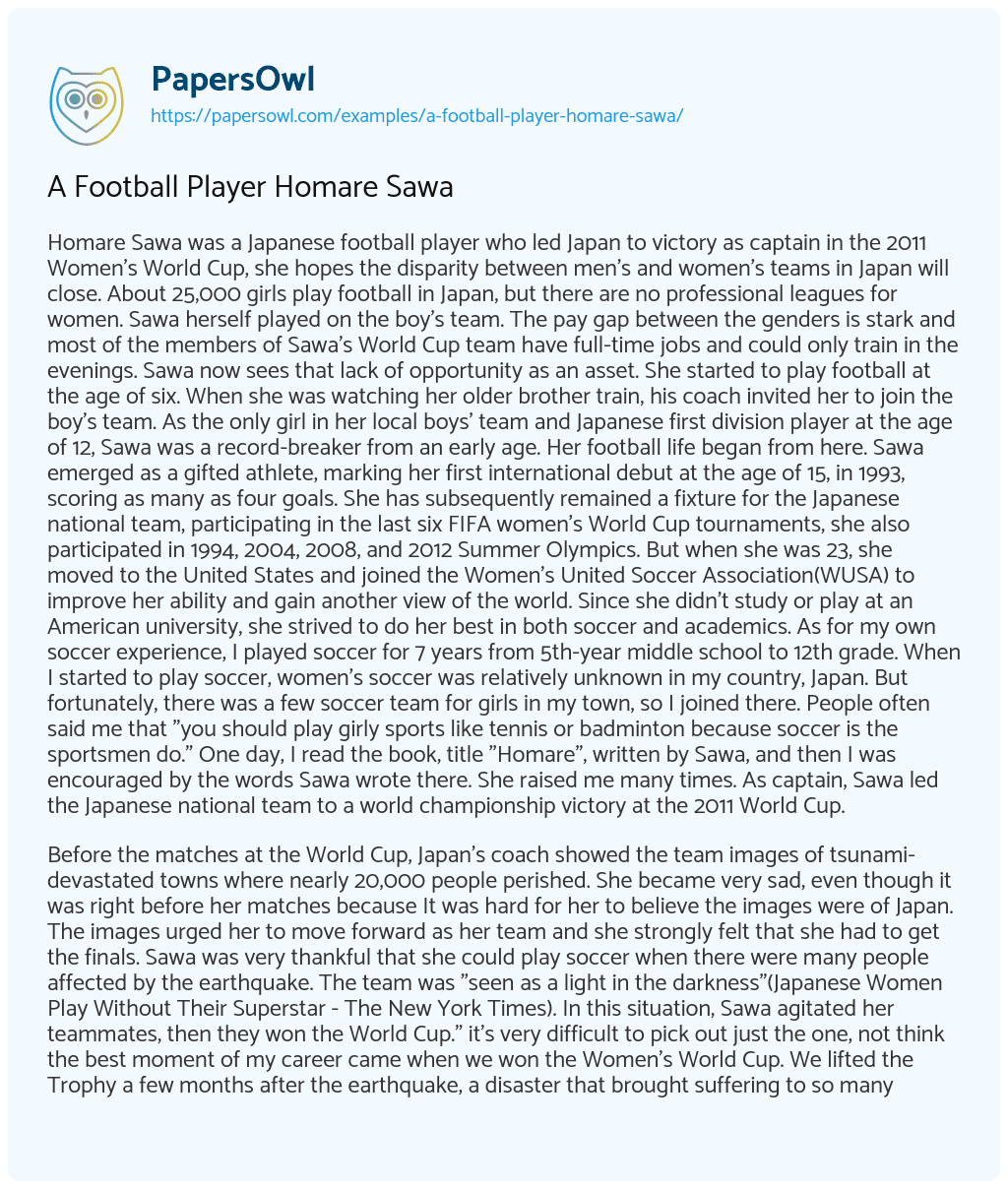 Homare Sawa was a Japanese football player who led Japan to victory as captain in the 2011 Women’s World Cup, she hopes the disparity between men’s and women’s teams in Japan will close. About 25,000 girls play football in Japan, but there are no professional leagues for women. Sawa herself played on the boy’s team. The pay gap between the genders is stark and most of the members of Sawa’s World Cup team have full-time jobs and could only train in the evenings. Sawa now sees that lack of opportunity as an asset. She started to play football at the age of six. When she was watching her older brother train, his coach invited her to join the boy’s team. As the only girl in her local boys’ team and Japanese first division player at the age of 12, Sawa was a record-breaker from an early age. Her football life began from here. Sawa emerged as a gifted athlete, marking her first international debut at the age of 15, in 1993, scoring as many as four goals. She has subsequently remained a fixture for the Japanese national team, participating in the last six FIFA women’s World Cup tournaments, she also participated in 1994, 2004, 2008, and 2012 Summer Olympics. But when she was 23, she moved to the United States and joined the Women’s United Soccer Association(WUSA) to improve her ability and gain another view of the world. Since she didn’t study or play at an American university, she strived to do her best in both soccer and academics. As for my own soccer experience, I played soccer for 7 years from 5th-year middle school to 12th grade. When I started to play soccer, women’s soccer was relatively unknown in my country, Japan. But fortunately, there was a few soccer team for girls in my town, so I joined there. People often said me that “you should play girly sports like tennis or badminton because soccer is the sportsmen do.” One day, I read the book, title “Homare”, written by Sawa, and then I was encouraged by the words Sawa wrote there. She raised me many times. As captain, Sawa led the Japanese national team to a world championship victory at the 2011 World Cup.

Before the matches at the World Cup, Japan’s coach showed the team images of tsunami-devastated towns where nearly 20,000 people perished. She became very sad, even though it was right before her matches because It was hard for her to believe the images were of Japan. The images urged her to move forward as her team and she strongly felt that she had to get the finals. Sawa was very thankful that she could play soccer when there were many people affected by the earthquake. The team was “seen as a light in the darkness”(Japanese Women Play Without Their Superstar – The New York Times). In this situation, Sawa agitated her teammates, then they won the World Cup.” it’s very difficult to pick out just the one, not think the best moment of my career came when we won the Women’s World Cup. We lifted the Trophy a few months after the earthquake, a disaster that brought suffering to so many people. All we did was win a football tournament, but lots of people told us that our victory had given them hope and the courage to keep going. It gave me so much joy to help my compatriots lift themselves.” she said. So when the Japanese talk about “ganbaro”(Japanese for starting firm in the face of unspeakable odds), Sawa’s success is a shining example of how it’s possible. (Homare Sawa: Japan’s soccer star inspires a nation – CNN) The current circumstance of women’s soccer is getting better thanks to Sawa’s championship. Before the 2011 World cup, it was not good. “I’ve been playing football for a long time, but it wasn’t until we won the World Cup that things really changed. All of a sudden our sport was in the spotlight. The media showed more interest than ever.

A few years ago, people were taken aback when they saw a woman playing football, but now you see young girls playing their favorite sport more or less everywhere.” she said. “Japanese women’s football has been through some difficult times and this has come as a real relief. Even so, I still find it all very hard to believe.” On 9 January 2012, Sawa was awarded the FIFA Women’s World Player of the Year in Zurich, Switzerland. There is a famous word that Sawa said to her teammates, “when you have a difficult time, look at my back.” For Sawa, “captain” is just a word. She kept in mind that it was very important to show the way by sincere soccer-playing louder than words. Sawa also showed how to be a leader by working harder than anyone. Sawa retired after helping Japan reach the final of the 2015 Women’s World Cup (where the team lost to the United States), which was the record-tying sixth time she had played in that tournament. She ended her international career with 205 caps and 83 goals, both of which were Japanese records after making her national team debut at the age of 15 while she was still in junior high school. “I haven’t decided what I want to do in the future. Right now, I’m only thankful for all the support I received throughout my career,” she said. (Sawa Homare | Japanese football player | Britannica.com)

After Nadeshiko Japan(Japan women’s national football team) won the 2011 World Cup, I saw a not familiar sight that a young mother and her daughter were kicking a soccer ball in a park. It seemed that they played football for the first time and they didn’t have the experience to learn how to kick the ball. Nevertheless, they looked like they were really enjoying it, and they kicked it for ever. Sawa continued to be the central player in Nadeshiko Japan for a long time, and she won the championship after she became the captain, became the top scorer, and got the MVP. The next year, she was named Women’s World Player of the year, then she got the Olympics medal that she craved. Also, she played 186 games for the Japanese national team and scored 81 goals. No Japanese player has played in that many games or scored that many goals for Japan. In her career, she got a countless number of things she won over.

If there is one thing she achieved, that is she changed the public eye that they would be able to accept that women play football. The parent and child as I mentioned before is the symbol. As long as people don’t fit the opinion of both the girl who wants to play football and the parents who accept her desire, the player population of women’s soccer will not increase. Thinking like that, Sawa was the symbol of women’s soccer for the girl and her family. Sawa continued to be the symbol before she became famous because of the 2011 World Cup. Nahomi Kawasumi and Aya Miyama were chasing Sawa’s back when they were children. They who admired Sawa eventually grow up to be players of world-class, then they became her indispensable teammates for Sawa to be the greatest in the world.

So basically, Sawa had been gathered her future teammates by expressing the fun of football, the attractiveness of football-player from she was a teenager. Unfortunately, the girls who want to be soccer players from now on cannot play the game with Sawa. But Sawa hopes that she can take on a role to expand and popularize Women’s Soccer even though after she is a retired football player. At her retirement press conference, she told her future resolution that “It was not always fun while I was playing soccer. But, I hope that I will be able to let children know about how it is difficult and joyful to work hard towards the same goal with a company while playing together.”

Anatomy and Physiological Aspect of a Football Player