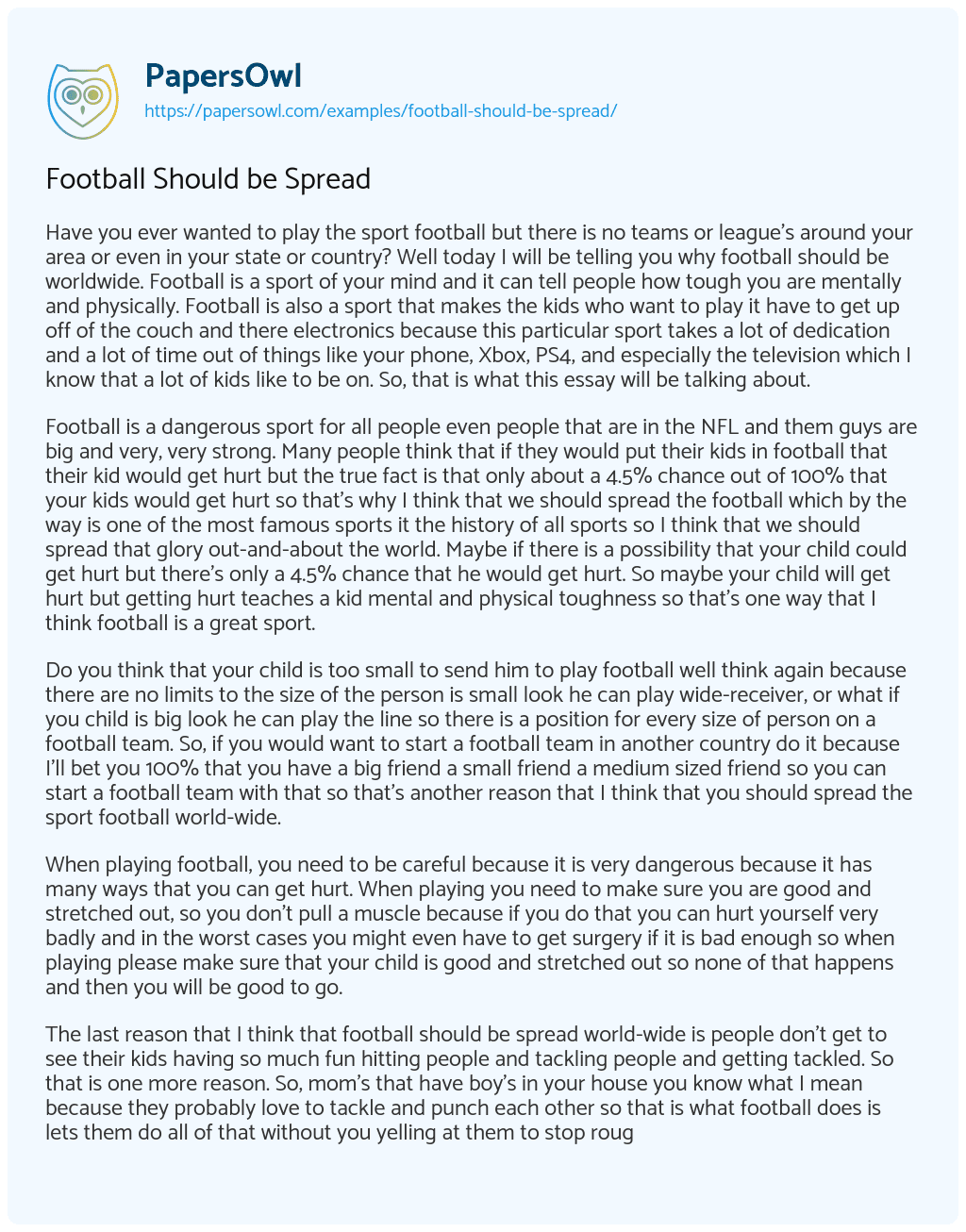 Have you ever wanted to play the sport football but there is no teams or league’s around your area or even in your state or country? Well today I will be telling you why football should be worldwide. Football is a sport of your mind and it can tell people how tough you are mentally and physically. Football is also a sport that makes the kids who want to play it have to get up off of the couch and there electronics because this particular sport takes a lot of dedication and a lot of time out of things like your phone, Xbox, PS4, and especially the television which I know that a lot of kids like to be on. So, that is what this essay will be talking about.

Football is a dangerous sport for all people even people that are in the NFL and them guys are big and very, very strong. Many people think that if they would put their kids in football that their kid would get hurt but the true fact is that only about a 4.5% chance out of 100% that your kids would get hurt so that’s why I think that we should spread the football which by the way is one of the most famous sports it the history of all sports so I think that we should spread that glory out-and-about the world. Maybe if there is a possibility that your child could get hurt but there’s only a 4.5% chance that he would get hurt. So maybe your child will get hurt but getting hurt teaches a kid mental and physical toughness so that’s one way that I think football is a great sport.

Do you think that your child is too small to send him to play football well think again because there are no limits to the size of the person is small look he can play wide-receiver, or what if you child is big look he can play the line so there is a position for every size of person on a football team. So, if you would want to start a football team in another country do it because I’ll bet you 100% that you have a big friend a small friend a medium sized friend so you can start a football team with that so that’s another reason that I think that you should spread the sport football world-wide.

When playing football, you need to be careful because it is very dangerous because it has many ways that you can get hurt. When playing you need to make sure you are good and stretched out, so you don’t pull a muscle because if you do that you can hurt yourself very badly and in the worst cases you might even have to get surgery if it is bad enough so when playing please make sure that your child is good and stretched out so none of that happens and then you will be good to go.

The last reason that I think that football should be spread world-wide is people don’t get to see their kids having so much fun hitting people and tackling people and getting tackled. So that is one more reason. So, mom’s that have boy’s in your house you know what I mean because they probably love to tackle and punch each other so that is what football does is lets them do all of that without you yelling at them to stop roughhousing.

So, there are four reasons that I think that football should be spread around the world. One it is a fun sport, two it can be a sport to get kids off of their electronics, three it is dangerous but fun, and four it is a fun way to hit and not get yelled at by your mom. So, next time you want to put your child in a sport just start by looking for a football league because you never know they might be good at it.

Football Should be Spread. (2019, Apr 05). Retrieved from https://papersowl.com/examples/football-should-be-spread/

Is Tackle Football too Dangerous for Kids to Play?

Should Football be Banned in America?