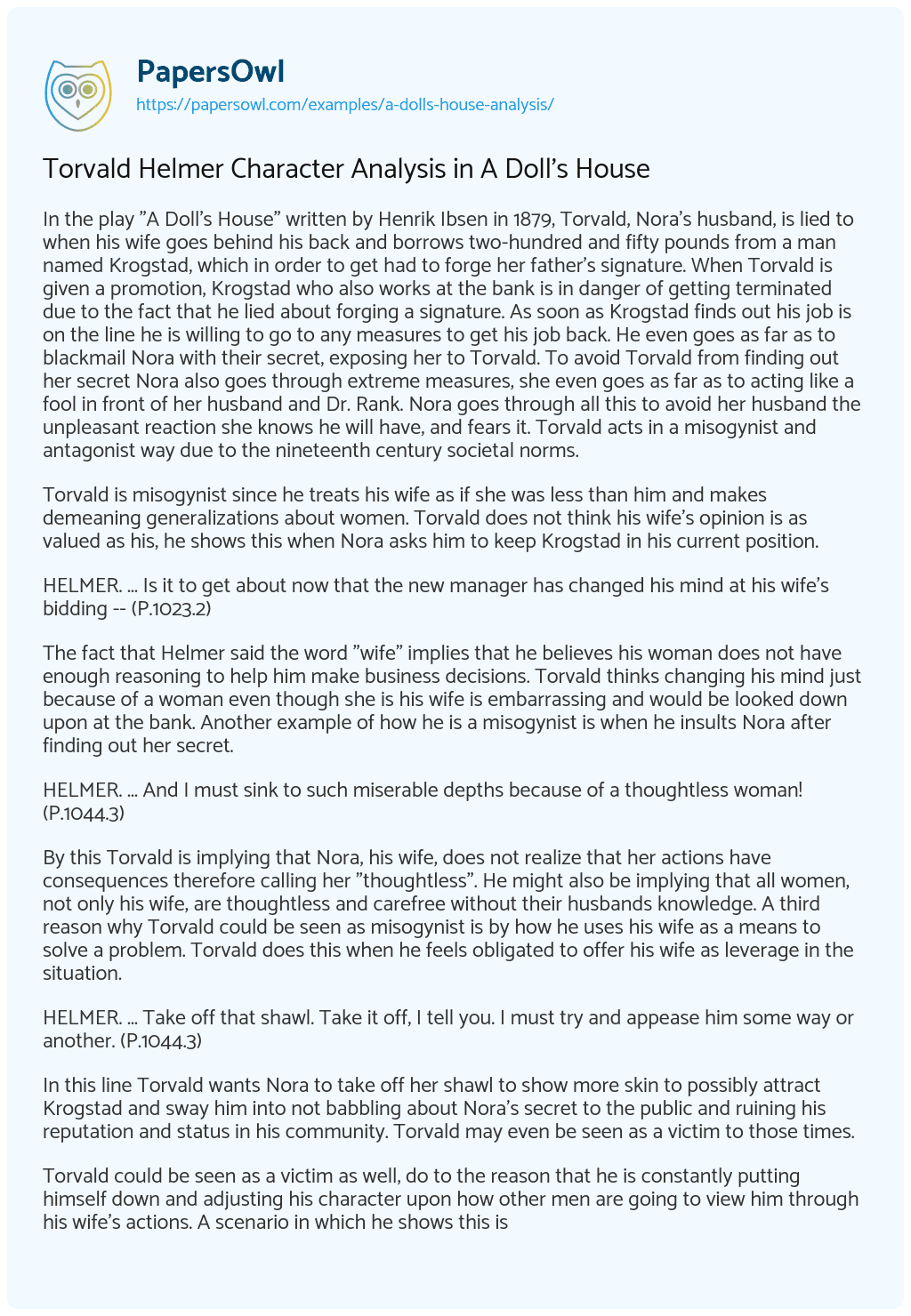 In the play “A Doll’s House” written by Henrik Ibsen in 1879, Torvald, Nora’s husband, is lied to when his wife goes behind his back and borrows two-hundred and fifty pounds from a man named Krogstad, which in order to get had to forge her father’s signature. When Torvald is given a promotion, Krogstad who also works at the bank is in danger of getting terminated due to the fact that he lied about forging a signature. As soon as Krogstad finds out his job is on the line he is willing to go to any measures to get his job back. He even goes as far as to blackmail Nora with their secret, exposing her to Torvald. To avoid Torvald from finding out her secret Nora also goes through extreme measures, she even goes as far as to acting like a fool in front of her husband and Dr. Rank. Nora goes through all this to avoid her husband the unpleasant reaction she knows he will have, and fears it. Torvald acts in a misogynist and antagonist way due to the nineteenth century societal norms.

Torvald is misogynist since he treats his wife as if she was less than him and makes demeaning generalizations about women. Torvald does not think his wife’s opinion is as valued as his, he shows this when Nora asks him to keep Krogstad in his current position.

The fact that Helmer said the word “wife” implies that he believes his woman does not have enough reasoning to help him make business decisions. Torvald thinks changing his mind just because of a woman even though she is his wife is embarrassing and would be looked down upon at the bank. Another example of how he is a misogynist is when he insults Nora after finding out her secret.

HELMER. … And I must sink to such miserable depths because of a thoughtless woman! (P.1044.3)

By this Torvald is implying that Nora, his wife, does not realize that her actions have consequences therefore calling her “thoughtless”. He might also be implying that all women, not only his wife, are thoughtless and carefree without their husbands knowledge. A third reason why Torvald could be seen as misogynist is by how he uses his wife as a means to solve a problem. Torvald does this when he feels obligated to offer his wife as leverage in the situation.

In this line Torvald wants Nora to take off her shawl to show more skin to possibly attract Krogstad and sway him into not babbling about Nora’s secret to the public and ruining his reputation and status in his community. Torvald may even be seen as a victim to those times.

Torvald could be seen as a victim as well, do to the reason that he is constantly putting himself down and adjusting his character upon how other men are going to view him through his wife’s actions. A scenario in which he shows this is when Torvald finds out about Nora’s lie and Krogstad’s blackmail.

HELMER. … I am in the power of an unscrupulous man; he can do what he likes with me, ask anything he likes of me, give me any order he pleases — I dare not refuse. (P.1044.3)

Torvald figuratively drops down on his knees for this man and is willing to do anything to please him in order for Krogstad not to go public with the information he knows. Another instance in where Torvald could be seen as a victim and at the same time hypocritical is right after opening Krogstad’s second letter. Krogstad’s second letter, which returned Nora’s bond as well as an apology letter for the blackmail, as soon as Torvald read it his mood changed instantly and forgave nora realizing she did the whole thing out of love for him.

Torvald could be seen as a victim here do to the reason that he didn’t realize or acknowledge his wife’s love until after the fact that he realized he was safe from society’s claws. A final scenario in which Torvald could possibly be seen as the victim is when he believes he will be the one to blame for his wife’s actions.

HELMER. … He can make the affair known everywhere; and if he does, I may be falsely suspected of having been a party to your criminal action. Very likely people will think I was behind it all — that it was I who prompted you! (P.1044.3)

Which at the time wouldn’t have been unlikely do to the fact that women didn’t normally disobey or go behind their husband’s back to get a loan, therefore making him a victim of his wife’s actions. Not only is Torvald a victim but he might even play a part in being an antagonist.

Torvald is an antagonist because he is against Nora doing anything she wants to do as well as goes against her wishes. An example of when he opposes Nora’s desires is when he constantly puts her down for spending money although they are in a good position now to use it.

HELMER. … Bought, did you say? All these things? Has my little spendthrift been wasting money again? (P.997.1)

One can imply that Torvald is against Nora spending money when he calls her a “”spendthrift””. He opposes Nora’s decision even though she spends the money on gifts for her family. Torvald again opposes Nora when he assumes she has eaten macaroons.

Torvald is constantly going against Nora even if it is as simple as eating a dessert. Both of those scenarios show antagonist properties.

Torvald is a misogynistic and antagonist character who suffers from nineteenth century society norms in Ibsen’s “”A Doll’s House””. His misogyny shows as he constantly insults his wife for just being a woman and frequently makes comments implying women are lesser than men.

As a victim of nineteenth century societal norms he has ideas of what a man should be and how he should act. He suffers from this throughout the play when he is constantly worrying about his pride and status in society instead of the love and affection of his wife and kids. Torvald is constantly opposed to his wife and her decisions, showing he is one of the antagonists in the play. Torvald is not only a misogynist and an antagonist but is also a victim of nineteenth century society norms.