A Common Idea: the Future 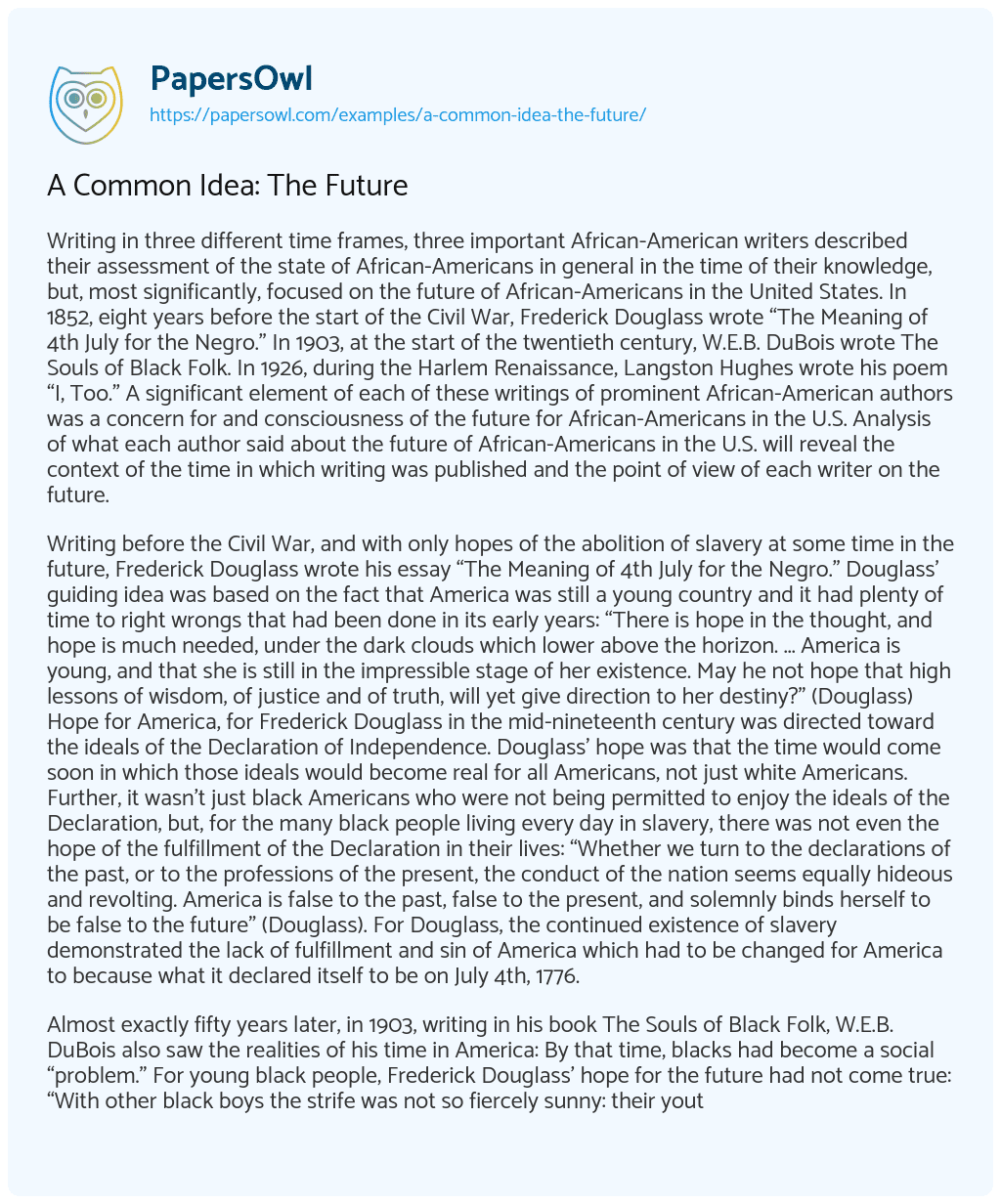 Writing before the Civil War, and with only hopes of the abolition of slavery at some time in the future, Frederick Douglass wrote his essay “The Meaning of 4th July for the Negro.” Douglass’ guiding idea was based on the fact that America was still a young country and it had plenty of time to right wrongs that had been done in its early years: “There is hope in the thought, and hope is much needed, under the dark clouds which lower above the horizon. … America is young, and that she is still in the impressible stage of her existence. May he not hope that high lessons of wisdom, of justice and of truth, will yet give direction to her destiny?” (Douglass) Hope for America, for Frederick Douglass in the mid-nineteenth century was directed toward the ideals of the Declaration of Independence. Douglass’ hope was that the time would come soon in which those ideals would become real for all Americans, not just white Americans. Further, it wasn’t just black Americans who were not being permitted to enjoy the ideals of the Declaration, but, for the many black people living every day in slavery, there was not even the hope of the fulfillment of the Declaration in their lives: “Whether we turn to the declarations of the past, or to the professions of the present, the conduct of the nation seems equally hideous and revolting. America is false to the past, false to the present, and solemnly binds herself to be false to the future” (Douglass). For Douglass, the continued existence of slavery demonstrated the lack of fulfillment and sin of America which had to be changed for America to because what it declared itself to be on July 4th, 1776.

Almost exactly fifty years later, in 1903, writing in his book The Souls of Black Folk, W.E.B. DuBois also saw the realities of his time in America: By that time, blacks had become a social “problem.” For young black people, Frederick Douglass’ hope for the future had not come true: “With other black boys the strife was not so fiercely sunny: their youth shrunk into tasteless sycophancy, or into silent hatred of the pale world about them and mocking distrust of everything white; or wasted itself in a bitter cry, Why did God make me an outcast and a stranger in mine own house?” (DuBois). The hopes for significant progress for black people after the end of the Civil War had lasted only about twenty years, but then new laws were enacted by white people to restrict the further progress of black people, most significantly affecting their right to vote and have their votes counted. “A million black men started with renewed zeal to vote themselves into the kingdom. So, the decade flew away, the revolution of 1876 came, and left the half-free serf weary, wondering, but still inspired” (DuBois).

DuBois saw the black people weary of their seemingly hopeless struggle for equal rights with white people, their hopes for a positive future vanished into a meaningless and restricted present. While the white culture assured black people of the rightness of their positions in serving and cooking jobs, but not sharing in the rights and wealth of the country, DuBois saw the future of African-Americans lying within themselves, in the recognition of their own beauty, power, and capabilities: “,,,the ideal of human brotherhood, gained through the unifying ideal of Race; the ideal of fostering and developing the traits and talents of the Negro, not in opposition to or contempt for other races, but rather in large conformity to the greater ideals of the American Republic” (DuBois). As such, for the future, for W.E.B. DuBois, the Africans have a rich heritage to contribute to the American culture in the fulfillment of the Declaration of Independence.

Writing twenty-three years later, in the Harlem Renaissance, a time of cultural advancement for African-Americans, Langston Hughes wrote in full realization of the fact that America still had not reached the fulfillment of the ideals for the future hoped for by Frederick Douglass and W.E.B. DuBois. His poem, “I, Too” in brief poetic format repeated, in essence, the ideals and hopes for the future of Frederick Douglas and W.E.B. DuBois, but expressing disillusionment at their realities of Langston Hughes’ time for African-Americans: “I am the darker brother. They send me to eat in the kitchen When company comes…” (Hughes), Still cooking and serving, as DuBois described African-Americans of his time, in the mid-1920s as Langston Hughes saw it, little had changed.

A Common Idea: The Future. (2021, Mar 09). Retrieved from https://papersowl.com/examples/a-common-idea-the-future/

Black People had no Freedom