A Case of Jake’s Anxiety 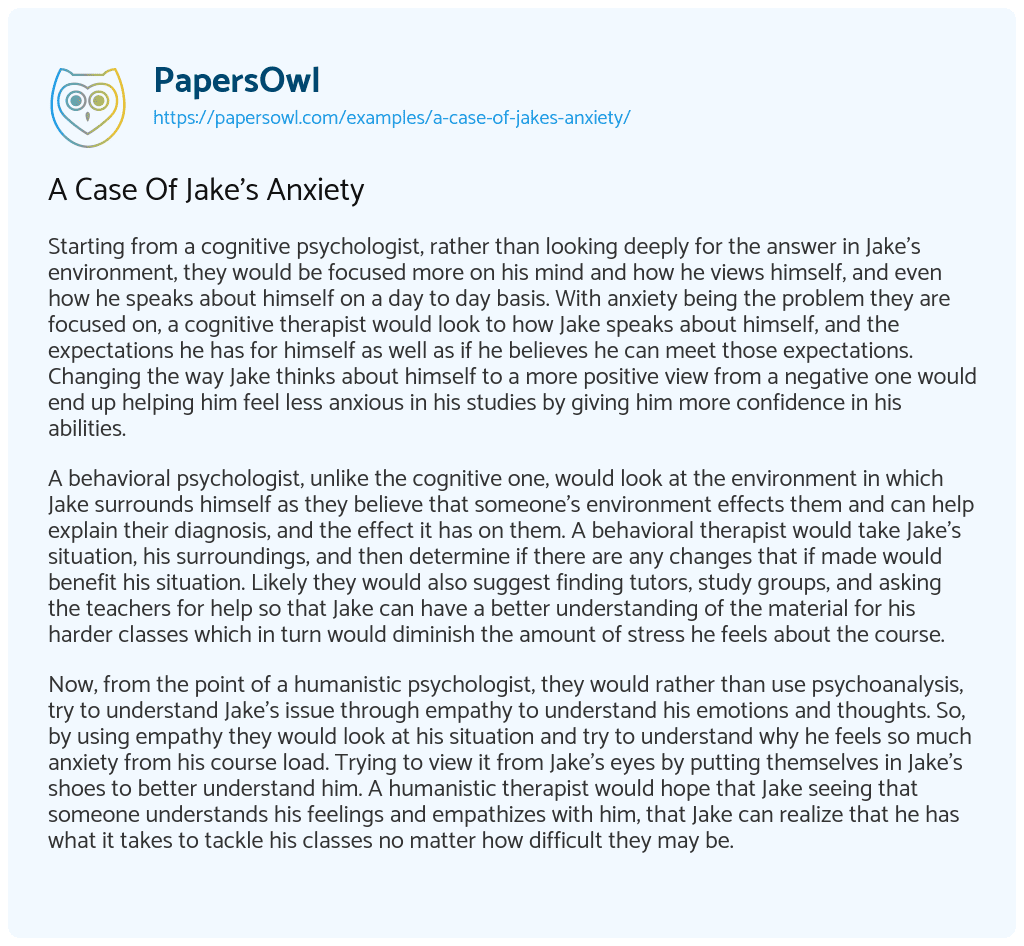 Starting from a cognitive psychologist, rather than looking deeply for the answer in Jake’s environment, they would be focused more on his mind and how he views himself, and even how he speaks about himself on a day to day basis. With anxiety being the problem they are focused on, a cognitive therapist would look to how Jake speaks about himself, and the expectations he has for himself as well as if he believes he can meet those expectations. Changing the way Jake thinks about himself to a more positive view from a negative one would end up helping him feel less anxious in his studies by giving him more confidence in his abilities.

A behavioral psychologist, unlike the cognitive one, would look at the environment in which Jake surrounds himself as they believe that someone’s environment effects them and can help explain their diagnosis, and the effect it has on them. A behavioral therapist would take Jake’s situation, his surroundings, and then determine if there are any changes that if made would benefit his situation. Likely they would also suggest finding tutors, study groups, and asking the teachers for help so that Jake can have a better understanding of the material for his harder classes which in turn would diminish the amount of stress he feels about the course.

Now, from the point of a humanistic psychologist, they would rather than use psychoanalysis, try to understand Jake’s issue through empathy to understand his emotions and thoughts. So, by using empathy they would look at his situation and try to understand why he feels so much anxiety from his course load. Trying to view it from Jake’s eyes by putting themselves in Jake’s shoes to better understand him. A humanistic therapist would hope that Jake seeing that someone understands his feelings and empathizes with him, that Jake can realize that he has what it takes to tackle his classes no matter how difficult they may be.

A Case Of Jake's Anxiety. (2020, Mar 05). Retrieved from https://papersowl.com/examples/a-case-of-jakes-anxiety/

A Type of Anxiety Disorder – Phobia