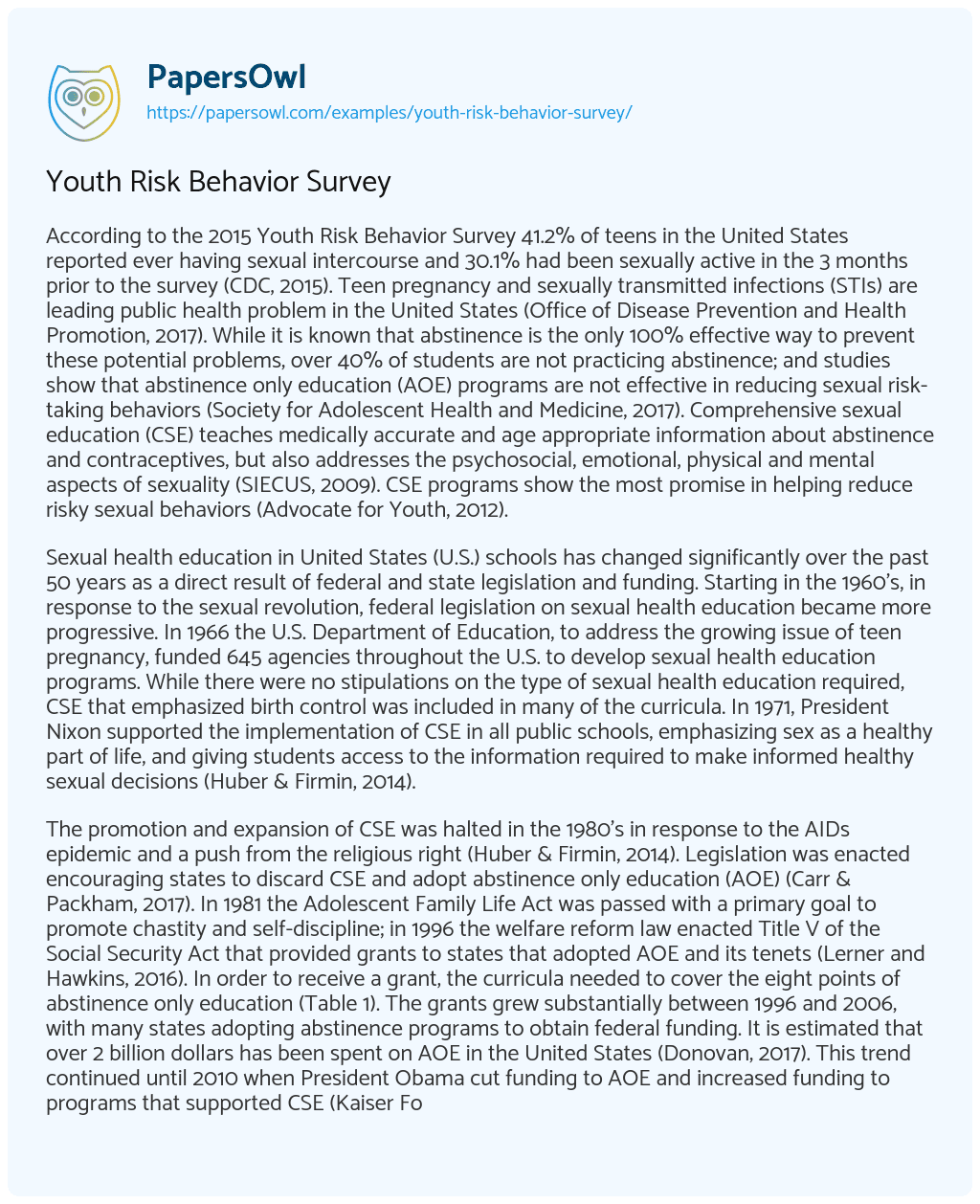 According to the 2015 Youth Risk Behavior Survey 41.2% of teens in the United States reported ever having sexual intercourse and 30.1% had been sexually active in the 3 months prior to the survey (CDC, 2015). Teen pregnancy and sexually transmitted infections (STIs) are leading public health problem in the United States (Office of Disease Prevention and Health Promotion, 2017). While it is known that abstinence is the only 100% effective way to prevent these potential problems, over 40% of students are not practicing abstinence; and studies show that abstinence only education (AOE) programs are not effective in reducing sexual risk-taking behaviors (Society for Adolescent Health and Medicine, 2017). Comprehensive sexual education (CSE) teaches medically accurate and age appropriate information about abstinence and contraceptives, but also addresses the psychosocial, emotional, physical and mental aspects of sexuality (SIECUS, 2009). CSE programs show the most promise in helping reduce risky sexual behaviors (Advocate for Youth, 2012).

Sexual health education in United States (U.S.) schools has changed significantly over the past 50 years as a direct result of federal and state legislation and funding. Starting in the 1960’s, in response to the sexual revolution, federal legislation on sexual health education became more progressive. In 1966 the U.S. Department of Education, to address the growing issue of teen pregnancy, funded 645 agencies throughout the U.S. to develop sexual health education programs. While there were no stipulations on the type of sexual health education required, CSE that emphasized birth control was included in many of the curricula. In 1971, President Nixon supported the implementation of CSE in all public schools, emphasizing sex as a healthy part of life, and giving students access to the information required to make informed healthy sexual decisions (Huber & Firmin, 2014).

The promotion and expansion of CSE was halted in the 1980’s in response to the AIDs epidemic and a push from the religious right (Huber & Firmin, 2014). Legislation was enacted encouraging states to discard CSE and adopt abstinence only education (AOE) (Carr & Packham, 2017). In 1981 the Adolescent Family Life Act was passed with a primary goal to promote chastity and self-discipline; in 1996 the welfare reform law enacted Title V of the Social Security Act that provided grants to states that adopted AOE and its tenets (Lerner and Hawkins, 2016). In order to receive a grant, the curricula needed to cover the eight points of abstinence only education (Table 1). The grants grew substantially between 1996 and 2006, with many states adopting abstinence programs to obtain federal funding. It is estimated that over 2 billion dollars has been spent on AOE in the United States (Donovan, 2017). This trend continued until 2010 when President Obama cut funding to AOE and increased funding to programs that supported CSE (Kaiser Foundation, 2002, Weiser & Miller, 2010). According to Lerner and Hawkins (2016), there are still more federal funding opportunities available to AOE programming than to CSE.

Sec. 501(b) of the Social Security Act 8 points that define “abstinence education”

While the United States government was promoting AOE in schools, leading health and educational organizations were taking a stance for CSE (WHO, 1993). The United Nations Educational, Scientific and Cultural Organization (UNESCO) and the World Health Organization (WHO) view CSE as a human right, with the objective to provide accurate, realistic information and life skills in a nonjudgmental way to help adolescents make informed decisions. Information should be free of stigma and reviewed regularly for inaccuracies (UNESCO, 2015, WHO, 2010). The CDC (2014), recommends comprehensive education delivered by trained instructors that provide information on the benefits of abstinence, but also discusses 16 critical sexual health topics including communication, HIV and STI transmission risks, contraceptives, decision making skills, and the efficacy of condoms (Table 2). The Society for Adolescent Health and Medicine (SAHM) (2017), released a position paper addressing the problems with AOE, recommending it be abandoned due to the lack of evidence of efficacy. Failures identified by SAHM: not meeting the needs of youth in sexual minority, being in violation of the sexual and reproductive rights of youth, and the negative impact of the programs misinformation. The purpose of this review is to examine why U.S. government officials are promoting AOE when leading health and educational organizations are promoting CSE.

Importance of Sex Education in America

Teen Pregnancy in the United States