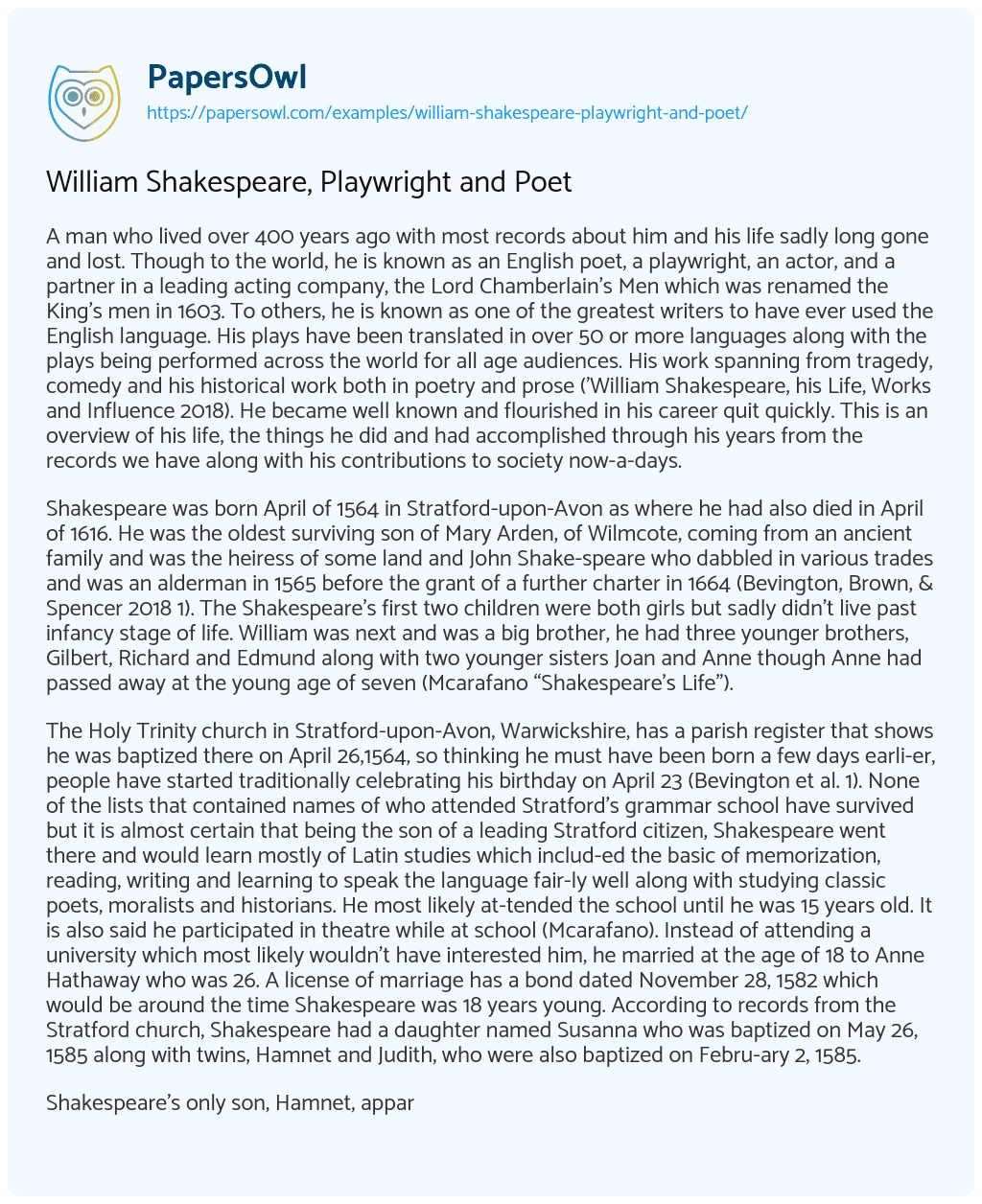 A man who lived over 400 years ago with most records about him and his life sadly long gone and lost. Though to the world, he is known as an English poet, a playwright, an actor, and a partner in a leading acting company, the Lord Chamberlain’s Men which was renamed the King’s men in 1603. To others, he is known as one of the greatest writers to have ever used the English language. His plays have been translated in over 50 or more languages along with the plays being performed across the world for all age audiences. His work spanning from tragedy, comedy and his historical work both in poetry and prose (‘William Shakespeare, his Life, Works and Influence 2018). He became well known and flourished in his career quit quickly. This is an overview of his life, the things he did and had accomplished through his years from the records we have along with his contributions to society now-a-days.

Shakespeare was born April of 1564 in Stratford-upon-Avon as where he had also died in April of 1616. He was the oldest surviving son of Mary Arden, of Wilmcote, coming from an ancient family and was the heiress of some land and John Shake-speare who dabbled in various trades and was an alderman in 1565 before the grant of a further charter in 1664 (Bevington, Brown, & Spencer 2018 1). The Shakespeare’s first two children were both girls but sadly didn’t live past infancy stage of life. William was next and was a big brother, he had three younger brothers, Gilbert, Richard and Edmund along with two younger sisters Joan and Anne though Anne had passed away at the young age of seven (Mcarafano “Shakespeare’s Life”).

The Holy Trinity church in Stratford-upon-Avon, Warwickshire, has a parish register that shows he was baptized there on April 26,1564, so thinking he must have been born a few days earli-er, people have started traditionally celebrating his birthday on April 23 (Bevington et al. 1). None of the lists that contained names of who attended Stratford’s grammar school have survived but it is almost certain that being the son of a leading Stratford citizen, Shakespeare went there and would learn mostly of Latin studies which includ-ed the basic of memorization, reading, writing and learning to speak the language fair-ly well along with studying classic poets, moralists and historians. He most likely at-tended the school until he was 15 years old. It is also said he participated in theatre while at school (Mcarafano). Instead of attending a university which most likely wouldn’t have interested him, he married at the age of 18 to Anne Hathaway who was 26. A license of marriage has a bond dated November 28, 1582 which would be around the time Shakespeare was 18 years young. According to records from the Stratford church, Shakespeare had a daughter named Susanna who was baptized on May 26, 1585 along with twins, Hamnet and Judith, who were also baptized on Febru-ary 2, 1585.

Shakespeare’s only son, Hamnet, apparently died in 1596 at the age of 11. The next eight years of Shakespeare’s life are not known due to no records until his name. Nothing known about how he earned a living, when he moved from Stratford or how he got his start in theatre until his name however begins to appear in London theatre records (Mcarafano). Stories go that he gained entry to the world of theatre by minding the horses of theatergoers.

Shakespeare is first mentioned in the Literacy world of London around 1592 as an established London actor and playwright when a book with Robert Greene’s writing was published after his death which inside had a phrase that insulted Shakespeare (Bevington, Brown & Spencer 2018 2). This must have been around when one of Shakespeare’s earliest history plays, Henry VI, Part 3 must have already been performed. A mutual acquaintance of Greene had wrote a preface offering an apology to Shakespeare and talks about his worth which indicates at that time, Shakespeare was making important friends. Evidence that Shake-speare began to prosper around this time was the fact that rough drafts in 1596 grant-ing a coat of arms to John Shakespeare which William almost certainly took it upon himself and paid the fees (2). More defining evidence that Shakespeare’s success was growing is that he invested much of his wealth in real-estate purchases in Stratford and he purchased the second-largest house in town, New place, in 1597 (Mcarafano). His career in theatre and how it began isn’t really known. According to most records know to date, they only give an estimate to the time he began his works with theatre. From roughly 1594 onward he was an important member of the Lord Chamber-lain’s company of player. They had the best actor, Richard Burbage; they had the best theatre, the Globe. . . they had the best dramatist, Shakespeare. It is no wonder that the company prospered. Shakespeare became a full-time professional man of his own theatre.

Unfortunately, written records give little indication of the way in which Shakespeare’s professional life molded his mar-velous artistry. All that can be deduced is that for 20 years Shakespeare devot-ed himself assiduously to his art, writing more than a million words of poetic drama of the highest quality that captured the complete range of human emo-tion and conflict. (Brevington et al. 2). It is known that as he began to retire around 1611 in Stratford, he had written his last few plays of the 37 that would be found and claimed as his work. Among the last plays that Shakespeare worked on was The Two Noble Kinsmen, which he wrote with a frequent collaborator, John Fletcher, most likely in 1613. (Mcarafano) He died on April 23, 1616—the traditional date of his birthday, though his precise birthdate is unknown.

Some speculate it was April 25,1616 that he was buried due to records at Trinity Church. No one knows the cause of his death. His brother-in-law had died a week earlier, which could imply infectious disease, but Shakespeare’s health may have had a longer decline. (Mcarafano) Seven years later after the death of Shakespeare, John Heminge and Henry Condell (two actors from The King’s Company) had Shakespeare’s plays published by William Jaggard and his son, Isaac. This first folio contained 37 plays and sold for £1. (Royal Shakespeare Company 2018). Through all of the slivers of records that we have about Shakespeare, historians have made a brief timeline of William Shake-speare’s life with the materials they have come across. Since there isn’t many records about him and his life, there has been a recent toss up as to if William Shakespeare actually wrote all of the work that is claimed to be his since its known that he wasn’t that illiterate and there isn’t much proof to show that he learned more than the basics of writing and reading.

People wonder how he came to write such plays and poems describing different lifestyles that him and his lower social class life really wouldn’t know about. From theories of people saying others had helped him write things to someone just letting him take credit for their work, all of this is still a mystery to this day and Shakespeare is known as a mysterious yet genius writer. Though we may never know the full truth about how much of his work was actually his or if he had help writing them from others, he still inspires many of today’s generations to become a flourishing English writer like the great William Shakespeare he is. To his plays being performed all around the world to this day along with his work still being read and taught in Eng-lish class, he is a historical person with great success that will be discussed for many years to come