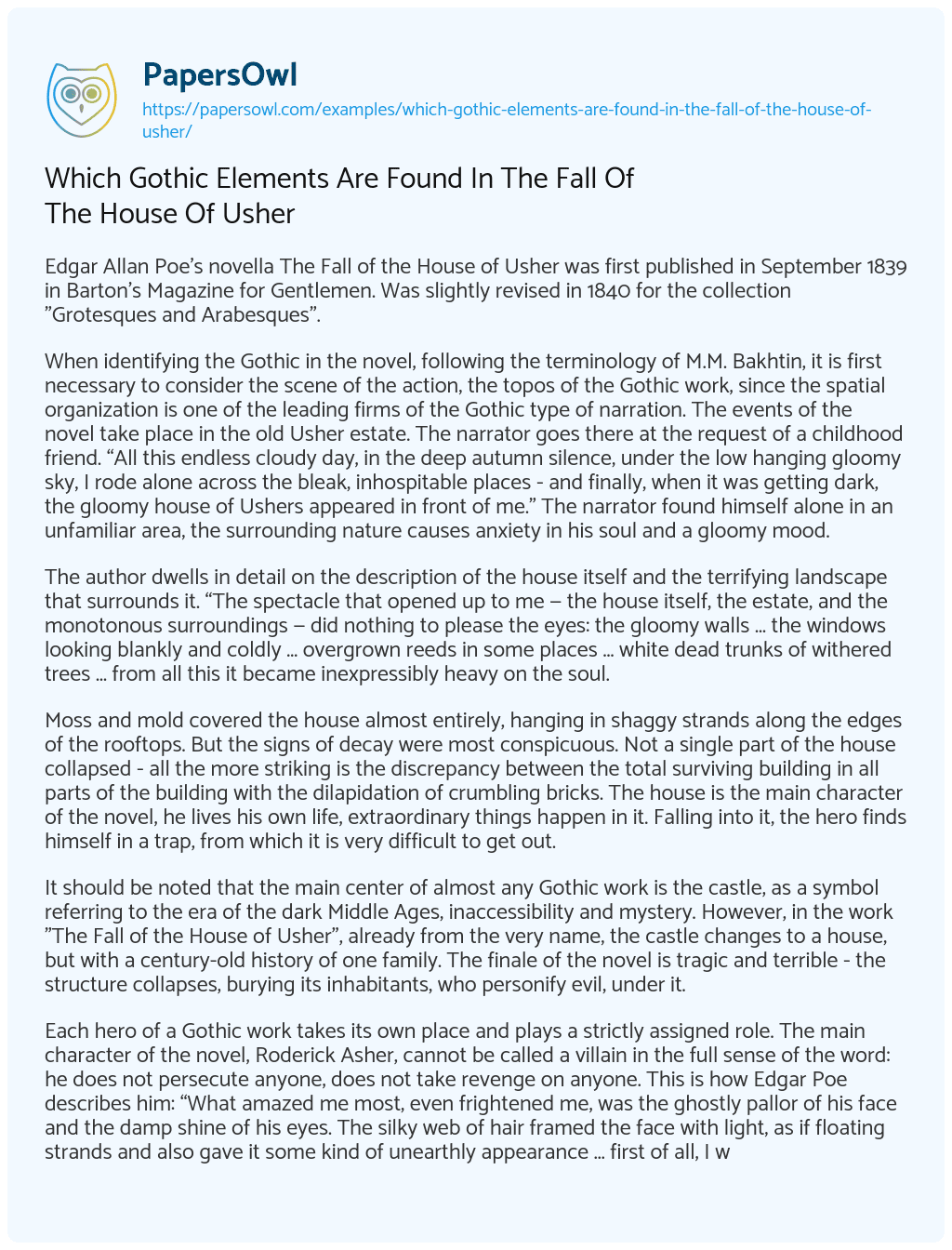 Edgar Allan Poe’s novella The Fall of the House of Usher was first published in September 1839 in Barton’s Magazine for Gentlemen. Was slightly revised in 1840 for the collection “Grotesques and Arabesques”.

When identifying the Gothic in the novel, following the terminology of M.M. Bakhtin, it is first necessary to consider the scene of the action, the topos of the Gothic work, since the spatial organization is one of the leading firms of the Gothic type of narration. The events of the novel take place in the old Usher estate. The narrator goes there at the request of a childhood friend. “All this endless cloudy day, in the deep autumn silence, under the low hanging gloomy sky, I rode alone across the bleak, inhospitable places – and finally, when it was getting dark, the gloomy house of Ushers appeared in front of me.” The narrator found himself alone in an unfamiliar area, the surrounding nature causes anxiety in his soul and a gloomy mood.

The author dwells in detail on the description of the house itself and the terrifying landscape that surrounds it. “The spectacle that opened up to me — the house itself, the estate, and the monotonous surroundings — did nothing to please the eyes: the gloomy walls … the windows looking blankly and coldly … overgrown reeds in some places … white dead trunks of withered trees … from all this it became inexpressibly heavy on the soul.

Moss and mold covered the house almost entirely, hanging in shaggy strands along the edges of the rooftops. But the signs of decay were most conspicuous. Not a single part of the house collapsed – all the more striking is the discrepancy between the total surviving building in all parts of the building with the dilapidation of crumbling bricks. The house is the main character of the novel, he lives his own life, extraordinary things happen in it. Falling into it, the hero finds himself in a trap, from which it is very difficult to get out.

It should be noted that the main center of almost any Gothic work is the castle, as a symbol referring to the era of the dark Middle Ages, inaccessibility and mystery. However, in the work “The Fall of the House of Usher”, already from the very name, the castle changes to a house, but with a century-old history of one family. The finale of the novel is tragic and terrible – the structure collapses, burying its inhabitants, who personify evil, under it.

Each hero of a Gothic work takes its own place and plays a strictly assigned role. The main character of the novel, Roderick Asher, cannot be called a villain in the full sense of the word: he does not persecute anyone, does not take revenge on anyone. This is how Edgar Poe describes him: “What amazed me most, even frightened me, was the ghostly pallor of his face and the damp shine of his eyes. The silky web of hair framed the face with light, as if floating strands and also gave it some kind of unearthly appearance … first of all, I was struck by some kind of convulsion, impetuosity. ” But through the fault of Roderick Asher, his sister, buried alive, dies in the family crypt in terrible agony. Feelings of guilt drive Roderick crazy, transforming into frightening visions, a sense of imminent end. The hero, the narrator, a friend of Roderick, is trying with all his might to resist him, trying to help get rid of heavy thoughts and phantasmagorias caused by the terrible act, but in the end he himself falls under the influence of the madman, and, unable to withstand all the horrors, runs from the terrible house.

It should be noted that the general emotional and aesthetic effect produced on the reader by the novel “The Fall of the House of Usher” is achieved both through a reliable description of the feelings and emotions of the heroes, and through a convincing image of obviously incredible, fantastic events and phenomena. Yu. V. Kovalev wrote that “Edgar Poe fought for the absolute trust of the reader and in his own work developed a whole system of techniques and methods that contributed to the achievement of the effect of reliability.”

This feature was also characterized by the Russian writer FM Dostoevsky: “In Edgar Poe there is precisely one feature that distinguishes him decisively from all other writers and constitutes a sharp feature of his: it is the power of imagination … There is such a feature in his imagination ability that we will not meet with anyone: this is the power of details … In Po’s stories you see so clearly all the details of the image or event presented to you that, finally, as if you are convinced of its possibility. “

Which Gothic Elements Are Found In The Fall Of The House Of Usher. (2021, Jun 30). Retrieved from https://papersowl.com/examples/which-gothic-elements-are-found-in-the-fall-of-the-house-of-usher/

Romantic and Gothic Elements in House of Usher

Gothic Elements in the Tell Tale Heart and other Novels