Virtual Reality: the Future is here 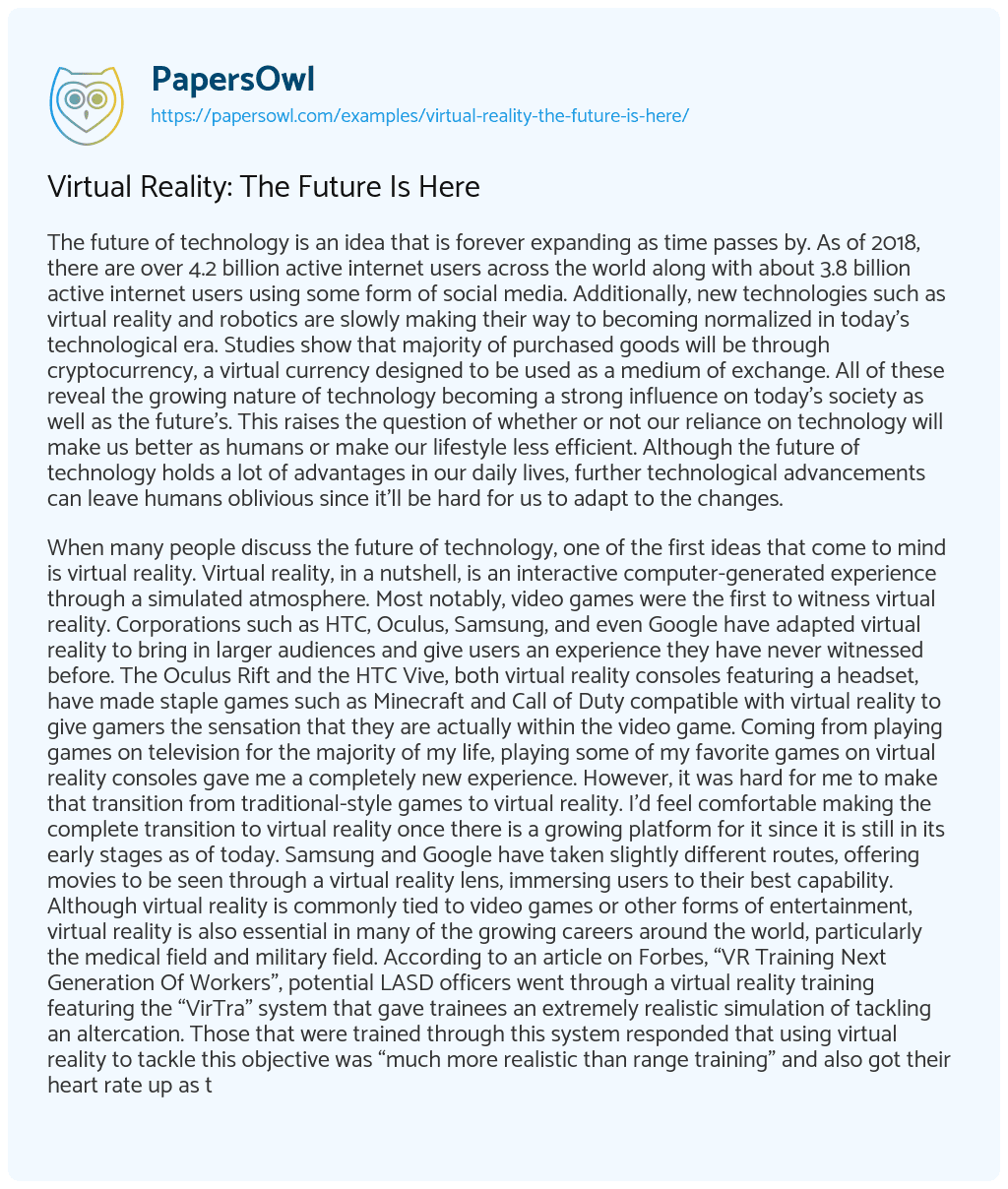 The future of technology is an idea that is forever expanding as time passes by. As of 2018, there are over 4.2 billion active internet users across the world along with about 3.8 billion active internet users using some form of social media. Additionally, new technologies such as virtual reality and robotics are slowly making their way to becoming normalized in today’s technological era. Studies show that majority of purchased goods will be through cryptocurrency, a virtual currency designed to be used as a medium of exchange. All of these reveal the growing nature of technology becoming a strong influence on today’s society as well as the future’s. This raises the question of whether or not our reliance on technology will make us better as humans or make our lifestyle less efficient. Although the future of technology holds a lot of advantages in our daily lives, further technological advancements can leave humans oblivious since it’ll be hard for us to adapt to the changes.

When many people discuss the future of technology, one of the first ideas that come to mind is virtual reality. Virtual reality, in a nutshell, is an interactive computer-generated experience through a simulated atmosphere. Most notably, video games were the first to witness virtual reality. Corporations such as HTC, Oculus, Samsung, and even Google have adapted virtual reality to bring in larger audiences and give users an experience they have never witnessed before. The Oculus Rift and the HTC Vive, both virtual reality consoles featuring a headset, have made staple games such as Minecraft and Call of Duty compatible with virtual reality to give gamers the sensation that they are actually within the video game. Coming from playing games on television for the majority of my life, playing some of my favorite games on virtual reality consoles gave me a completely new experience. However, it was hard for me to make that transition from traditional-style games to virtual reality. I’d feel comfortable making the complete transition to virtual reality once there is a growing platform for it since it is still in its early stages as of today. Samsung and Google have taken slightly different routes, offering movies to be seen through a virtual reality lens, immersing users to their best capability. Although virtual reality is commonly tied to video games or other forms of entertainment, virtual reality is also essential in many of the growing careers around the world, particularly the medical field and military field. According to an article on Forbes, “VR Training Next Generation Of Workers”, potential LASD officers went through a virtual reality training featuring the “VirTra” system that gave trainees an extremely realistic simulation of tackling an altercation. Those that were trained through this system responded that using virtual reality to tackle this objective was “much more realistic than range training” and also got their heart rate up as though it was a real-life scenario. This clearly reflects the benefits of using virtual reality in career training courses as it offers a similar experience to actual reality. Furthermore, in the medical field, virtual reality allows doctors, surgeons, nurses, and other related medical occupations to understand their patient’s bodies better than other technological equipment already present. Compared to a traditional X-Ray scan, virtual reality technology can allow those utilizing it to have a full high-resolution 3D image of the patient with access to look all around the body.

The vast future of technology is also present in our economy, typically known as e-commerce. Though e-commerce is more of a concept rather than a technology, some technologies such as cryptocurrencies fall into the line of the future of e-commerce. As mentioned before, cryptocurrency serves as a medium of exchange while maintaining strong cryptography to secure all types of financial transactions. Rather than using traditional forms of currency such as paper money or coins, cryptocurrency will replace these through digital wallets and digital currencies. If we were to make the complete switch to cryptocurrency today, I would be able to save a lot of time conducting transactions in person since everything would be stored in a digital wallet on my smartphone. One of the biggest forms of cryptocurrency is Bitcoin, leading the charge with a value of $3,440 per 1 single Bitcoin. Although transitioning to cryptocurrency will turn the future of the economy in a different direction, there are some downsides to making this switch. Nicholas Weaver’s journal article, Risks Of Cryptocurrency, dives closer into the negatives of cryptocurrency. Specifically, he mentions that majority of cryptocurrency is controlled through public and private keys, making theft much more “vulnerable” if someone was to get a hold of your private key. Cryptocurrency will take longer to be implemented into our economy since it is such a complicated concept. Many people will need to be educated deeply about this alternative form of currency before it becoming implemented and revolutionizing the economy right before our eyes. On the other hand, we see the expansion of technology taking a toll on social media. As technology continues to expand globally, even reaching areas of low income, the social media population will exponentially increase as well. Social media, as a whole, has been used by a variety of age groups, stemming from adolescents to middle-aged people. Social media has began to become a daily activity in many active internet user’s lives, with about 51% of Facebook users accessing their social media profiles multiple times a day and 23% at least once a day. With over one billion profiles, 74% of registered Facebook users are on the application at least once a day (check graph below). This is a huge percentage when taking into account how many people have created Facebook profiles. Through these social media platforms, users are investing hours of their day sharing content to friends and family, but are slowly disconnecting from the real world. If social media grows and the majority of society is consumed, how will the future generation look?

Although these technological advancements have proven to be capable to revolutionize the world, there is still the aspect of whether or not the impact would help our society. Honing in on social media, the majority of users tend to rely on the content posted on social media rather than what is actually being portrayed. A scientific research group, PLOS One, conducted an experiment on how social media has led to a social impact on those that use social media. In the end, they concluded that “citizens will pay more attention to the content published in social media” revealing a major switch in the way people gather information in this generation. Therefore, the future of social media could force people to be open to believing fake news and other content shared through social media. Virtual reality will also revolutionize the way people live. In order to give humans a new type of lifestyle experience, virtual reality will be implemented into daily use, outside of video games and entertainment. According to Pew Research, social and business encounters will be shaped all-around virtual reality, making interactions with data and objects much easier. Jaron Lanier’s book, Dawn Of The New Everything, discusses the future possibilities of virtual reality and their chance to help those going through PTSD overcome their obstacles. On the other hand, technology in the future will end up replacing jobs for humans and instead have robots and other advanced intelligent machinery running the work field. Self-driving cars will replace cab and delivery drivers, robots will replace those working in mass assembly lines, and the list goes on. The future of technology is an interesting concept to think about and experience, but in the long term, technology has the possibility to destroy the way humans live their lives, especially those that will be growing up while this transformation happens.

The closer we get to implementing newer technologies in the world, the closer society gets to becoming revolutionized. Virtual reality giving humans easier access to the world, newer cryptocurrency forms presenting a potential problem in our economy, social media taking over humans lives, we are all subject to a mixed lifestyle. The future cannot be placed on a spectrum of being good or bad because the negatives don’t outweigh the positives and vice versa. The future is near. Be prepared.

Virtual Reality: The Future Is Here. (2021, Jun 02). Retrieved from https://papersowl.com/examples/virtual-reality-the-future-is-here/

Are Virtual Reality Becoming more a Part of our Reality than Before?

What are Virtual and Augmented Reality?