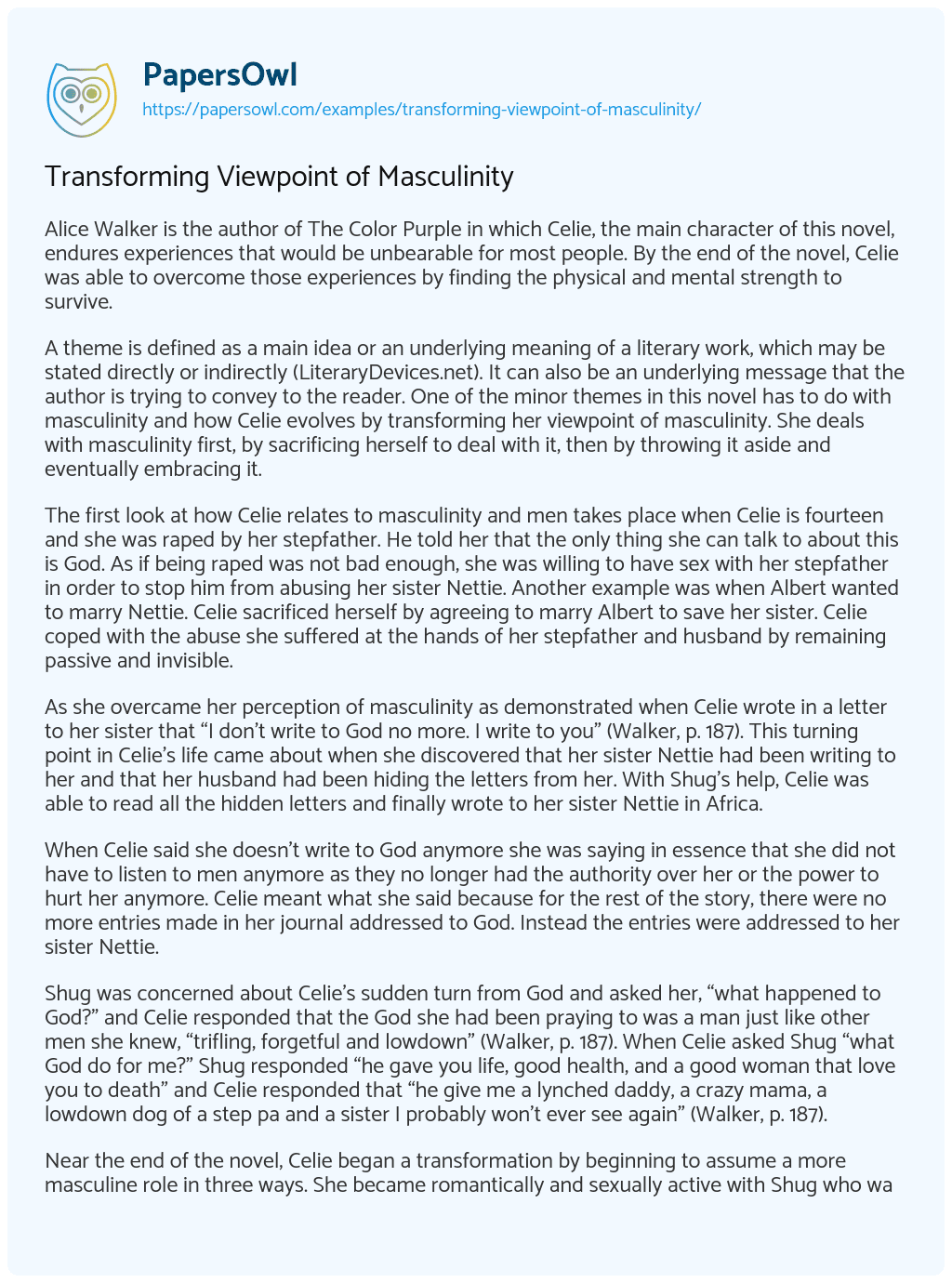 Alice Walker is the author of The Color Purple in which Celie, the main character of this novel, endures experiences that would be unbearable for most people. By the end of the novel, Celie was able to overcome those experiences by finding the physical and mental strength to survive.

A theme is defined as a main idea or an underlying meaning of a literary work, which may be stated directly or indirectly (LiteraryDevices.net). It can also be an underlying message that the author is trying to convey to the reader. One of the minor themes in this novel has to do with masculinity and how Celie evolves by transforming her viewpoint of masculinity. She deals with masculinity first, by sacrificing herself to deal with it, then by throwing it aside and eventually embracing it.

The first look at how Celie relates to masculinity and men takes place when Celie is fourteen and she was raped by her stepfather. He told her that the only thing she can talk to about this is God. As if being raped was not bad enough, she was willing to have sex with her stepfather in order to stop him from abusing her sister Nettie. Another example was when Albert wanted to marry Nettie. Celie sacrificed herself by agreeing to marry Albert to save her sister. Celie coped with the abuse she suffered at the hands of her stepfather and husband by remaining passive and invisible.

As she overcame her perception of masculinity as demonstrated when Celie wrote in a letter to her sister that “I don’t write to God no more. I write to you” (Walker, p. 187). This turning point in Celie’s life came about when she discovered that her sister Nettie had been writing to her and that her husband had been hiding the letters from her. With Shug’s help, Celie was able to read all the hidden letters and finally wrote to her sister Nettie in Africa.

When Celie said she doesn’t write to God anymore she was saying in essence that she did not have to listen to men anymore as they no longer had the authority over her or the power to hurt her anymore. Celie meant what she said because for the rest of the story, there were no more entries made in her journal addressed to God. Instead the entries were addressed to her sister Nettie.

Shug was concerned about Celie’s sudden turn from God and asked her, “what happened to God?” and Celie responded that the God she had been praying to was a man just like other men she knew, “trifling, forgetful and lowdown” (Walker, p. 187). When Celie asked Shug “what God do for me?” Shug responded “he gave you life, good health, and a good woman that love you to death” and Celie responded that “he give me a lynched daddy, a crazy mama, a lowdown dog of a step pa and a sister I probably won’t ever see again” (Walker, p. 187).

Near the end of the novel, Celie began a transformation by beginning to assume a more masculine role in three ways. She became romantically and sexually active with Shug who was originally her husband’s mistress. Also, she began wearing masculine clothing. Shug was trying to empower Celie when she suggested that she wear pants because Celie does all of the work. Next, she began her own business making pants. With Shug’s help, Celie overturns the idea that sewing is unimportant women’s labor and she turns it into an empowering source of economic independence which is traditionally a masculine role.

In the end, Celie suffered but found the will to survive through the author’s underlying theme of transforming masculinity. After learning that subjugating herself to the masculine roles in her life was not serving her, Celie threw out her views of masculinity including renouncing God. She finally transformed herself by embracing and becoming what some would say was a more traditional masculine role.

Gender Roles and Racism in the Color Purple

Themes in the Color Purple by Alice Walker

The Accuracy of the Color Purple

Communication in Kafka’s and Walker’s Stories