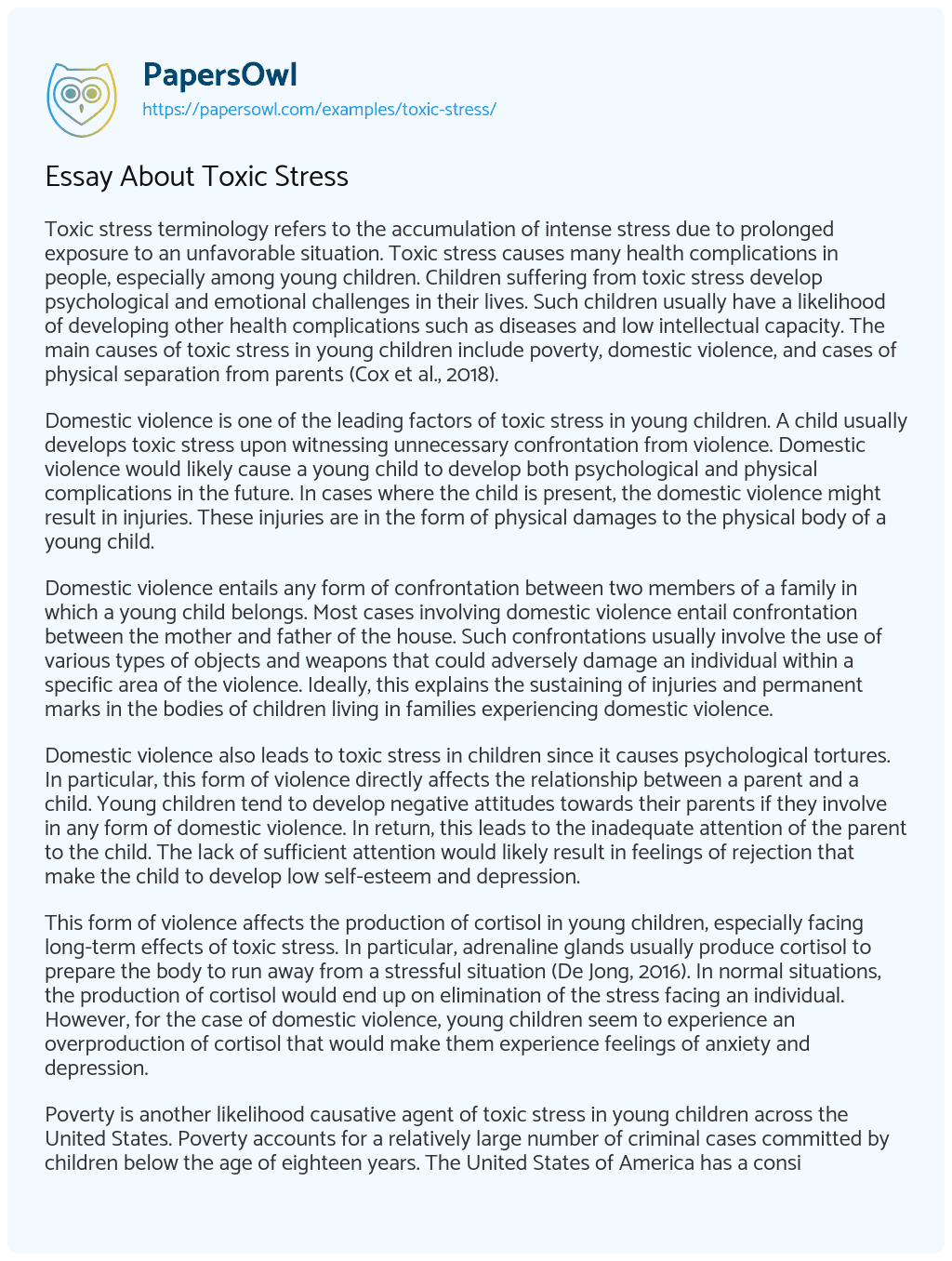 Toxic stress terminology refers to the accumulation of intense stress due to prolonged exposure to an unfavorable situation. Toxic stress causes many health complications in people, especially among young children. Children suffering from toxic stress develop psychological and emotional challenges in their lives. Such children usually have a likelihood of developing other health complications such as diseases and low intellectual capacity. The main causes of toxic stress in young children include poverty, domestic violence, and cases of physical separation from parents (Cox et al., 2018).

Domestic violence also leads to toxic stress in children since it causes psychological tortures. In particular, this form of violence directly affects the relationship between a parent and a child. Young children tend to develop negative attitudes towards their parents if they involve in any form of domestic violence. In return, this leads to the inadequate attention of the parent to the child. The lack of sufficient attention would likely result in feelings of rejection that make the child to develop low self-esteem and depression.

Poverty is another likelihood causative agent of toxic stress in young children across the United States. Poverty accounts for a relatively large number of criminal cases committed by children below the age of eighteen years. The United States of America has a considerably large number of children living in poverty. Poverty causes depression in children due to lack of basic needs that make such kids feel inferior to their counterparts from rich backgrounds. As a result, this feeling of inferiority amounts to a stressful situation in young children across the globe.

Poverty leads to financial inequalities within a given community, which results in further detrimental effects on children. These disparities in financial resources lead to the inability of parents to cater for the needs of their children. The well-being of children encompasses the ability of parents to provide adequate care and seek medical attention whenever the need arises. Nevertheless, parents living in poverty do not have the potential to seek medical services for their kids. Further, this means that whenever such children develop health complications, it will be difficult for them to acquire quality interventions.

Children living in poverty experience long encounters with diseases and other psychological difficulties. Lack of timely and sufficient response to health complications affecting children causes further challenges in the well-being such kids. In this case, children would likely develop depression and might even feel abandoned by their parents. Consequently, such lack of medical attention would promote the development of stress to levels, which are difficult to handle. Children, therefore, seem to experience a deterioration of their physical and emotional well-being.

Poverty amounts to toxic stress in children, which then leads to interference in brain functioning and cognitive development of the children. A child growing up in poverty would likely experience lower thinking capacity due to automatic responses of the body to environmental changes. Toxic stress resulting from the presence of poverty ultimately amounts to negative gene expression. The negative gene expression would lead to poor brain development. Consequently, this leads to unfavorable manifestation in the intellectual capacity of a child in the form of low creativity.

Poverty causes children to experience psychiatric disorders as well as the development of poor cognitive skills (Cox et al., 2018). The psychiatric disorders entail all forms of disorders that are likely to cause a reduction in the thinking capacity of a young child. As a result, this leads to poor decision-making and an inability to identify opportunities in life. Consequently, poor cognitive skills are likely to promote poverty within a population of people. Poverty causes toxic stress due to prolonged exposure of young children to the disastrous and stressful situation over a long time.

Another crucial cause of toxic stress in young children is separation from their parents through cases such as an eruption of war, natural calamity, or a disease outbreak. A large number of children live as refugees or asylum seekers within the United States (Hirsh-Pasek, 2018). Such children have very high chances of developing toxic stress in their lifetimes mainly because prolonged alienation from their family members could accumulate stress over time, which then matures to a toxic level. Toxic stress originating from this scenario leads to poor development of cognitive skills and anxiety among children.

Scary situations such as war have a direct impact on the brain of a child just like its effect on an adult’s brain. In this regard, a child that experiences a dangerous scenario would develop psychological and emotional challenges in future even if the child does not remember the actual danger. This phenomenon leads to poor brain development and depression. The chemical hormones released during an encounter with stressful situation affects the functioning of the human brain. A child would in future develop feelings of anxiety and poor social skills.

Attachment is an important component of child development, especially in a situation that demands the care of a parent. Whenever a young child experiences a situation of terror, he or she tends to seek protection from the parent. Scenarios such as war and natural calamities lead to forceful separation of children from their parents. Further, this makes it impossible for children to locate their parents whenever they face the unfavorable situations. This lack of an attachment makes the brain to produce toxic chemicals that flood the body with stress. Subsequently, the child experiences anxiety and deep depression that results in toxic stress.

In conclusion, the above discussion indicates that toxic stress is a very detrimental aspect to the well-being of young children. Toxic stress usually leads to other complications such as anxiety, depression, poor cognitive skills, and unfavorable production of cortisol. The government and other relevant bodies ought to implement measures that would aim to safeguard the well-being of young children. Such measures should focus on eliminating any form of activities that would likely lead to an accumulation of stress among young children.

Essay About Toxic Stress. (2019, May 25). Retrieved from https://papersowl.com/examples/toxic-stress/

The Main Reasons of Suffer from Stress

Examining Stress and Well being in College Students