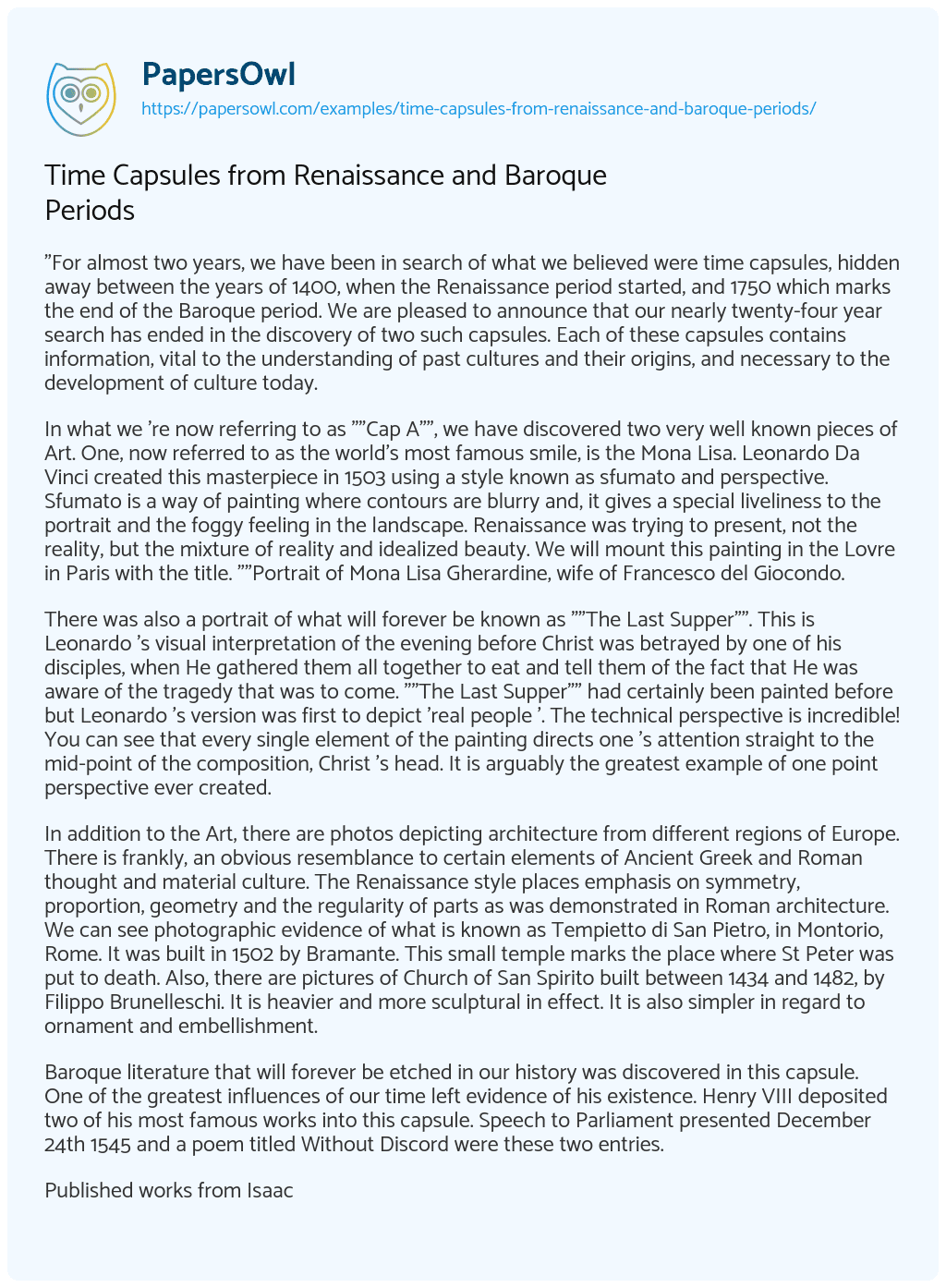 “For almost two years, we have been in search of what we believed were time capsules, hidden away between the years of 1400, when the Renaissance period started, and 1750 which marks the end of the Baroque period. We are pleased to announce that our nearly twenty-four year search has ended in the discovery of two such capsules. Each of these capsules contains information, vital to the understanding of past cultures and their origins, and necessary to the development of culture today.

In what we ‘re now referring to as “”Cap A””, we have discovered two very well known pieces of Art. One, now referred to as the world’s most famous smile, is the Mona Lisa. Leonardo Da Vinci created this masterpiece in 1503 using a style known as sfumato and perspective. Sfumato is a way of painting where contours are blurry and, it gives a special liveliness to the portrait and the foggy feeling in the landscape. Renaissance was trying to present, not the reality, but the mixture of reality and idealized beauty. We will mount this painting in the Lovre in Paris with the title. “”Portrait of Mona Lisa Gherardine, wife of Francesco del Giocondo.

There was also a portrait of what will forever be known as “”The Last Supper””. This is Leonardo ‘s visual interpretation of the evening before Christ was betrayed by one of his disciples, when He gathered them all together to eat and tell them of the fact that He was aware of the tragedy that was to come. “”The Last Supper”” had certainly been painted before but Leonardo ‘s version was first to depict ‘real people ‘. The technical perspective is incredible! You can see that every single element of the painting directs one ‘s attention straight to the mid-point of the composition, Christ ‘s head. It is arguably the greatest example of one point perspective ever created.

In addition to the Art, there are photos depicting architecture from different regions of Europe. There is frankly, an obvious resemblance to certain elements of Ancient Greek and Roman thought and material culture. The Renaissance style places emphasis on symmetry, proportion, geometry and the regularity of parts as was demonstrated in Roman architecture. We can see photographic evidence of what is known as Tempietto di San Pietro, in Montorio, Rome. It was built in 1502 by Bramante. This small temple marks the place where St Peter was put to death. Also, there are pictures of Church of San Spirito built between 1434 and 1482, by Filippo Brunelleschi. It is heavier and more sculptural in effect. It is also simpler in regard to ornament and embellishment.

Baroque literature that will forever be etched in our history was discovered in this capsule. One of the greatest influences of our time left evidence of his existence. Henry VIII deposited two of his most famous works into this capsule. Speech to Parliament presented December 24th 1545 and a poem titled Without Discord were these two entries.

Published works from Isaac Newton and Galileo Galilei were injected into this container. Isaac Newton was established as the leading intellectual of his age. From him we have what is considered to be the most influential book in the history of science which describes universal gravitation and the three laws of motion. Galileo Galilei was a Tuscan physicist, mathematician, astronomer, and philosopher who played a major role in the Scientific Revolution. His achievements include improvements to the telescope and consequent astronomical observations. He is now known as the Father of Modern Science, Astronomy and Physics. We have a copy of his work, On Motion and On Mechanics, Comprising De Motu. Sheets of music written and composed by both Johannes Okghem and Josquin des Prez were found. Two pieces called “Missa Ma Maistresse” and “Missa Gors Seulement”, deposited by Johannes Okeghem, we discovered contained borrowd material and may not be what we initially attributed to the composer. Josquin de Prez submitted a musical tribte to Okghen when he died called “La deploration de la mort de Johannes Okghem”. He also composed and left for us, Missa Prolatium”.

There was a second capsule discovered which we’ll call Capsule B. In this capsule are reminders for us of life during the Baroque Period. John Locke, who was born in 1632 and died at the age of 73, left for us his most famous works. The Essay Concerning Human Understanding tries to answer the questions where ideas come from and are our senses reliable. Another very famous, more reliable philosopher, Baruch Spinoza left behind his works in which he discredited the scriptures because he said they were all influenced by the period in which they were written. He claimed that Jesus preached a religion of reason that valued love higher that all else. He was later excommunicated.

It seems, one week after his death, Peter Paul Rubens home was inventoried and there were thousands of works found inside. The Adoration of the Magi, and Sampson and Delilah were found among the collection of work. Renaissance literature that will forever be etched in our minds was discovered in this capsule. One of the greatest influences of our time left evidence of his existence. William Shakespeare deposited two of his most famous works into this capsule. Romeo and Juliet and Hamlet were these two literary masterpieces. Although Shakespeare never published any of his work, he did feel it important to leave these two plays in this capsule.

Antonio Vivaldi is the creator of hundreds of spirited, extroverted instrumental works and is widely recognized as the master of the Baroque instrumental concerto. His work included, Montezuma RV723 and its original sheet music was found inside. We also have from Johanne Sebastan Bach, his most famous work. Jesu bleibet meine Freude.

The last piece of from this most interesting period known to us now as the Baroque period is photographic evidence that there existed some of the most beautiful and elaborate architecture ever built. We have photos of the Villa Peretti constructed in 1570 by Domenico Fontana. Fontana was responsible for the new urban design of Rome including the erection of many obelisks. We have photos of what is now known as the Villa Aldobrandini, by Caro Lambardi. The level of the street where the Villa stands today is slightly lower than it was in the 1600s so the former entrance is a window and a small flight of stairs is required to enter.

We have learned so much about the periods of Renaissance and of Baroque through historians records and stories handed down through generations, but today we are pleased to be informed of such profound history, art and sciences by what the people of these times have left specifically for us. These capsules will serve as solid and trustworthy information and will be protected and preserved in the countries in which they were originated. They will be displayed in various museums throughout Rome and Italy.”

How did Leonardo Da Vinci Influence the Renaissance?

The Catholic Reformation and the Baroque Style