The Theme of Rivalry in Romeo and Juliet 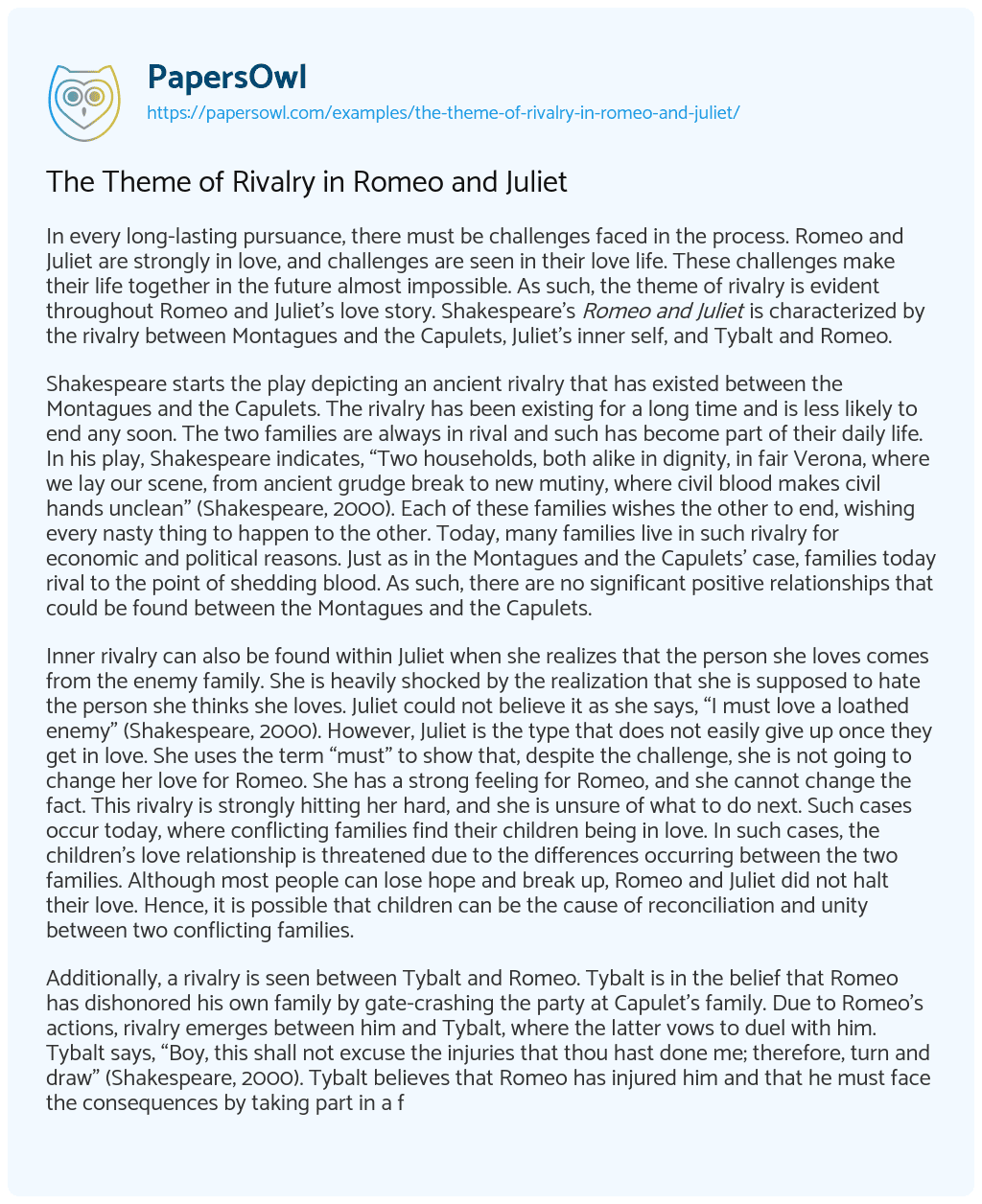 In every long-lasting pursuance, there must be challenges faced in the process. Romeo and Juliet are strongly in love, and challenges are seen in their love life. These challenges make their life together in the future almost impossible. As such, the theme of rivalry is evident throughout Romeo and Juliet’s love story. Shakespeare’s Romeo and Juliet is characterized by the rivalry between Montagues and the Capulets, Juliet’s inner self, and Tybalt and Romeo.

Shakespeare starts the play depicting an ancient rivalry that has existed between the Montagues and the Capulets. The rivalry has been existing for a long time and is less likely to end any soon. The two families are always in rival and such has become part of their daily life. In his play, Shakespeare indicates, “Two households, both alike in dignity, in fair Verona, where we lay our scene, from ancient grudge break to new mutiny, where civil blood makes civil hands unclean” (Shakespeare, 2000). Each of these families wishes the other to end, wishing every nasty thing to happen to the other. Today, many families live in such rivalry for economic and political reasons. Just as in the Montagues and the Capulets’ case, families today rival to the point of shedding blood. As such, there are no significant positive relationships that could be found between the Montagues and the Capulets.

Inner rivalry can also be found within Juliet when she realizes that the person she loves comes from the enemy family. She is heavily shocked by the realization that she is supposed to hate the person she thinks she loves. Juliet could not believe it as she says, “I must love a loathed enemy” (Shakespeare, 2000). However, Juliet is the type that does not easily give up once they get in love. She uses the term “must” to show that, despite the challenge, she is not going to change her love for Romeo. She has a strong feeling for Romeo, and she cannot change the fact. This rivalry is strongly hitting her hard, and she is unsure of what to do next. Such cases occur today, where conflicting families find their children being in love. In such cases, the children’s love relationship is threatened due to the differences occurring between the two families. Although most people can lose hope and break up, Romeo and Juliet did not halt their love. Hence, it is possible that children can be the cause of reconciliation and unity between two conflicting families.

Additionally, a rivalry is seen between Tybalt and Romeo. Tybalt is in the belief that Romeo has dishonored his own family by gate-crashing the party at Capulet’s family. Due to Romeo’s actions, rivalry emerges between him and Tybalt, where the latter vows to duel with him. Tybalt says, “Boy, this shall not excuse the injuries that thou hast done me; therefore, turn and draw” (Shakespeare, 2000). Tybalt believes that Romeo has injured him and that he must face the consequences by taking part in a fight. As such, the rivalry becomes personalized between the two and not between the families, threatening Romeo’s safety. Due to such rivalry, his love relationship with Juliet is also put at risk. The conflict between Tybalt and Romeo adds to the rivalry between the two families. However, the good part is that Juliet is determined and can never be stopped from loving Romeo.

In conclusion, a rivalry is witnessed in Shakespeare’s Romeo and Juliet as there are conflicts between the Montagues and the Capulets, within Juliet’s inner self, as well as between Tybalt and Romeo. All these rivalries make love between Romeo and Juliet almost risky and impossible. Juliet is worried that she is supposed to hate the man she loves wholeheartedly. However, despite these rivalries, their love prevails.

The Theme of Rivalry in Romeo and Juliet. (2021, Feb 16). Retrieved from https://papersowl.com/examples/the-theme-of-rivalry-in-romeo-and-juliet/

The Theme of Gender being Shown in Romeo & Juliet

The Role of Fate in Shakespeare’s Romeo and Juliet