The Study of Black Holes 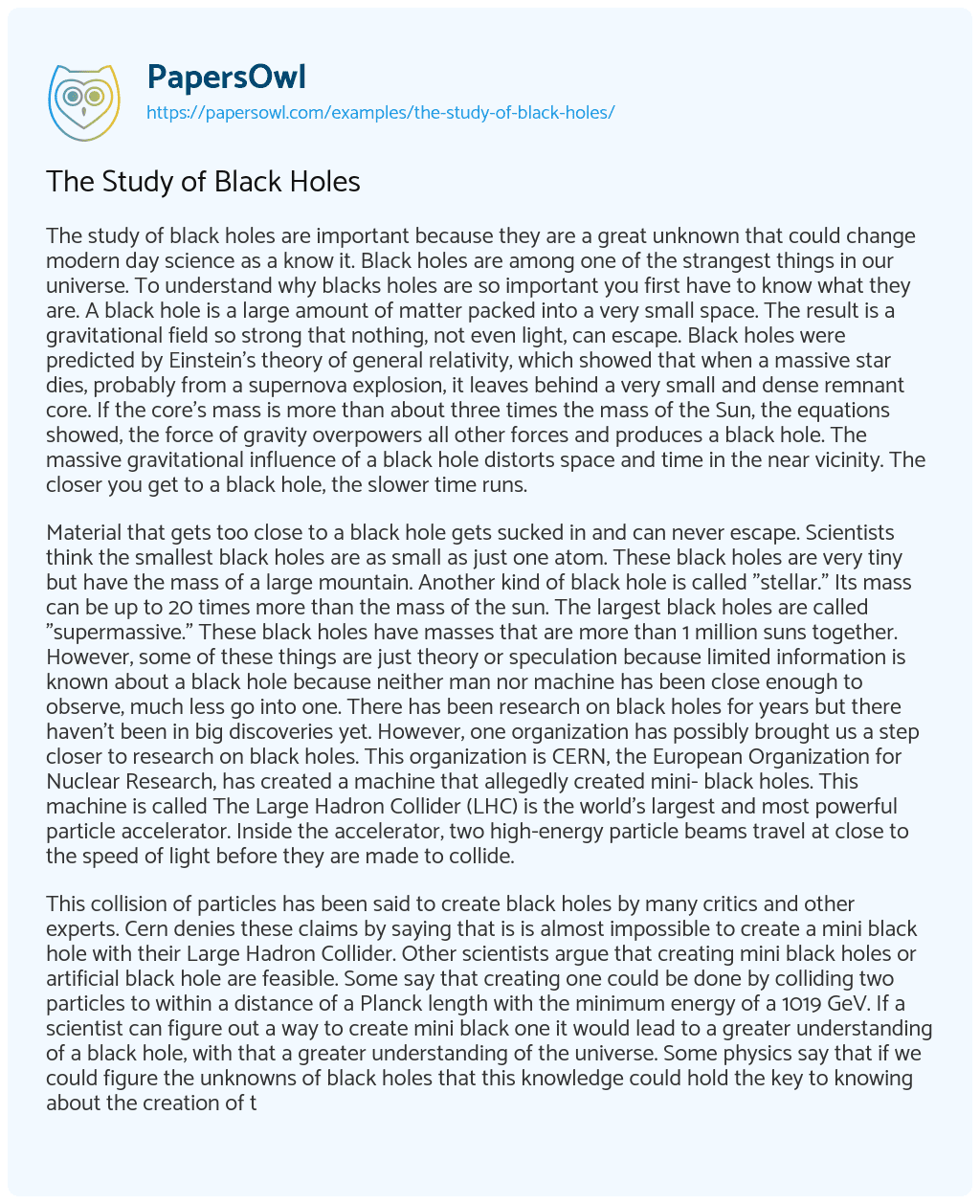 The study of black holes are important because they are a great unknown that could change modern day science as a know it. Black holes are among one of the strangest things in our universe. To understand why blacks holes are so important you first have to know what they are. A black hole is a large amount of matter packed into a very small space. The result is a gravitational field so strong that nothing, not even light, can escape. Black holes were predicted by Einstein’s theory of general relativity, which showed that when a massive star dies, probably from a supernova explosion, it leaves behind a very small and dense remnant core. If the core’s mass is more than about three times the mass of the Sun, the equations showed, the force of gravity overpowers all other forces and produces a black hole. The massive gravitational influence of a black hole distorts space and time in the near vicinity. The closer you get to a black hole, the slower time runs.

Material that gets too close to a black hole gets sucked in and can never escape. Scientists think the smallest black holes are as small as just one atom. These black holes are very tiny but have the mass of a large mountain. Another kind of black hole is called “stellar.” Its mass can be up to 20 times more than the mass of the sun. The largest black holes are called “supermassive.” These black holes have masses that are more than 1 million suns together. However, some of these things are just theory or speculation because limited information is known about a black hole because neither man nor machine has been close enough to observe, much less go into one. There has been research on black holes for years but there haven’t been in big discoveries yet. However, one organization has possibly brought us a step closer to research on black holes. This organization is CERN, the European Organization for Nuclear Research, has created a machine that allegedly created mini- black holes. This machine is called The Large Hadron Collider (LHC) is the world’s largest and most powerful particle accelerator. Inside the accelerator, two high-energy particle beams travel at close to the speed of light before they are made to collide.

This collision of particles has been said to create black holes by many critics and other experts. Cern denies these claims by saying that is is almost impossible to create a mini black hole with their Large Hadron Collider. Other scientists argue that creating mini black holes or artificial black hole are feasible. Some say that creating one could be done by colliding two particles to within a distance of a Planck length with the minimum energy of a 1019 GeV. If a scientist can figure out a way to create mini black one it would lead to a greater understanding of a black hole, with that a greater understanding of the universe. Some physics say that if we could figure the unknowns of black holes that this knowledge could hold the key to knowing about the creation of the universe, addition dimensions that we aren’t don’t already know about and even parallel universes. Stephen Hawking, a renowned physicist, is known for his theory on black holes. He argues that maybe black holes aren’t actually “eternal prisons” but actually gateways to other dimensions and alternative histories.

His theory if correct could change your understanding of the universe altogether. Similar Hawking’s theory is the black hole scene towards the end of the movie “Interstellar”. The main character intentionally went into a black hole and what he found there was quite interesting. He was in what they called the 5th dimension. He was able to go through travel through space and time. The movie director Christopher Nolan got his inspiration for this scene from Kip Thorne, who served as both science advisor and executive producer on the film. Thorne said that many things in that movie where scientifically accurate but some were not. Since the most of what we know about black holes are just theory Nolan and Thorne used some imagination in the making of that movie. The study of the unknowns of the black holes is very important to our understanding of the universe and change the way we think about science as a whole. They could give us a better understanding of how the universe was made, and If scientist can figure out the mystery of the black hole then we could possibly someday be able to enter alternate dimension and parallel realities.

The Study of Black Holes. (2019, Sep 09). Retrieved from https://papersowl.com/examples/the-study-of-black-holes/

What are Black Holes?

The Phenomenon of Black Holes

Black Holes: Mysterious in Many Ways

Myths and Folktales about Black Holes