The Significance of Redemption in Arthur Miller’s the Crucible 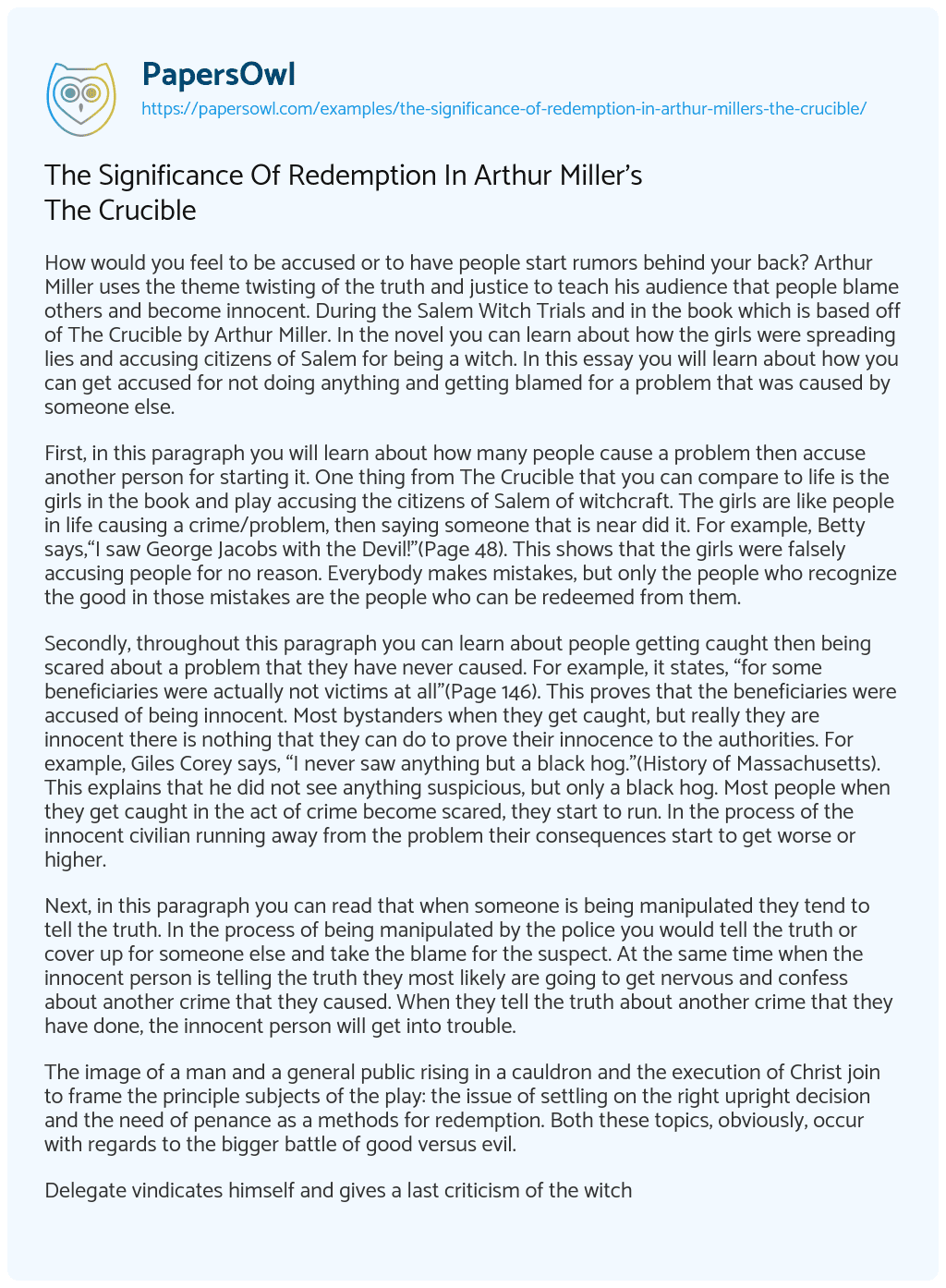 How would you feel to be accused or to have people start rumors behind your back? Arthur Miller uses the theme twisting of the truth and justice to teach his audience that people blame others and become innocent. During the Salem Witch Trials and in the book which is based off of The Crucible by Arthur Miller. In the novel you can learn about how the girls were spreading lies and accusing citizens of Salem for being a witch. In this essay you will learn about how you can get accused for not doing anything and getting blamed for a problem that was caused by someone else.

First, in this paragraph you will learn about how many people cause a problem then accuse another person for starting it. One thing from The Crucible that you can compare to life is the girls in the book and play accusing the citizens of Salem of witchcraft. The girls are like people in life causing a crime/problem, then saying someone that is near did it. For example, Betty says,“I saw George Jacobs with the Devil!”(Page 48). This shows that the girls were falsely accusing people for no reason. Everybody makes mistakes, but only the people who recognize the good in those mistakes are the people who can be redeemed from them.

Secondly, throughout this paragraph you can learn about people getting caught then being scared about a problem that they have never caused. For example, it states, “for some beneficiaries were actually not victims at all”(Page 146). This proves that the beneficiaries were accused of being innocent. Most bystanders when they get caught, but really they are innocent there is nothing that they can do to prove their innocence to the authorities. For example, Giles Corey says, “I never saw anything but a black hog.”(History of Massachusetts). This explains that he did not see anything suspicious, but only a black hog. Most people when they get caught in the act of crime become scared, they start to run. In the process of the innocent civilian running away from the problem their consequences start to get worse or higher.

Next, in this paragraph you can read that when someone is being manipulated they tend to tell the truth. In the process of being manipulated by the police you would tell the truth or cover up for someone else and take the blame for the suspect. At the same time when the innocent person is telling the truth they most likely are going to get nervous and confess about another crime that they caused. When they tell the truth about another crime that they have done, the innocent person will get into trouble.

The image of a man and a general public rising in a cauldron and the execution of Christ join to frame the principle subjects of the play: the issue of settling on the right upright decision and the need of penance as a methods for redemption. Both these topics, obviously, occur with regards to the bigger battle of good versus evil.

Delegate vindicates himself and gives a last criticism of the witch preliminaries in his last venture. Offered the chance to make a public admission of his blame and live, he nearly surrenders, in any event, marking a composed admission. His tremendous pride and dread of popular assessment constrained him to retain his infidelity from the court, yet before the finish of the play he is more worried about his own honesty than his public standing. He actually needs to save his name, yet for individual and strict, instead of public, reasons. Delegate’s refusal to give a bogus admission is a genuine strict and individual stand. Such an admission would disrespect his kindred detainees, who are sufficiently daring to kick the bucket as declaration to reality. Maybe more pertinently, a bogus confirmation would likewise shame him, tarnishing his public standing, yet additionally his spirit. By declining to surrender his own respectability Proctor certainly declares his conviction that such uprightness will carry him to paradise. He goes to the hangman’s tree recovered for his prior sins. As Elizabeth says to end the play, reacting to Hale’s request that she persuade Proctor to openly admit: “He have his decency now. God preclude I take it from him!”

Finally, in the last paragraph you can learn that if the girls do not get caught or blamed it turns out to be a good thing. Sometimes when the suspect flees the crime scene before the police come, he may have enough time to run away and hide. Most of the time there is not a single bystander that sees you, so that you still have time to hide for nobody to find you. If you are seen by an innocent person you will get caught.

In conclusion, in desperate situations, individuals who possess insight are able to experience redemption.

The Significance Of Redemption In Arthur Miller's The Crucible. (2021, Jul 04). Retrieved from https://papersowl.com/examples/the-significance-of-redemption-in-arthur-millers-the-crucible/

Puritanism in “The Crucible” Arthur Miller

About a Dramatized the Crucible by Arthur Miller

Symbolism in the Crucible