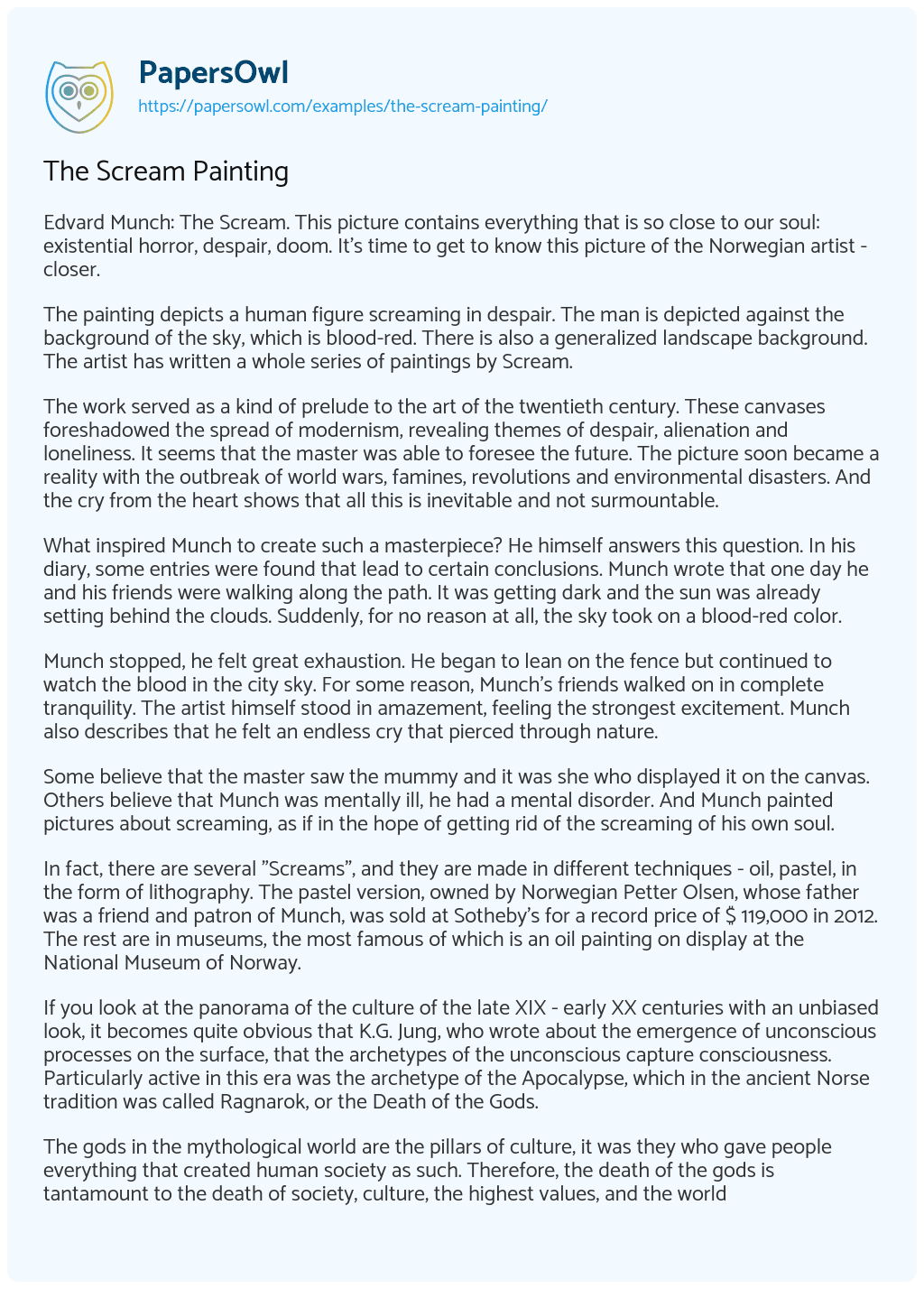 Edvard Munch: The Scream. This picture contains everything that is so close to our soul: existential horror, despair, doom. It’s time to get to know this picture of the Norwegian artist – closer.

The painting depicts a human figure screaming in despair. The man is depicted against the background of the sky, which is blood-red. There is also a generalized landscape background. The artist has written a whole series of paintings by Scream.

The work served as a kind of prelude to the art of the twentieth century. These canvases foreshadowed the spread of modernism, revealing themes of despair, alienation and loneliness. It seems that the master was able to foresee the future. The picture soon became a reality with the outbreak of world wars, famines, revolutions and environmental disasters. And the cry from the heart shows that all this is inevitable and not surmountable.

What inspired Munch to create such a masterpiece? He himself answers this question. In his diary, some entries were found that lead to certain conclusions. Munch wrote that one day he and his friends were walking along the path. It was getting dark and the sun was already setting behind the clouds. Suddenly, for no reason at all, the sky took on a blood-red color.

Munch stopped, he felt great exhaustion. He began to lean on the fence but continued to watch the blood in the city sky. For some reason, Munch’s friends walked on in complete tranquility. The artist himself stood in amazement, feeling the strongest excitement. Munch also describes that he felt an endless cry that pierced through nature.

Some believe that the master saw the mummy and it was she who displayed it on the canvas. Others believe that Munch was mentally ill, he had a mental disorder. And Munch painted pictures about screaming, as if in the hope of getting rid of the screaming of his own soul.

In fact, there are several “Screams”, and they are made in different techniques – oil, pastel, in the form of lithography. The pastel version, owned by Norwegian Petter Olsen, whose father was a friend and patron of Munch, was sold at Sotheby’s for a record price of $ 119,000 in 2012. The rest are in museums, the most famous of which is an oil painting on display at the National Museum of Norway.

If you look at the panorama of the culture of the late XIX – early XX centuries with an unbiased look, it becomes quite obvious that K.G. Jung, who wrote about the emergence of unconscious processes on the surface, that the archetypes of the unconscious capture consciousness. Particularly active in this era was the archetype of the Apocalypse, which in the ancient Norse tradition was called Ragnarok, or the Death of the Gods.

The gods in the mythological world are the pillars of culture, it was they who gave people everything that created human society as such. Therefore, the death of the gods is tantamount to the death of society, culture, the highest values, and the world order. Chaos, elements, the Uncontrollable went to battle with the Orderly, created, civilized world – that’s what Ragnarok is.

And that’s what the cry of nature, heard by Munch on the bridge! The call of the unbridled, chaotic, unmanageable, howling element, which seeks to destroy and absorb the cultural, understandable, well-equipped human being. Of course it’s scary! Scary to the point of insanity – and it is not surprising that artists (such as Munch) or philosophers (such as Nietzsche), who tried to convey what they heard from chaos, from the unconscious, could not stand it, went crazy. It is not in human power to withstand the cry of nature.