The Heroic Journey of Sir Gawain and the Green Knight 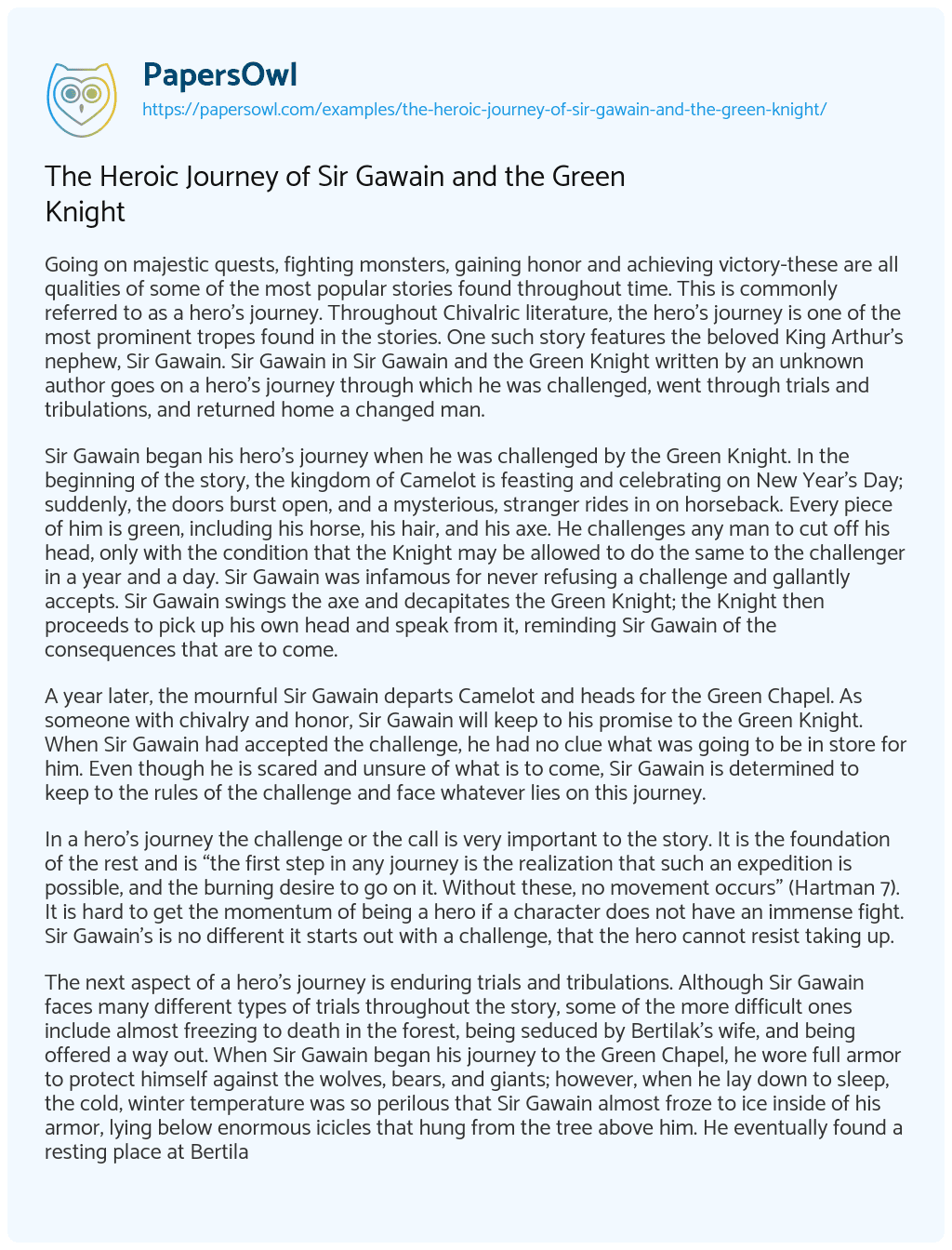 Going on majestic quests, fighting monsters, gaining honor and achieving victory-these are all qualities of some of the most popular stories found throughout time. This is commonly referred to as a hero’s journey. Throughout Chivalric literature, the hero’s journey is one of the most prominent tropes found in the stories. One such story features the beloved King Arthur’s nephew, Sir Gawain. Sir Gawain in Sir Gawain and the Green Knight written by an unknown author goes on a hero’s journey through which he was challenged, went through trials and tribulations, and returned home a changed man.

Sir Gawain began his hero’s journey when he was challenged by the Green Knight. In the beginning of the story, the kingdom of Camelot is feasting and celebrating on New Year’s Day; suddenly, the doors burst open, and a mysterious, stranger rides in on horseback. Every piece of him is green, including his horse, his hair, and his axe. He challenges any man to cut off his head, only with the condition that the Knight may be allowed to do the same to the challenger in a year and a day. Sir Gawain was infamous for never refusing a challenge and gallantly accepts. Sir Gawain swings the axe and decapitates the Green Knight; the Knight then proceeds to pick up his own head and speak from it, reminding Sir Gawain of the consequences that are to come.

A year later, the mournful Sir Gawain departs Camelot and heads for the Green Chapel. As someone with chivalry and honor, Sir Gawain will keep to his promise to the Green Knight. When Sir Gawain had accepted the challenge, he had no clue what was going to be in store for him. Even though he is scared and unsure of what is to come, Sir Gawain is determined to keep to the rules of the challenge and face whatever lies on this journey.

In a hero’s journey the challenge or the call is very important to the story. It is the foundation of the rest and is “the first step in any journey is the realization that such an expedition is possible, and the burning desire to go on it. Without these, no movement occurs” (Hartman 7). It is hard to get the momentum of being a hero if a character does not have an immense fight. Sir Gawain’s is no different it starts out with a challenge, that the hero cannot resist taking up.

The next aspect of a hero’s journey is enduring trials and tribulations. Although Sir Gawain faces many different types of trials throughout the story, some of the more difficult ones include almost freezing to death in the forest, being seduced by Bertilak’s wife, and being offered a way out. When Sir Gawain began his journey to the Green Chapel, he wore full armor to protect himself against the wolves, bears, and giants; however, when he lay down to sleep, the cold, winter temperature was so perilous that Sir Gawain almost froze to ice inside of his armor, lying below enormous icicles that hung from the tree above him. He eventually found a resting place at Bertilak de Hautdesert’s castle, where he resided for a couple weeks.

Sir Gawain stayed happily with Bertilak and the other lords until one morning, when Bertilak’s wife attempted to seduce him. Although Sir Gawain refuses her advancement graciously, she makes two more attempts to sleep with him; she tries to flatter him, saying that she would have preferred to marry him instead of Bertilak. Sir Gawain remains honorable, choosing to turn her down continuously, but allows her to one kiss and to give him her girdle before he leaves.

When Sir Gawain leaves Bertilak’s castle, he is given a guide to help lead him part of the way. The guide brings Sir Gawain as far as he can go, but before they part ways, the guide suggests that Sir Gawain turn around and abandon his quest. The guide promises to never tell anyone of what occurred, should Sir Gawain decide to quit. Although this would have been the perfect opportunity for Sir Gawain to act on his fears and turn around, Sir Gawain steels himself to his quest and keeps going. Choosing to continue the journey, even when the road ahead seems dark and bleak, is a quality of a true hero. These courageous moments in the story show Sir Gawain’s progression as a hero in defeating every trial and tribulation he faces.

All humans have trials and tribulations no matter what time frame you are looking in. People seem to forget that this is true for heroes as well. People see heroes as all mighty and nothing can stop them, but in reality, that is not the case. Sir Gawain is thought of as perfect man who has never been defeated. This account of his life proves he is human with “his elaborate accoutrements and knightly insignia. We get all sorts of signs for Gawain’s ‘perfected public self’” (Kinney 49).

Sir Gawain has learned many lessons throughout this journey, and the Knight praises him for facing the trials and coming out victorious. Sir Gawain has learned about true chivalry, bravery, and love. He has learned that he is a true knight, but this does not mean that he is not susceptible to desires and fears; Sir Gawain is not perfect, he has flaws just like anyone else. When Sir Gawain returns home to Camelot, the kingdom is thrilled. Knowing that he was only saved by the mercy of God, Sir Gawain strives to live in the moment from that day on, to be grateful for every bit of life he has, and to never take the blessings he has for granted.

Perhaps the most identifiable quality of a heroic story is the happy ending. The hero returns home, changed for the better. This is a story that one can never forget. Sir Gawain started out somewhat full of himself, because of this he would have not been considered a hero at the beginning of the story, but towards the end the readers can see the change that was made within the character. Sir Gawain was able to see what mistakes he was making, changed it, and then started to do what a true hero is supposed to do, “goes beyond what human beings are expected to do” (McClinton-Temple).

Every hero has a different journey, but every hero’s journey follows the same outline. A true hero faces the challenge and accepts it. They will face many trials and tribulations head on, and not shy away from them. A true hero will learn lessons from their journey and use them to grow and improve, coming home changed for the better. Throughout Sir Gawain and the Green Knight, Sir Gawain follows along this same path and reaches the desired outcome. His story proves that the hero’s journey is a classic literary device that is still used and enjoyed to this day.

The Heroic Journey of Sir Gawain and the Green Knight. (2019, Apr 23). Retrieved from https://papersowl.com/examples/the-heroic-journey-of-sir-gawain-and-the-green-knight/

Gawain and the Green Knight