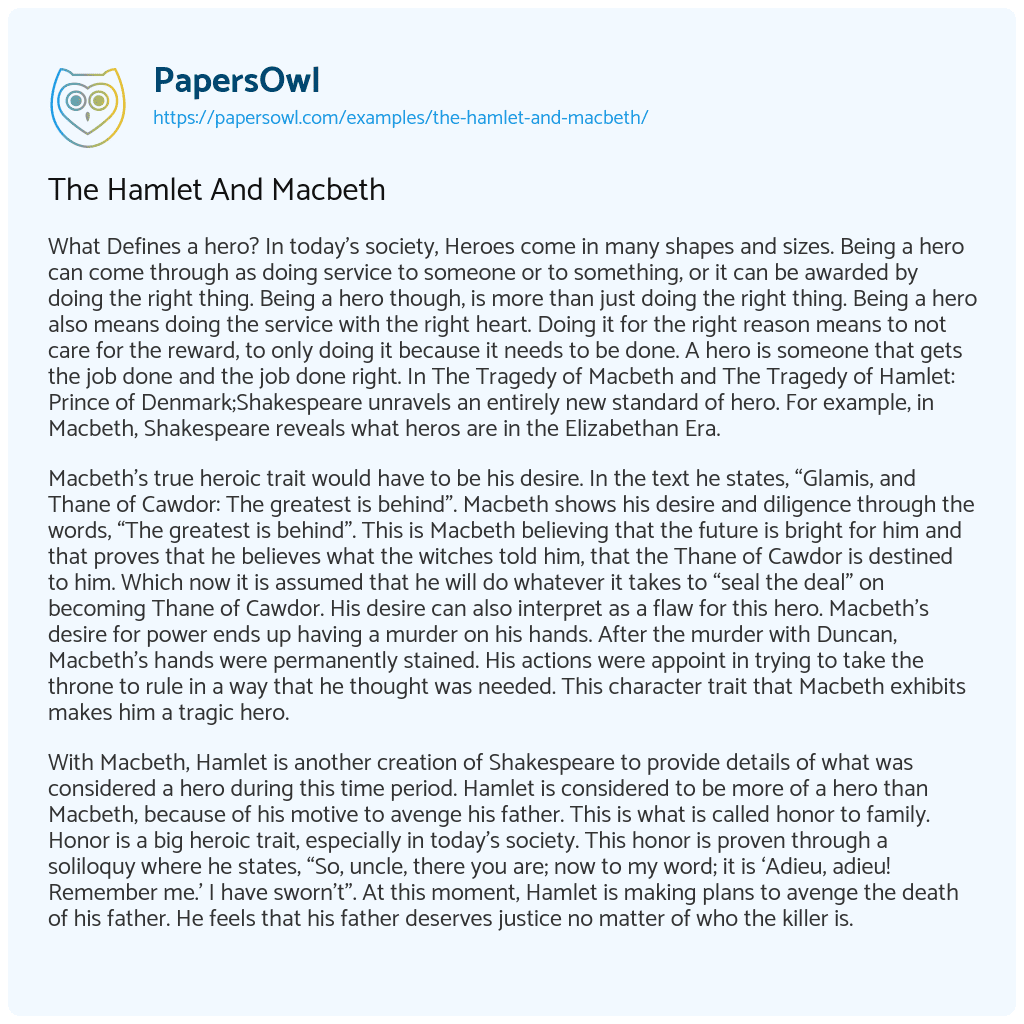 What Defines a hero? In today’s society, Heroes come in many shapes and sizes. Being a hero can come through as doing service to someone or to something, or it can be awarded by doing the right thing. Being a hero though, is more than just doing the right thing. Being a hero also means doing the service with the right heart. Doing it for the right reason means to not care for the reward, to only doing it because it needs to be done. A hero is someone that gets the job done and the job done right. In The Tragedy of Macbeth and The Tragedy of Hamlet: Prince of Denmark;Shakespeare unravels an entirely new standard of hero. For example, in Macbeth, Shakespeare reveals what heros are in the Elizabethan Era.

Macbeth’s true heroic trait would have to be his desire. In the text he states, “Glamis, and Thane of Cawdor: The greatest is behind”. Macbeth shows his desire and diligence through the words, “The greatest is behind”. This is Macbeth believing that the future is bright for him and that proves that he believes what the witches told him, that the Thane of Cawdor is destined to him. Which now it is assumed that he will do whatever it takes to “seal the deal” on becoming Thane of Cawdor. His desire can also interpret as a flaw for this hero. Macbeth’s desire for power ends up having a murder on his hands. After the murder with Duncan, Macbeth’s hands were permanently stained. His actions were appoint in trying to take the throne to rule in a way that he thought was needed. This character trait that Macbeth exhibits makes him a tragic hero.

With Macbeth, Hamlet is another creation of Shakespeare to provide details of what was considered a hero during this time period. Hamlet is considered to be more of a hero than Macbeth, because of his motive to avenge his father. This is what is called honor to family. Honor is a big heroic trait, especially in today’s society. This honor is proven through a soliloquy where he states, “So, uncle, there you are; now to my word; it is ‘Adieu, adieu! Remember me.’ I have sworn’t”. At this moment, Hamlet is making plans to avenge the death of his father. He feels that his father deserves justice no matter of who the killer is.

The Hamlet And Macbeth. (2022, Apr 10). Retrieved from https://papersowl.com/examples/the-hamlet-and-macbeth/

What where Macbeth’s Motives

The Tragedy of MacBeth

Macbeth Downfall in the Context of Violence