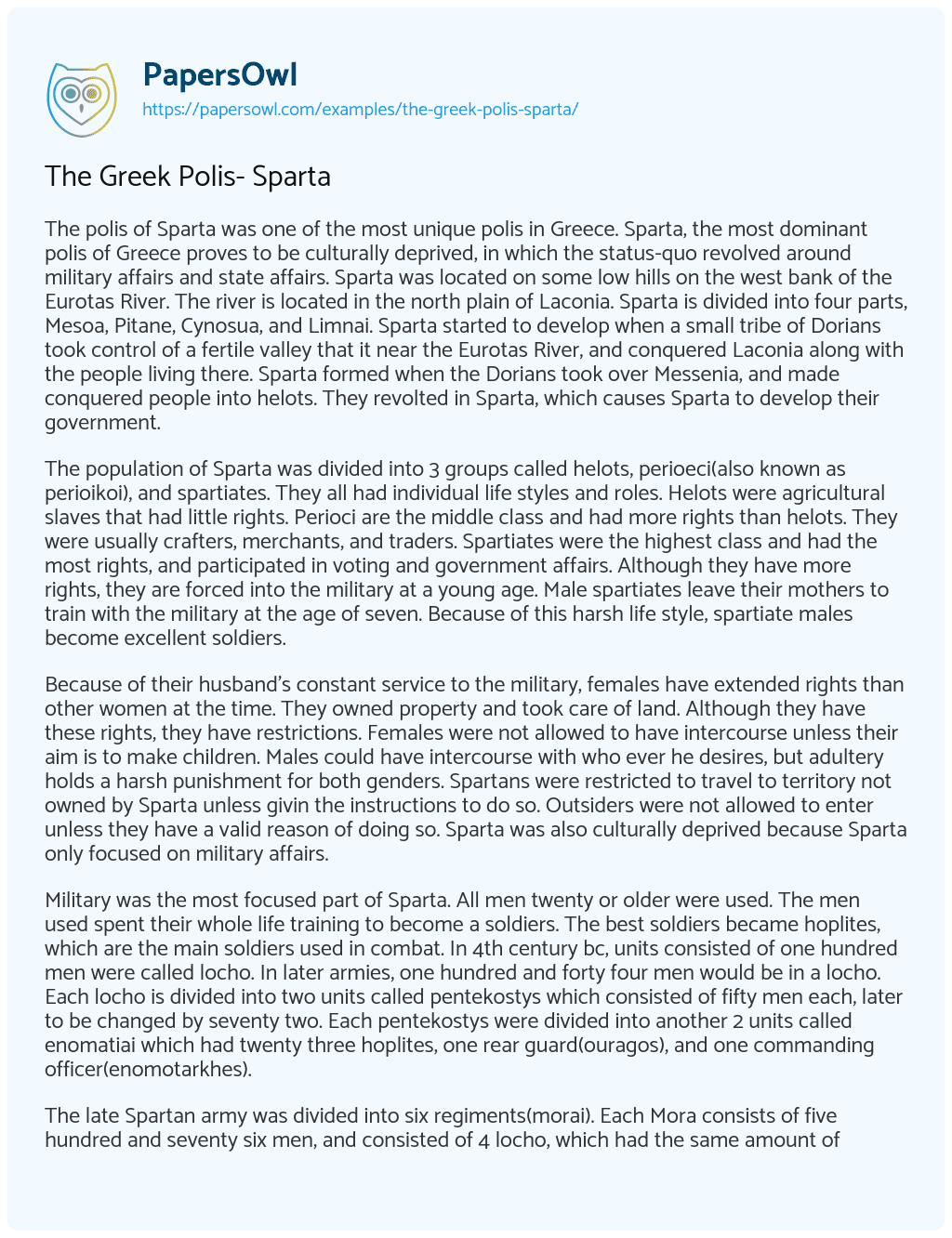 The polis of Sparta was one of the most unique polis in Greece. Sparta, the most dominant polis of Greece proves to be culturally deprived, in which the status-quo revolved around military affairs and state affairs. Sparta was located on some low hills on the west bank of the Eurotas River. The river is located in the north plain of Laconia. Sparta is divided into four parts, Mesoa, Pitane, Cynosua, and Limnai. Sparta started to develop when a small tribe of Dorians took control of a fertile valley that it near the Eurotas River, and conquered Laconia along with the people living there. Sparta formed when the Dorians took over Messenia, and made conquered people into helots. They revolted in Sparta, which causes Sparta to develop their government.

The population of Sparta was divided into 3 groups called helots, perioeci(also known as perioikoi), and spartiates. They all had individual life styles and roles. Helots were agricultural slaves that had little rights. Perioci are the middle class and had more rights than helots. They were usually crafters, merchants, and traders. Spartiates were the highest class and had the most rights, and participated in voting and government affairs. Although they have more rights, they are forced into the military at a young age. Male spartiates leave their mothers to train with the military at the age of seven. Because of this harsh life style, spartiate males become excellent soldiers.

Because of their husband’s constant service to the military, females have extended rights than other women at the time. They owned property and took care of land. Although they have these rights, they have restrictions. Females were not allowed to have intercourse unless their aim is to make children. Males could have intercourse with who ever he desires, but adultery holds a harsh punishment for both genders. Spartans were restricted to travel to territory not owned by Sparta unless givin the instructions to do so. Outsiders were not allowed to enter unless they have a valid reason of doing so. Sparta was also culturally deprived because Sparta only focused on military affairs.

Military was the most focused part of Sparta. All men twenty or older were used. The men used spent their whole life training to become a soldiers. The best soldiers became hoplites, which are the main soldiers used in combat. In 4th century bc, units consisted of one hundred men were called locho. In later armies, one hundred and forty four men would be in a locho. Each locho is divided into two units called pentekostys which consisted of fifty men each, later to be changed by seventy two. Each pentekostys were divided into another 2 units called enomatiai which had twenty three hoplites, one rear guard(ouragos), and one commanding officer(enomotarkhes).

The late Spartan army was divided into six regiments(morai). Each Mora consists of five hundred and seventy six men, and consisted of 4 locho, which had the same amount of men in the early armies. Morai were commanded by polemarchs. Each military formation were led by a king, which had three hundred men as a bodyguard. All armies in Ancient Greece used the phalanx formation in combat, which is the act of hoplites staying together and overlapping shields to create a large defensive wall.

The hoplites used bronze muscled breast plates as armor, along with greaves, shin armor and cheek plated helmets. They used large heavy shields called hoplons(called a dispus when worn), which are made from bronze and wood. Hoplites must return home with the shield or they will face persecution or banishment from Sparta due to its price and regular inheritance from parents to child.

As a main weapon hoplites used spears called dorus. They were 7-9 feet long and had a leaf shaped plade as a spear tip and a spike at the other end. As a secondary weapon spartans used xiphos, which are greek blades used throughout Ancient Greece. They were typically 2 feet, but the Spartan versions were smaller ranging one to one and a half feet in length. As an alternatative, Spartans were issued a small heavy sword use for hacking called a kopis.

The Spartan military has many great achievements and accomplishments in their lifetime. Their excellent military forces were the greatest at the time and very brave. They proved its bravery in the battle of Thermopylae. At the battle of Thermopylae in 480 B.C., three hundred of Kind Leonidas’s body guard along with 700 Thespians guarded the small mountain pass at Thermopylae against the opposing persian forces, which consisted of 2,641,610 men.

Although the outcome of this battle is predictabable, the Spartans did their best to delay the inevitable, thus proving their bravery at the battle of Thermopylae. Another spartan accomplishment is defeating Athens in the Peloponnesian war. Persia, Sparta and other Greek polises fought against Athens, the dominant and most influential polis at the time. The catalyst of the war is the cancellation of the Delian League alliance because of Athens act of rebuilding walls after the Persian’s escape.

Shortly after, Sparta allied with Corinth, Thebes, and other members of the Peloponnesian confedaracy to go to war against Athens. The geography gives Sparta the advantage because it gives Sparta the oppurtunity to use its land units to attack Athens. Sparta demands Athens to surrender, and Athens accepts. Corinth and Thebes want the annihilation of Athens. Sparta destroys Athens to please its allies.

Sparta had one of the most complex government at that time. At the highest point in the government was 2 monarchs(kings) ruled. Below the kings is the council, which consists of 2 more kings and 28 nobles. The nobles are over 60 years of age and have retired from military service. The council is a the supreme criminal court, and also sets up foreign policy and a legeslative. Another branch of government is an assembly of men that consisted of spartiates, which had the power to select the council and approve/veto council proposals.

Above them was a group of 5 men called ephorates, that led the council, ran education system and the military. They were also in charge of disposing erroneous infants and vetoing actions led by assembly or the council. With divine proof, the ephorates could even ban kings from the throne. Due to this complex government structure, the government was able to maintain the stability of Sparta, and even have the most stable government in all of Ancient Greece.

Sparta’s fierce reputation in the Greek world grew ever since the Dorian conquests. Spartas effective army demonstrates its dominance in accomplishments, such as the annihilation of Athens which is the most influential city state at that time and the Battle of Thermopylae to prove its bravery against a more powerful opponent. Although Sparta’s self sufficient economy is not as efficient as others in the area, Sparta’s government was the most stable and effective in the world at that time. Because of Sparta’s superior military and government, and conquests, Sparta proves to be dominant polis in Greece.