The Effects of Hypermasculinity in Society 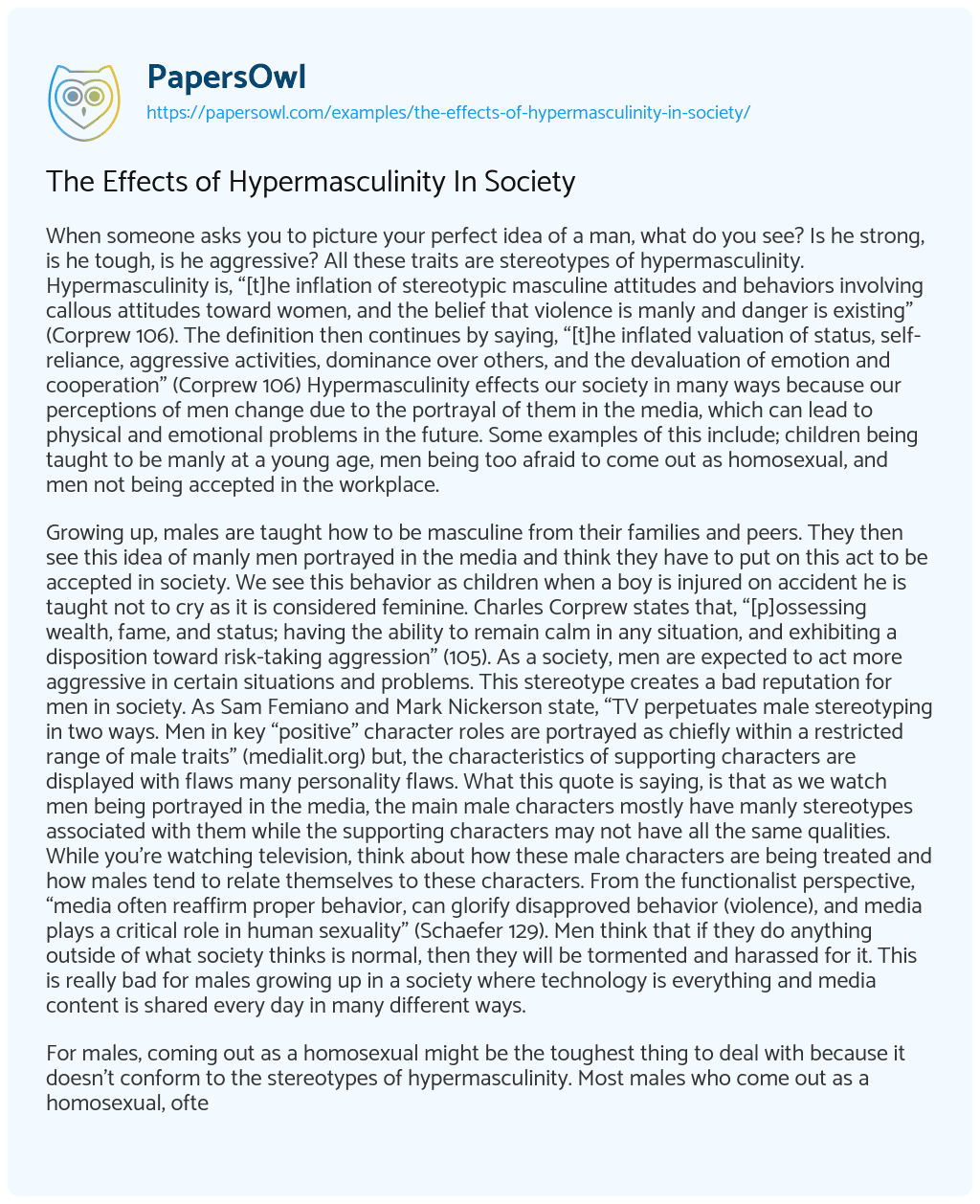 When someone asks you to picture your perfect idea of a man, what do you see? Is he strong, is he tough, is he aggressive? All these traits are stereotypes of hypermasculinity. Hypermasculinity is, “[t]he inflation of stereotypic masculine attitudes and behaviors involving callous attitudes toward women, and the belief that violence is manly and danger is existing” (Corprew 106). The definition then continues by saying, “[t]he inflated valuation of status, self-reliance, aggressive activities, dominance over others, and the devaluation of emotion and cooperation” (Corprew 106) Hypermasculinity effects our society in many ways because our perceptions of men change due to the portrayal of them in the media, which can lead to physical and emotional problems in the future. Some examples of this include; children being taught to be manly at a young age, men being too afraid to come out as homosexual, and men not being accepted in the workplace.

Growing up, males are taught how to be masculine from their families and peers. They then see this idea of manly men portrayed in the media and think they have to put on this act to be accepted in society. We see this behavior as children when a boy is injured on accident he is taught not to cry as it is considered feminine. Charles Corprew states that, “[p]ossessing wealth, fame, and status; having the ability to remain calm in any situation, and exhibiting a disposition toward risk-taking aggression” (105). As a society, men are expected to act more aggressive in certain situations and problems. This stereotype creates a bad reputation for men in society. As Sam Femiano and Mark Nickerson state, “TV perpetuates male stereotyping in two ways. Men in key “positive” character roles are portrayed as chiefly within a restricted range of male traits” (medialit.org) but, the characteristics of supporting characters are displayed with flaws many personality flaws. What this quote is saying, is that as we watch men being portrayed in the media, the main male characters mostly have manly stereotypes associated with them while the supporting characters may not have all the same qualities. While you’re watching television, think about how these male characters are being treated and how males tend to relate themselves to these characters. From the functionalist perspective, “media often reaffirm proper behavior, can glorify disapproved behavior (violence), and media plays a critical role in human sexuality” (Schaefer 129). Men think that if they do anything outside of what society thinks is normal, then they will be tormented and harassed for it. This is really bad for males growing up in a society where technology is everything and media content is shared every day in many different ways.

For males, coming out as a homosexual might be the toughest thing to deal with because it doesn’t conform to the stereotypes of hypermasculinity. Most males who come out as a homosexual, often end up getting bullied and harassed by their peers. Also, gay marriage isn’t legal in most places, which shows that it is still not accepted. As a whole, society needs to be more accepting of these things, so males can feel relieved after telling people they are homosexual. Queer theorists have been studying the media and homosexuality, “They have analyzed the frequent invisibility of homosexual characters, as well as the problematic ways in which they are made visible” (Schaefer 129). “The Minority Stress Model proposes that gay men are at an increased likelihood to have mental health symptoms if they experience a gay related stressor,” these stressors include, “[i]nternalized homophobia, stigma, and prejudice” (Fischgrund 124). This model shows the stressors of men being gay in a hypermasculine society. Men who are homosexual chose to hide their feelings because they are afraid of what will happen afterwards. Will their friends and family stop talking to them? Will they lose out on a job?

All of these questions are the fears that men have. Coming out at work is also one of the hardest things to do because you don’t know how your co-workers will react. Most homosexual employees are too afraid to come out at their jobs because they are afraid of the backlash that comes with it. Men usually put on a front in the workplace to hide the fact that they are homosexual. As stated in the CNN Article, “It took all the courage I had to come out and be like ‘This is something I’m doing, I can’t pretend to be someone I’m not at work anymore” and, “[f]rom that point on, I was like ‘Please help me” (CNNMoney). This is an example of a male coming out to one of his coworkers in his office at work. This is a huge deal because people may not be very accepting, which is why people have trouble feeling comfortable coming out at work. The next big part of hypermasculinity that I am going to discuss is the effects it has on males as a whole in society.

Hypermasculinity has many negative effects on males. These effects take many consequences on the health of males. The CDC made a list of the leading cause of death for males in 2014. As Kristian Berhost states in her article, “Some of the CDC’s leading causes of death for men are behavioral such as unintentional injuries, suicide, chronic liver disease and fall within the scope of toxic masculinity” (Berhost Medium.com). Males tend to have a shorter life expectancy then women due to the fact of these factors with stereotypes relating to hypermasculinity. This high rate of death among males is caused by many things such as: alcoholism, gun homicide victims, and gun suicide victims. Another reason as to why their life expectancy rate is lower is because they refuse to seek mental health treatment because they are afraid they will be viewed as weak. “Men of all ages and ethnicities are thirty-three percent less likely than women to seek mental health treatment for depression, substance abuse, and stressful life events even though they experience these problems at the same rate or greater rate than women” (Kristian Medium.com). Men who refuse to get help end up damaging their physical and mental health. As stated by Medium.com, “If we combined men’s total alcohol-related deaths per year, illegal drug use deaths per year, gun homicides per year, and gun suicides per year, we find that 131,224 men died from toxic masculine behaviors in 2014” (Berhost Medium.com). This is an unsafe number of males dying from the effects of hypermasculinity.

Society as a whole needs to be more accepting towards men expressing their weaker sides. Growing up males are taught how to act a certain way, in order to be accepted. This portrayal of men in the media makes it hard for men to confront their emotions and feelings. Men should be able to express themselves freely and not feel ashamed of who they are because of the stereotypes in our society.

The Effects of Hypermasculinity In Society. (2021, Apr 27). Retrieved from https://papersowl.com/examples/the-effects-of-hypermasculinity-in-society/

Stereotyping Males in the Classroom

Childhood Effects on Society in Sons and Lovers

Bullying and its Effects in Public School