The American Dream is Dead 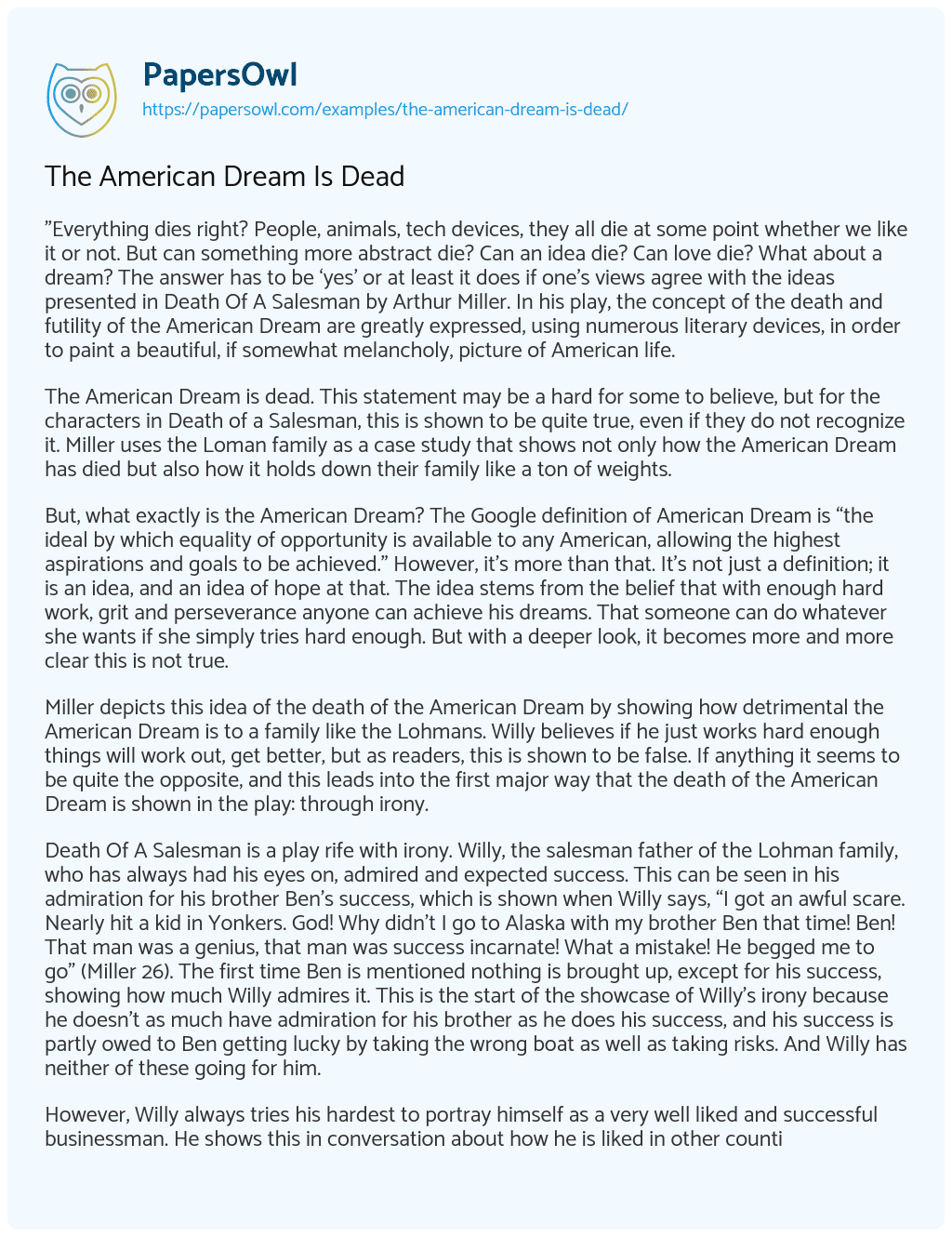 “Everything dies right? People, animals, tech devices, they all die at some point whether we like it or not. But can something more abstract die? Can an idea die? Can love die? What about a dream? The answer has to be ‘yes’ or at least it does if one’s views agree with the ideas presented in Death Of A Salesman by Arthur Miller. In his play, the concept of the death and futility of the American Dream are greatly expressed, using numerous literary devices, in order to paint a beautiful, if somewhat melancholy, picture of American life.

The American Dream is dead. This statement may be a hard for some to believe, but for the characters in Death of a Salesman, this is shown to be quite true, even if they do not recognize it. Miller uses the Loman family as a case study that shows not only how the American Dream has died but also how it holds down their family like a ton of weights.

But, what exactly is the American Dream? The Google definition of American Dream is “the ideal by which equality of opportunity is available to any American, allowing the highest aspirations and goals to be achieved.” However, it’s more than that. It’s not just a definition; it is an idea, and an idea of hope at that. The idea stems from the belief that with enough hard work, grit and perseverance anyone can achieve his dreams. That someone can do whatever she wants if she simply tries hard enough. But with a deeper look, it becomes more and more clear this is not true.

Death Of A Salesman is a play rife with irony. Willy, the salesman father of the Lohman family, who has always had his eyes on, admired and expected success. This can be seen in his admiration for his brother Ben’s success, which is shown when Willy says, “I got an awful scare. Nearly hit a kid in Yonkers. God! Why didn’t I go to Alaska with my brother Ben that time! Ben! That man was a genius, that man was success incarnate! What a mistake! He begged me to go” (Miller 26). The first time Ben is mentioned nothing is brought up, except for his success, showing how much Willy admires it. This is the start of the showcase of Willy’s irony because he doesn’t as much have admiration for his brother as he does his success, and his success is partly owed to Ben getting lucky by taking the wrong boat as well as taking risks. And Willy has neither of these going for him.

However, Willy always tries his hardest to portray himself as a very well liked and successful businessman. He shows this in conversation about how he is liked in other counties, how police treat his car like their own and how he will try to inflate his sales to Linda just to keep up this image of being successful and living the American Dream. Yet beyond these examples, Willy acknowledges he needs this approval for himself when he is talking to Charley and says, “I’ve always tried to think otherwise, I guess. I always felt that if a man was impressive, and well liked, that nothing…” (Miller 76). This shows that this idea deeply plagues him and that he is troubled by it. He bringing it up at one of his lowest moments, during his argument with Charley, but he has to cut himself off because he struggles to admit to himself that this ideology is flawed and the way he lived his life was wrong.

The irony really comes into play once it is shown that Willy does not really practice what he preaches. He pretends he is the hardest worker to everyone else, yet the reality of the situation is that after a while, rather than focusing on work and his family, he ends up fooling around with women while on his “business trips.” Even though he should be fully aware he isn’t really working as hard as he claims, it seems as though he buys into his own lies and still expects the pay off from the hard work he isn’t doing. This creates a great sense of irony by showcasing the fact that he expects the reward for what he isn’t doing, yet he is upset when he doesn’t get it, and he can’t see that he isn’t putting in the same hard work that he used to, but the reader can.

The irony of Willy’s “hard-work” is really shown because regardless of how hard he has worked throughout his life, in the end of, he is depressed, broke (taking loans from his only friend) and disregarded by his old employers. All of this leads to Willy being unable to bring himself to go on working any further. And in the very end, with all his work to be well liked, he ends up not even liking himself, feeling he’s better dead than alive, because he is worth more, and having only his family and closest friend at his funeral. Thus creating a very nice sense of irony when it comes to Willy and his American Dream.

Besides irony, throughout Death of a Salesman Miller does a very good job of cramming as much symbolism as he can into its pages. A great example of this is in the title itself. When Willy dies, it is not just Willy dying but the American Dream as well. And even further beyond that, Willy does not just die, he kills himself by crashing his car at the end of the play This can be taken in two ways. One, like Willy, the American Dream killed itself by sort of self-destructing just as Willy does by once again crashing his car. Two, the American Dream is more of a burden than anything leading to a burdensome life for those who buy into it, causing their eventual downfall just like Willy.

Shown through what are hinted to be Willy’s depressive and suicidal tendencies brought about due to his work and lifestyle, a good example of this is shown at the very beginning of the play when Willy says,

I was driving along, you understand? And I was fine. I was even observing the scenery. You can imagine, me looking at scenery, on the road every week of my life. But it’s so beautiful up there, Linda, the trees are so thick, and the sun is warm. I opened the windshield and just let the warm air bathe over me. And then all of a sudden I’m goin’ off the road! I’m tellin’ya, I absolutely forgot I was driving. If I’d’ve gone the other way over the white line I might’ve killed somebody. So I went on again — and five minutes later I’m dreamin’ again, and I nearly…I have such thoughts, I have such strange thoughts. (Miller 5).

When mentioning how he keeps having “such strange thoughts” this suggests either his depressed or suicidal thoughts. When it is initially presented, it can be easily missed or skimmed over, but upon closer inspection, it is a clear foreshadowing of what is to come. That it may be possible that Willy/The American Dream is going to self-destruct and die, which is later confirmed first by the discovery of his tube hooked up to an exhaust vent and last when he finally goes through with the act at the end of the show.

Then, to continue with Miller’s use of symbolism and the correlation between the American Dream and Willy, one can look at Willy’s memories and how they make his life seem as though it was better for him in the past. Being realistic, however, shows life has never really been that great with him leading a life of hard work yet constantly drawing the short straw. With his brother ending up hitting the lottery while Willy is stuck working himself into a depressed state his whole life just to maintain the illusion of success. The connection can be seen when one realizes the American Dream is the same way today, for it is romanticized and made to seem that it used to be so amazing. Let’s “Make America Great Again.” Many feel we have just left the good old days, even though realistically, life in America was never that great as far as the American Dream goes.

American history is full of hard working people being put down and living extremely difficult lives with very little pay off such as the Irish, Chinese and African Americans in the early days of America. This idea is shown really well in real life when Chinese and Irish immigrants moved to America for a better life, yet most of them ended up being discriminated against with places having signs of “Irish need not apply,” and due to the time period, many of them ended up slaving away by working themselves to death on the railroads, yet not making enough money to really do much other than survive and keep their families fed. That doesn’t really sound like The American Dream now does it? Of course, not because it was a flawed idea from the start, and this concept was carried over into Willy’s life and outlook.

In the end of Death Of A Salesman, the conclusion to draw is clear. The American Dream is dead just like Willy Lohman. Also, like Willy Lohman, it became so flawed and deluded that it destroyed itself. There were no “Good Ol Days.” Yes, sometimes a person can be like Ben and hit the jackpot, but at other times, they could end up like Willy, self-deluded and caught up in the false idea of the American Dream, doomed to live out their lives as slaves to it rather than moving forward. Life isn’t fair; life is cruel and harsh and it doesn’t just give us what we want. The American Dream is dead, and so is Willy.”

The American Dream Is Dead. (2021, Jun 16). Retrieved from https://papersowl.com/examples/the-american-dream-is-dead/