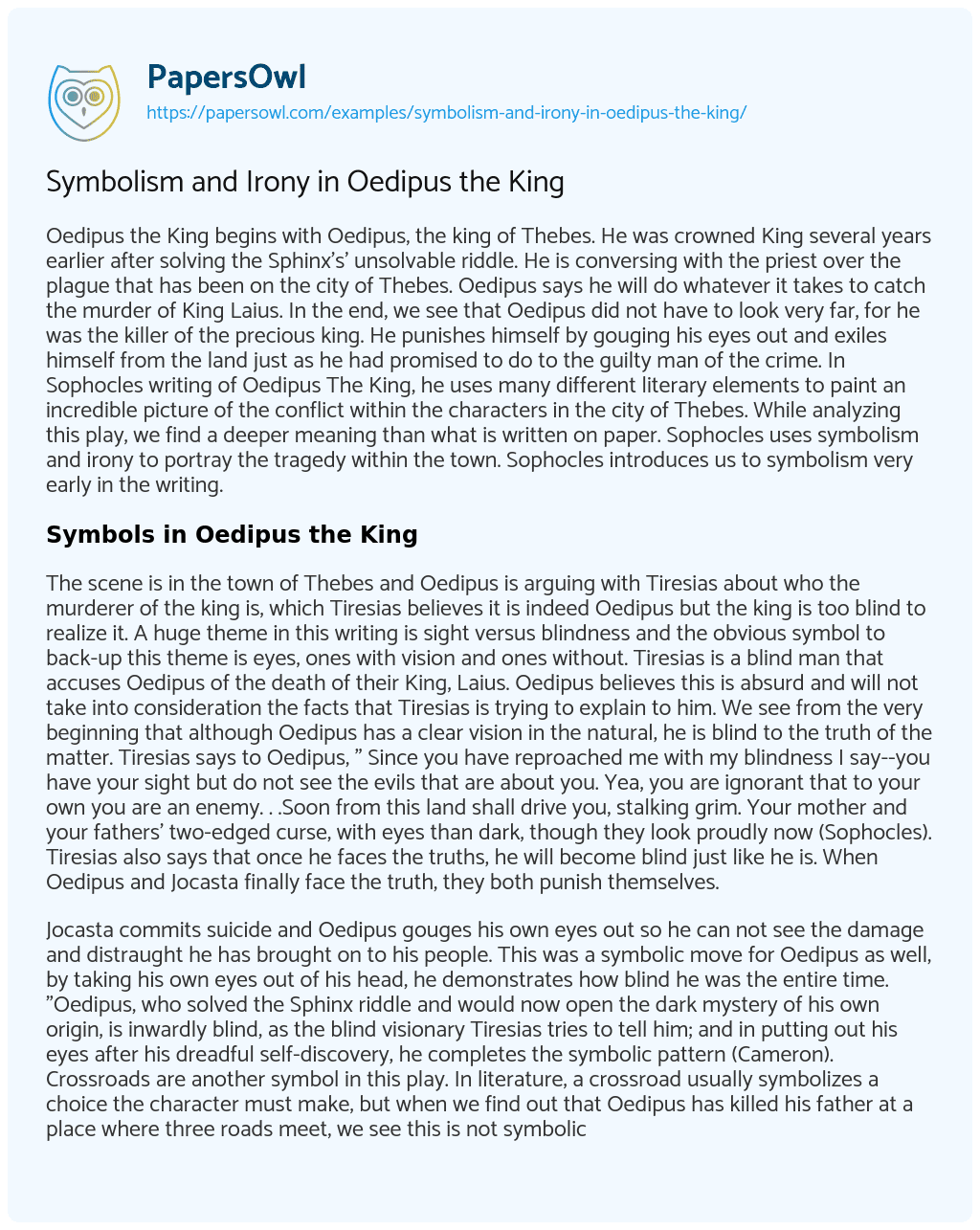 Oedipus the King begins with Oedipus, the king of Thebes. He was crowned King several years earlier after solving the Sphinx’s’ unsolvable riddle. He is conversing with the priest over the plague that has been on the city of Thebes. Oedipus says he will do whatever it takes to catch the murder of King Laius. In the end, we see that Oedipus did not have to look very far, for he was the killer of the precious king. He punishes himself by gouging his eyes out and exiles himself from the land just as he had promised to do to the guilty man of the crime. In Sophocles writing of Oedipus The King, he uses many different literary elements to paint an incredible picture of the conflict within the characters in the city of Thebes. While analyzing this play, we find a deeper meaning than what is written on paper. Sophocles uses symbolism and irony to portray the tragedy within the town. Sophocles introduces us to symbolism very early in the writing.

Symbols in Oedipus the King

The scene is in the town of Thebes and Oedipus is arguing with Tiresias about who the murderer of the king is, which Tiresias believes it is indeed Oedipus but the king is too blind to realize it. A huge theme in this writing is sight versus blindness and the obvious symbol to back-up this theme is eyes, ones with vision and ones without. Tiresias is a blind man that accuses Oedipus of the death of their King, Laius. Oedipus believes this is absurd and will not take into consideration the facts that Tiresias is trying to explain to him. We see from the very beginning that although Oedipus has a clear vision in the natural, he is blind to the truth of the matter. Tiresias says to Oedipus, ” Since you have reproached me with my blindness I say–you have your sight but do not see the evils that are about you. Yea, you are ignorant that to your own you are an enemy. . .Soon from this land shall drive you, stalking grim. Your mother and your fathers’ two-edged curse, with eyes than dark, though they look proudly now (Sophocles). Tiresias also says that once he faces the truths, he will become blind just like he is. When Oedipus and Jocasta finally face the truth, they both punish themselves.

Jocasta commits suicide and Oedipus gouges his own eyes out so he can not see the damage and distraught he has brought on to his people. This was a symbolic move for Oedipus as well, by taking his own eyes out of his head, he demonstrates how blind he was the entire time. “Oedipus, who solved the Sphinx riddle and would now open the dark mystery of his own origin, is inwardly blind, as the blind visionary Tiresias tries to tell him; and in putting out his eyes after his dreadful self-discovery, he completes the symbolic pattern (Cameron). Crossroads are another symbol in this play. In literature, a crossroad usually symbolizes a choice the character must make, but when we find out that Oedipus has killed his father at a place where three roads meet, we see this is not symbolic for the choice that Oedipus had, but the fact of his fate. At the crossroads where Daulia, Delphi, and Thebes meet, Oedipus kills, in self-defense, a man who he later learns was his father. The converging of the roads echoes the intertwining threads of Oedipus’s fate. This was a decision that would affect the rest of Oedipus’ life, even though he did not know the consequences of his actions at the time. The last symbol that the reader might find in the writing was Oedipus’ swollen feet. When Oedipus was born, his parents abandoned him so he could try to run from his fate. Oedipus was rescued by a messenger and taken to the next town where he would become the King. He was left with scars on his feet from the ropes.

Literary Elements in Oedipus the King

The scars represent that Oedipus could run away for a small-time, but ultimately, he could not escape his fate. In reality, he was the son of Laius and Jocasta, as a baby left outside to die but found by shepherds and taken to be raised by Corinth’s king and queen (Nardo). The author, Sophocles, also incorporates different types of irony into the writing of this Greek tragedy. Oedipus makes it very clear that he would do whatever it took to avenge the murder of King Laius. The first example of dramatic irony we see is when Oedipus states, “‘Whoe’er he be, I order, that all men from their houses banish him; since it is he contaminates us all (Sophocles). This is ironic because as the reader we know that Oedipus is guilty, but he himself is the one that should be banished but he is clueless along with everyone else in the town, although the reader does know this. This can also be known as verbal irony.

As Oedipus continues to threaten Laius’ killer, he does not realize he will be punishing himself. We see this irony clearly in an exchange between Creon and Oedipus. Kreon: “Avenge the murder of Laius. Whoever they are Oedipus: “But where are his murderers? The crime is old. How will we find their tracks? The killers could be anywhere (Sophocles). The tragic irony is also present in the play. Oedipus is taken away from his home so his fate will not be accomplished, but when he grows older and receives a prophecy of his own, he runs from what he was pushed towards to protect him. Oedipus fulfills his fate by killing his father and having four children with his mother. Incest is one of the worst crimes to commit during this time and this was what brought the plague onto the city. “The contrasting word Xenos (alien) is first used by Oedipus with unconscious irony when, in explaining why he did not know the details of King Laius’ murder he says, ‘I am just an alien here.’ The irony is a double one: he is not an alien in the way he thinks since he is actually the son of the Theban royal house; but he is presently to be an alien in a more terrible sense, namely an exile (Cameron). As Sophocles uses these different elements to portray a bigger picture than just a plagued town with an accused king, we see the underlying literary devices used to make this work more than what meets the eye. Sophocles uses symbolism to portray the tragedy within the city.

Symbolism and Irony in Oedipus the King. (2019, Oct 25). Retrieved from https://papersowl.com/examples/symbolism-and-irony-in-oedipus-the-king/

Oedipus the King by Sophocles

Oedipus: the King of Thebes