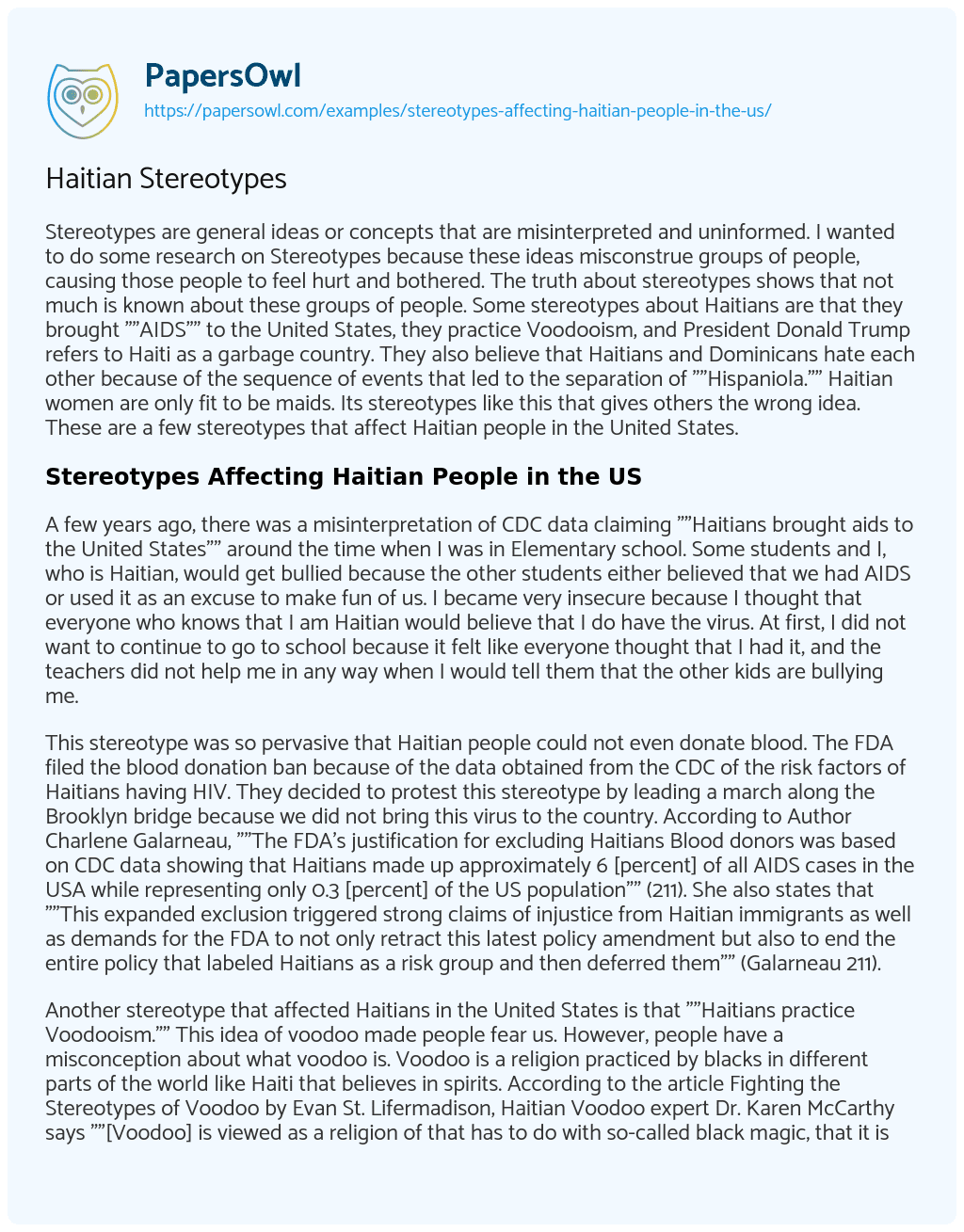 Stereotypes are general ideas or concepts that are misinterpreted and uninformed. I wanted to do some research on Stereotypes because these ideas misconstrue groups of people, causing those people to feel hurt and bothered. The truth about stereotypes shows that not much is known about these groups of people. Some stereotypes about Haitians are that they brought “”AIDS”” to the United States, they practice Voodooism, and President Donald Trump refers to Haiti as a garbage country. They also believe that Haitians and Dominicans hate each other because of the sequence of events that led to the separation of “”Hispaniola.”” Haitian women are only fit to be maids. Its stereotypes like this that gives others the wrong idea. These are a few stereotypes that affect Haitian people in the United States.

Stereotypes Affecting Haitian People in the US

A few years ago, there was a misinterpretation of CDC data claiming “”Haitians brought aids to the United States”” around the time when I was in Elementary school. Some students and I, who is Haitian, would get bullied because the other students either believed that we had AIDS or used it as an excuse to make fun of us. I became very insecure because I thought that everyone who knows that I am Haitian would believe that I do have the virus. At first, I did not want to continue to go to school because it felt like everyone thought that I had it, and the teachers did not help me in any way when I would tell them that the other kids are bullying me.

This stereotype was so pervasive that Haitian people could not even donate blood. The FDA filed the blood donation ban because of the data obtained from the CDC of the risk factors of Haitians having HIV. They decided to protest this stereotype by leading a march along the Brooklyn bridge because we did not bring this virus to the country. According to Author Charlene Galarneau, “”The FDA’s justification for excluding Haitians Blood donors was based on CDC data showing that Haitians made up approximately 6 [percent] of all AIDS cases in the USA while representing only 0.3 [percent] of the US population”” (211). She also states that “”This expanded exclusion triggered strong claims of injustice from Haitian immigrants as well as demands for the FDA to not only retract this latest policy amendment but also to end the entire policy that labeled Haitians as a risk group and then deferred them”” (Galarneau 211).

Another stereotype that affected Haitians in the United States is that “”Haitians practice Voodooism.”” This idea of voodoo made people fear us. However, people have a misconception about what voodoo is. Voodoo is a religion practiced by blacks in different parts of the world like Haiti that believes in spirits. According to the article Fighting the Stereotypes of Voodoo by Evan St. Lifermadison, Haitian Voodoo expert Dr. Karen McCarthy says “”[Voodoo] is viewed as a religion of that has to do with so-called black magic, that it is destructive, that it is connected with zombies and poisoning”” (NJ3).

Although they do call upon supernatural spirits during their rituals, it does not mean that all Haitians practice it and that we just walk around hurting people. She also states that “”There is a racist mentality about [V]oodoo, which is the main reason why it is virtually impossible to change people’s ideas about [V]oodoo”” (St. Lifermadison NJ3). The majority of the Haitian population do not practice Voodoo, most of them are Catholics and Christians. Also, people believe that Haitians did voodoo to get freedom. The history behind it is that slave owners were getting sick and dying off and nobody knew why. People just assumed it was because of Voodoo. In reality, Haitians were poisoning their slave masters’ food. The actual idea helped because it made the slave owners free us.

President Donald Trump recently said that “”Haiti is a garbage country.”” However, Haiti is a country of beautiful beaches and people who work together to keep the island intact. According to author Frances Maclean, “”The name Haiti is an Indian word meaning “”land of mountains”” (4). Haiti is just poor, and most Haitians are in poverty. But the people in Haiti are hard workers and have beautiful souls because providing education and jobs in poverty is difficult to do and Haitians still find a way to manage.

Haiti is the first country that fought for independence from being enslaved by the French. Some parts of Haiti like “”Cite Soleil”” are dangerous or corrupt due to poor security and poor gun control, but the United States has the same flaws in different areas like in Chicago where people are dying every day because of poor gun control. Haiti is not a dirty country, there are just some places that have poor conditions because of broken infrastructure from the earthquake leaving Haitians homeless. Poor conditions like the United States implementing embargos on Haiti due to being in diplomatic isolation. That made it easy to take control of Haiti. Haiti Economy is underdeveloped due to struggles with electricity, growing population, and degrading environments.

People think that “”Haitians and Dominicans hate each other”” because they are separated in one island. They both inhibit the island, and each nationality has their differences. Even though we share the island, there is a border between us because since Haiti has been underdeveloped and the Dominican Republic has more resources and opportunities, it causes heavy migration affecting the Dominican economy. This is also due to cultural factors like language barriers. We are all the same people influenced by the French and the Spaniards. It was a big problem in the past when the Dominicans led the parsley massacre as a genocide of Haitians by Rafael Trujillo. The reason Trujillo led the genocide of Haitians is that Haitians were supposedly stealing crops and cows. He also saw the uncontrolled borderlands as a threat to his regime. According to author Eric Paul Roorda, “”Trujillo violently achieved his “”ruthless demographic policy,”” inviting war with Haiti and disdaining the Good Neighbor policy, and in turn, was praised by Roosevelt for his neighborly spirit and loaned a team of immigration experts”” (318).

Another stereotype is that Haitians do not look like Haitians because they are not dark skinned.”” Haitians come in all kinds of skin color, shapes and sizes just like every other nationality. This idea comes from the fact that we resemble Africans and that they are also dark skinned too. This is not true. Also, they say that “”Haitian women only cook and clean.”” In other words, Haitian women are only fit to be maids. Although some women in Haiti are maids because of the lack of opportunities that they have since Haiti is a third world country, some Haitian women are tailors, designers, lawyers, nurses or doctors. My aunt is a lawyer in Haiti and creates opportunities for her children to give them unlimited options.

These are a few stereotypes about Haitians that I picked to focus my research on and the way it affects them. Because stereotypes are misleading and cause a lot of damages to the group of people they describe, we need to call them out and change the negative views that we often have about other people in our community.

Analogy of the History of Merengue and the Island of Hispaniola