Starr Carter and the Book the Hate U Give 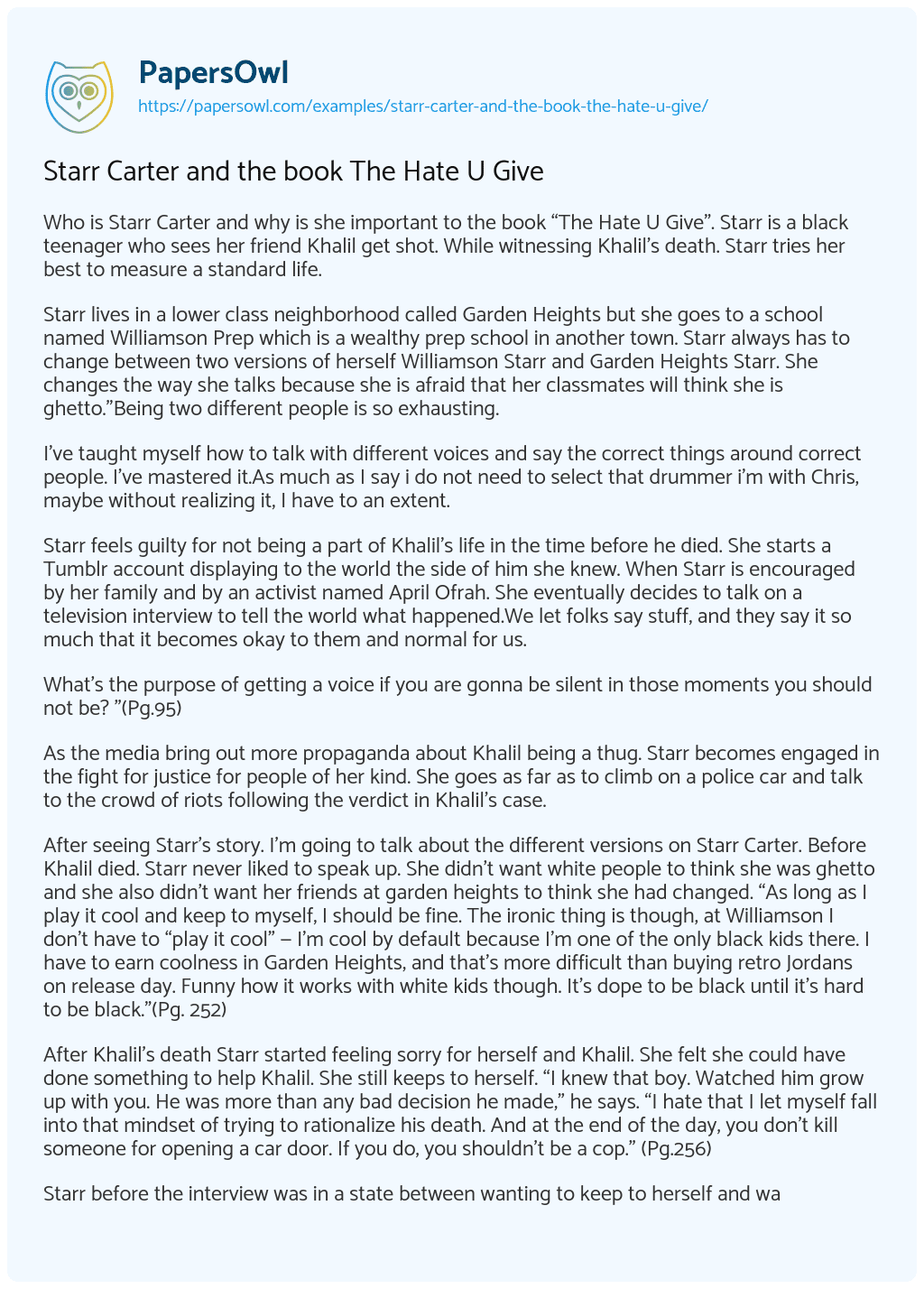 Who is Starr Carter and why is she important to the book “The Hate U Give”. Starr is a black teenager who sees her friend Khalil get shot. While witnessing Khalil’s death. Starr tries her best to measure a standard life.

Starr lives in a lower class neighborhood called Garden Heights but she goes to a school named Williamson Prep which is a wealthy prep school in another town. Starr always has to change between two versions of herself Williamson Starr and Garden Heights Starr. She changes the way she talks because she is afraid that her classmates will think she is ghetto.”Being two different people is so exhausting.

I’ve taught myself how to talk with different voices and say the correct things around correct people. I’ve mastered it.As much as I say i do not need to select that drummer i’m with Chris, maybe without realizing it, I have to an extent.

Starr feels guilty for not being a part of Khalil’s life in the time before he died. She starts a Tumblr account displaying to the world the side of him she knew. When Starr is encouraged by her family and by an activist named April Ofrah. She eventually decides to talk on a television interview to tell the world what happened.We let folks say stuff, and they say it so much that it becomes okay to them and normal for us.

What’s the purpose of getting a voice if you are gonna be silent in those moments you should not be? ”(Pg.95)

As the media bring out more propaganda about Khalil being a thug. Starr becomes engaged in the fight for justice for people of her kind. She goes as far as to climb on a police car and talk to the crowd of riots following the verdict in Khalil’s case.

After seeing Starr’s story. I’m going to talk about the different versions on Starr Carter. Before Khalil died. Starr never liked to speak up. She didn’t want white people to think she was ghetto and she also didn’t want her friends at garden heights to think she had changed. “As long as I play it cool and keep to myself, I should be fine. The ironic thing is though, at Williamson I don’t have to “play it cool” — I’m cool by default because I’m one of the only black kids there. I have to earn coolness in Garden Heights, and that’s more difficult than buying retro Jordans on release day. Funny how it works with white kids though. It’s dope to be black until it’s hard to be black.”(Pg. 252)

After Khalil’s death Starr started feeling sorry for herself and Khalil. She felt she could have done something to help Khalil. She still keeps to herself. “I knew that boy. Watched him grow up with you. He was more than any bad decision he made,” he says. “I hate that I let myself fall into that mindset of trying to rationalize his death. And at the end of the day, you don’t kill someone for opening a car door. If you do, you shouldn’t be a cop.” (Pg.256)

Starr before the interview was in a state between wanting to keep to herself and wanting to speak about Khalil. She made a Tumblr account for Khalil so people could see the real Khalil. Not the Khalil the news portrayed as a monster. “That’s the problem. We let people say stuff, and they say it so much that it becomes okay to them and normal for us. What’s the point of having a voice if you’re gonna be silent in those moments you shouldn’t be?” (Pg.11)

Starr was a different person after her interview. She would not back down from an argument or a disagreement. She was on fire when it came to protesting. She changed so much since the time before Khalil died. “‘Everybody wants to talk about how Khalil died,’ I say. ‘But this isn’t about how Khalil died. It’s about the fact that he lived. His life mattered. Khalil lived!’ I look at the cops again. ‘You hear me? Khalil lived!”. (pg. 412)

Starr Carter and the book The Hate U Give. (2021, Mar 22). Retrieved from https://papersowl.com/examples/starr-carter-and-the-book-the-hate-u-give/

The Hate U Give: Rhetorical Questions

Friend and Foe in the Hate U Give

“Give me Liberty or Give me Death” by Patrick Henry