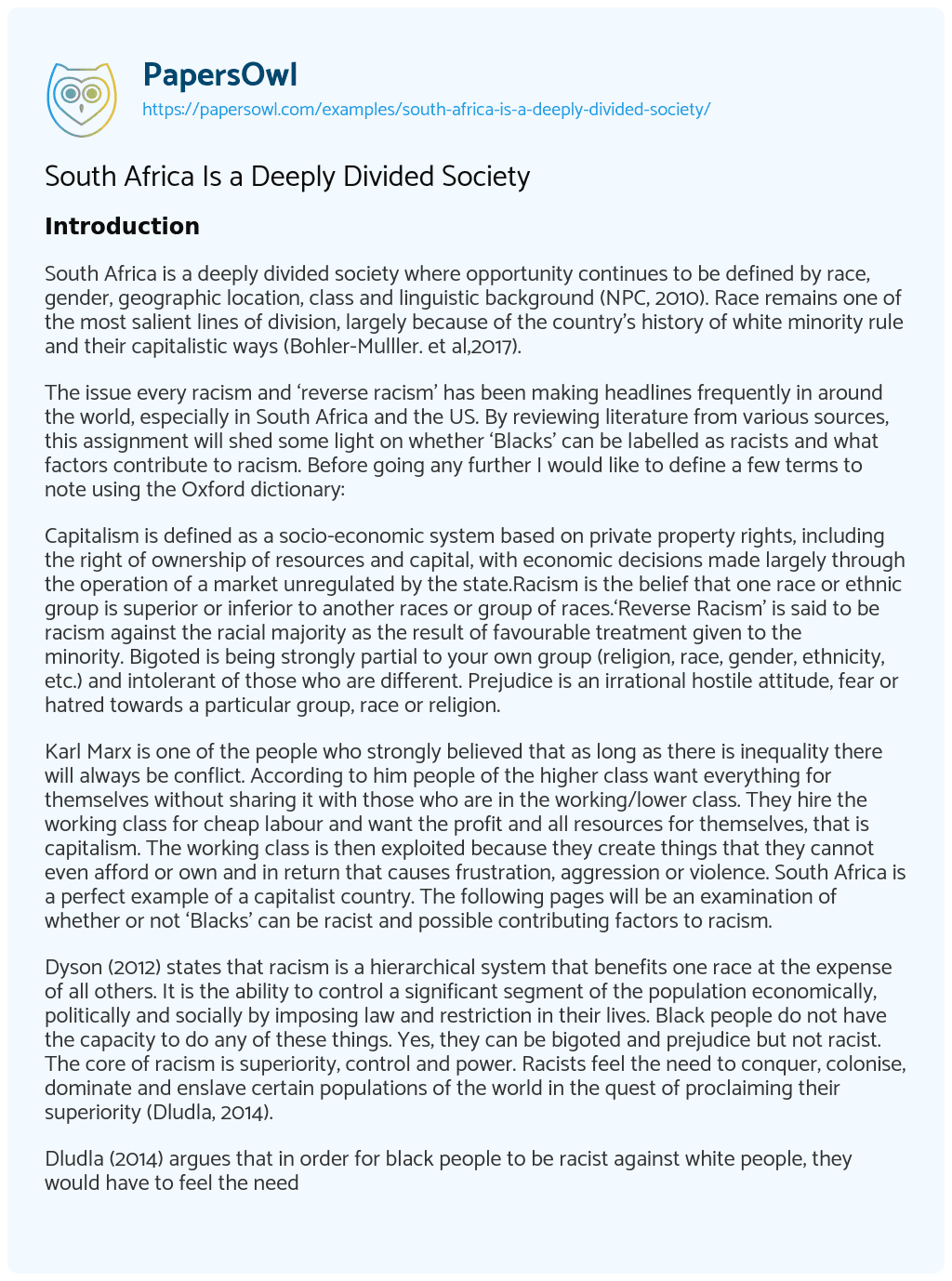 South Africa is a deeply divided society where opportunity continues to be defined by race, gender, geographic location, class and linguistic background (NPC, 2010). Race remains one of the most salient lines of division, largely because of the country’s history of white minority rule and their capitalistic ways (Bohler-Mulller. et al,2017).

The issue every racism and ‘reverse racism’ has been making headlines frequently in around the world, especially in South Africa and the US. By reviewing literature from various sources, this assignment will shed some light on whether ‘Blacks’ can be labelled as racists and what factors contribute to racism. Before going any further I would like to define a few terms to note using the Oxford dictionary:

Capitalism is defined as a socio-economic system based on private property rights, including the right of ownership of resources and capital, with economic decisions made largely through the operation of a market unregulated by the state.Racism is the belief that one race or ethnic group is superior or inferior to another races or group of races.‘Reverse Racism’ is said to be racism against the racial majority as the result of favourable treatment given to the minority. Bigoted is being strongly partial to your own group (religion, race, gender, ethnicity, etc.) and intolerant of those who are different. Prejudice is an irrational hostile attitude, fear or hatred towards a particular group, race or religion.

Karl Marx is one of the people who strongly believed that as long as there is inequality there will always be conflict. According to him people of the higher class want everything for themselves without sharing it with those who are in the working/lower class. They hire the working class for cheap labour and want the profit and all resources for themselves, that is capitalism. The working class is then exploited because they create things that they cannot even afford or own and in return that causes frustration, aggression or violence. South Africa is a perfect example of a capitalist country. The following pages will be an examination of whether or not ‘Blacks’ can be racist and possible contributing factors to racism.

Dyson (2012) states that racism is a hierarchical system that benefits one race at the expense of all others. It is the ability to control a significant segment of the population economically, politically and socially by imposing law and restriction in their lives. Black people do not have the capacity to do any of these things. Yes, they can be bigoted and prejudice but not racist. The core of racism is superiority, control and power. Racists feel the need to conquer, colonise, dominate and enslave certain populations of the world in the quest of proclaiming their superiority (Dludla, 2014).

Dludla (2014) argues that in order for black people to be racist against white people, they would have to feel the need to conquer, colonise, dominate and enslave white people in the quest of proclaiming their superiority as black people. They would further have to create standards of what constitutes beauty on the basis of their own skin colour and appearance and force such standards of beauty on white people. They would have to create systems which enable only people of colour to benefit people economically, socially and on any other basis on an extremely large scale to the exclusion of white people, and subject white people to slavery for the next four hundred years.

Transformative policies like the BEE or GEAR put in place by government are geared to progressively eradicate all forms of discrimination against people of colour and level the playing field so as to ensure greater economic participation of black people. White people believe that these transformative policies meant for previously advantaged sections of our society amount to what they call ‘reverse racism’ (Dludla, 2014).

According to Du Preez (2018), the level of insults, humiliation and threats by some black people aimed at whites have also reached dangerous levels as our political theatre becomes more and more populist. Although this behaviour may be seen as justified, it does more damage than any good. Political parties like EEF are just trying to gain votes by misleading their fellow people. However, whites must not mistake the frustration of black people for ‘reverse racism’.

Du Preez (2018) further states that when a black person insults or threatens a white person because he/she is white, it isn’t because the perpetrator believes the ‘black race’ is better than the ‘white race’. Rather, it is a reaction to white racism, white domination and historical injustices – and sometimes a sense of insecurity or frustration can play a role. The other argument proposed for why black people can’t be racist, namely that they have no power.

The Huff Post (2015) urges white people to realise that celebration of blackness and advocating for ‘Black’ people’s issues is not a crime. For instance, when the ‘Black Lives Matter’ campaign first came to light others felt attacked. Some still feel that Black history month, BET, Black Girls Rock or shows like Blackish are causing division amongst people. People must realise that ‘Blacks’ airing out their grievances or celebrating blackness does not in any way affect white people’s lives (the rate at which white go to jail, experience police brutality, poverty or get employment). I, therefore, state that ‘Black’ people cannot be racist.

There is a number of contributing factors to racism. It could be psychological, sociological, political or cultural factors. A few of them will be explained and some will be listed. Abrams (2017) suggests the following: Fear – Intense hatred usually results from fear. Fear is a primal survival instinct used by humans to avoid danger or anything that seems different from them. When a race sees another us threatening, that race unconsciously fears to lose control, security or importance. In return they come up with exaggerated and negative beliefs to justify their actions as attempting to be safe and survive.

The need to belong – Other people’s hatred results from the need to belong and beloved. They long to identify and be close with a certain group. Therefore, the ‘us against them’ notion makes the feel close to and accepted by the group they identify with. Projection – Projection allows us to avoid our own issues by projecting them onto others. A lot of times the things we hate about other people, deep down, may be what we hate about ourselves. The idea here is, ‘we not at fault, they are’.

Education and public dialogue – Lack of education can sometimes cause us to be racist. Teaching children about diversity from a young age is crucial. Prejudice often stems from home, so parents, teachers and the community must be careful of the behaviour they portray in front of the young ones. Also communities must openly talk and address these issues.

Both Dludla (2014) and Du Preez (2018) agree that racism is primarily premised on a belief of the superiority of one’s race. how can black people, who have been degraded, subjected to humiliation, enslaved and abused for centuries, and stripped of all self-esteem, think of themselves as being superior? It is clear that black people, particularly black South Africans cannot be racist, and therefore reverse racism is a myth.

White South Africans need to accept that ‘Blacks’ are at a disadvantage because of greedy white settlers, and that calls for equity and skills development before we can even think of competing in the same playing fielding. I will admit though, that a lot of us have become used to being dependent on the government to survive and our continuous display of violence and aggression when faced with frustration, further perpetuates the preconceived ideas white people have about us. We must stop.

As the people of South African we have to realise that nothing can change if we continue putting a band aid on top of a deep and infected wound. It is the cause that must be dealt with not the symptoms. We must openly talk about racism; forget about this rainbow nation ideology we have. We also must admit that ‘Black’ people are just at the forefront, whilst whites (e.g. the Oppenheimers) control everything.

Those bothered by ‘reverse racism’, the best medicine is to fight white racism, overt and institutionalised, and help to build a more just and equal society (Du Preez, 2018). In order to properly protect people from racism there needs to be a new legislation criminalising racist acts and hate speech as proposed by government. Such legislation would allow for the enhancement of penalties for hate speech and for hate crimes, for example, murder and violent attacks motivated by bias against the victim’s actual or perceived ethnicity, nation, race, religion or sexual orientation (Bohler-Mulller. et al,2017).

More than anything, as people we must learn to tolerate, respect and accept one another. How and what we are taught as children about other races plays a big role on how we treat others as grownups. The same way we are taught to speak or count, is the same way we should be taught to behave towards something foreign to us. I am not saying we ought to agree and accept everything without any questions but we must always show respect.

South Africa Is a Deeply Divided Society. (2021, May 24). Retrieved from https://papersowl.com/examples/south-africa-is-a-deeply-divided-society/