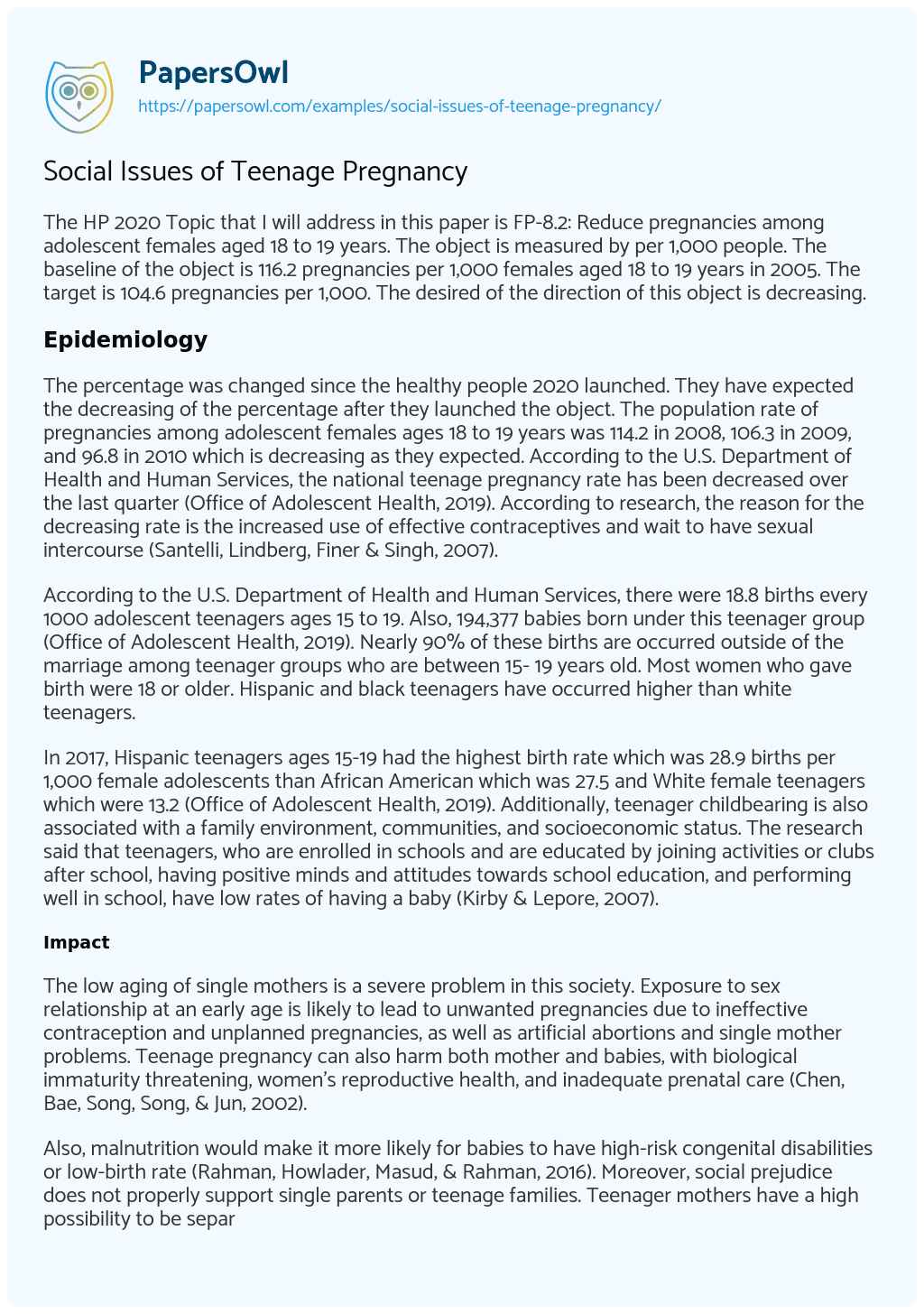 The percentage was changed since the healthy people 2020 launched. They have expected the decreasing of the percentage after they launched the object. The population rate of pregnancies among adolescent females ages 18 to 19 years was 114.2 in 2008, 106.3 in 2009, and 96.8 in 2010 which is decreasing as they expected. According to the U.S. Department of Health and Human Services, the national teenage pregnancy rate has been decreased over the last quarter (Office of Adolescent Health, 2019). According to research, the reason for the decreasing rate is the increased use of effective contraceptives and wait to have sexual intercourse (Santelli, Lindberg, Finer & Singh, 2007).

According to the U.S. Department of Health and Human Services, there were 18.8 births every 1000 adolescent teenagers ages 15 to 19. Also, 194,377 babies born under this teenager group (Office of Adolescent Health, 2019). Nearly 90% of these births are occurred outside of the marriage among teenager groups who are between 15- 19 years old. Most women who gave birth were 18 or older. Hispanic and black teenagers have occurred higher than white teenagers.

In 2017, Hispanic teenagers ages 15-19 had the highest birth rate which was 28.9 births per 1,000 female adolescents than African American which was 27.5 and White female teenagers which were 13.2 (Office of Adolescent Health, 2019). Additionally, teenager childbearing is also associated with a family environment, communities, and socioeconomic status. The research said that teenagers, who are enrolled in schools and are educated by joining activities or clubs after school, having positive minds and attitudes towards school education, and performing well in school, have low rates of having a baby (Kirby & Lepore, 2007).

The low aging of single mothers is a severe problem in this society. Exposure to sex relationship at an early age is likely to lead to unwanted pregnancies due to ineffective contraception and unplanned pregnancies, as well as artificial abortions and single mother problems. Teenage pregnancy can also harm both mother and babies, with biological immaturity threatening, women’s reproductive health, and inadequate prenatal care (Chen, Bae, Song, Song, & Jun, 2002).

Also, malnutrition would make it more likely for babies to have high-risk congenital disabilities or low-birth rate (Rahman, Howlader, Masud, & Rahman, 2016). Moreover, social prejudice does not properly support single parents or teenage families. Teenager mothers have a high possibility to be separated from the existing lifestyle, such as discontinuing schoolwork or leaving them in a state of extreme mental instability (Chen, Bae, Song, Song, & Jun, 2002).

Unplanned and unwanted pregnancies show fear, shock, embarrassment, and regret when teenager, both boy and girl, found out about the pregnancy. The unexpected pregnancy of a single mother can cause emotional and psychological shock and cause them to lose their ability to cope (Noh, 2002). On the other hand, teenagers who planned to conceive in advance were found to be receptive to pregnancy and adapt well to work or school to take good care of the baby to be born (Kristen, 2004). So, sex education or prenatal care should be strengthened so that teenager can communicate clearly and prepare for pregnancy.

Additionally, teenage pregnancy is more likely to conceive with chronic diseases such as high blood pressure and diabetes, and increases the incidence of congenital malformations, including health problems and chromosome aberrations during pregnancy, such as pregnancy high blood pressure, gestational diabetes, placenta disease, premature prenatal and early bilateral parameters (Kim, Kim, Kim & Kim, 2011). It can also increase postpartum health problems such as cesarean sectional delivery and postpartum bleeding, which can eventually have a severe effect on the mother’s health. There is a high possibility of various health problems, but pregnant teenagers are lack of knowledge and skills (Kim, Kim, Kim & Kim, 2011). So, the prenatal care and sex education are critical and essential to teenager mother.

Prenatal care is directly related to the health of pregnant women and fetuses, and postpartum care which is essential for the health of pregnant women and newborn babies because it reduces maternal mortality and affects the relationship between mother and newborn babies (Pozo-Cano, Castillo, Francisco, Florida, & Garcia-Garcia, 2015). Many mothers don’t know how to breastfeed their baby’s in an appropriate way.

They lack knowledge providing appropriate nutrition to their babies. Additionally, many mothers do not know how to take care of their health after giving birth or during the pregnant period. Our children are the one who will lead the World and next generation, and also enhance and develop our countries. If children are not raised under well-being mother or uneducated mother, they would have a high possibility to get a risk of developmental delay, social development, depression, genetic condition, unhealthy weight, or sexually transmitted diseases.

The intervention I chose is called Effects of a Prenatal Care Intervention for Adolescent Mothers on Birth Weight, Repeat Pregnancy, and Educational Outcomes at One Year Postpartum (Ford et al., 2002). This research evaluated a peer-centered prenatal program for adolescents’ participants. There were two different groups: experimental and control group. The participants were selected randomly and assigned into two separate groups to find out long-term and short-term outcomes of the peer-centered prenatal program (Ford et al., 2002).

The sample group was 282 urban pregnant adolescents including 94% of African American, 4% of Caucasian, and 2% of people from other races (Ford et al., 2002). There were five different clinics located in Detroit and Michigan. The participants received peer-centered care in a small group setting. The participants who were in the experimental group learned how to perform critical measurements in a small group setting with peers and also received care. The control group received individual care in the clinic (Ford et al., 2002).

There are a lot of reasons why women who live in the inner city have more barriers related to child care, transportation, lack of support or other temptation such as drugs, alcohols, or smoking. Also, the additional obstacles of service provision are the quality of services, underfunded services, health system barriers, and other characteristics such as long waiting time, short visits, or distances (Heaman et al., 2015).

The reasons that they conducted this study are adolescent mothers have a higher percentage than other age groups that experiencing more difficulties while they were giving birth to babies. About ? of teenage mothers did not receive appropriate prenatal care which leads babies with low birth weight and health problems during childhood development (Ford et al., 2002). Also, women, who are under 20 years old and grow up in low-income families, receive inadequate prenatal care services who are less educated than high school (Ford et al., 2002).

Also, most women were under 20 years old and unmarried, African American, Hispanic or first-generation children (Bandura, 1986). Also, teenage pregnancy has become social issues because teenage mothers did not reach legal age and adulthood. According to the study, the percentage of a pregnant teenager from high-income families is the lowest among unmarried teenagers (Cook & Cameron, 2017). Additionally, teenage mothers are triple times suffer from postpartum depression after giving birth, and infant mortality is 60% higher than other age groups. There is a higher percentage that infants are born with low birth weights and premature (Cook & Cameron, 2017).

The experimental group had a higher rate of unplanned pregnancy than the experimental group. The teenage mothers who received prenatal care had completed 0.5% more years of education compared to the women in the control group. The intervention of results showed that the program helped reducing health disparities among the participants in the United States (Ford et al., 2002).

I was wondered that the prenatal care that they invented also works for other ethnicities or other people who have different backgrounds. For example, many teenagers from low-income families might not have access to transportation or ride to get prenatal services. According to Healthy People 2020, access to prenatal care is critical because people can prevent diseases or death, detect and treatment of illness and so on (Access to Health Services, n.d.,) The teenager who lives in rural probably have more barriers to healthcare to access services. They probably would have financial limits to pay for services such as insurances or doctor’s visit. Also, many teenagers who did not get prenatal care would have a hard time to communicate with service providers due to poor health literacy.

This intervention should be served in different languages and should be target adolescence pregnant women who have lived in different areas. I believe when a teenager first learned that they are pregnant, they will probably feel weakness, hellish, wish to be miscarried or negative feelings towards their babies and themselves. Also, they possibly would deny the pregnancy in the hope of not being pregnant, as well as being bewildered and unreliable the first time they confirmed the pregnancy as they had never predicted it because they had sex without preparation for the pregnancy.

They definitely need emotional comfort and support from the adults. The service definitely should provide more emotional support or counseling so that they feel that they are not alone and insane. The reason is that when teenager found out the pregnancy, they would agonize over how to solve the baby problem, and they probably wonder whom to talk.

In order to reduce teenage prenatal pregnancy, the intervention should more be focused on teaching teenagers about sex (Mott, 1986). If we have more qualitative studies of the experiences of single mothers who gave birth more than one time, we definitely can gather more data what kind of prenatal care we should provide to teenagers and prevent the pregnancy. It is necessary to prevent unwanted pregnancies through practically applicable sex education in the face of positive gender awareness and sexual intercourse for teenagers. The schools or communities need to implement prenatal services and sex education for teenage single mother in order to reduce the number of teenage pregnancies.