Smoking in Public and its Affect 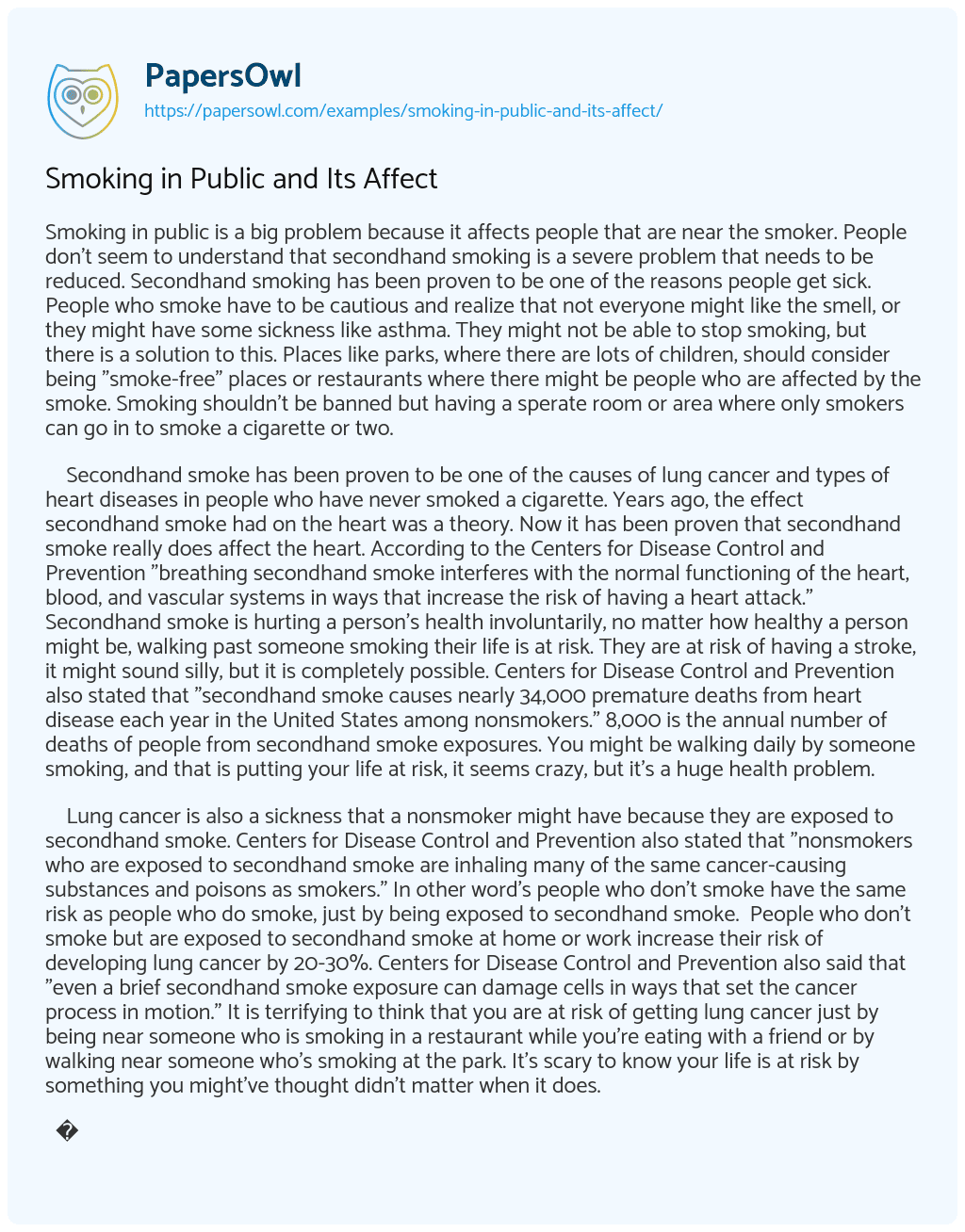 Smoking in public is a big problem because it affects people that are near the smoker. People don’t seem to understand that secondhand smoking is a severe problem that needs to be reduced. Secondhand smoking has been proven to be one of the reasons people get sick. People who smoke have to be cautious and realize that not everyone might like the smell, or they might have some sickness like asthma. They might not be able to stop smoking, but there is a solution to this. Places like parks, where there are lots of children, should consider being “smoke-free” places or restaurants where there might be people who are affected by the smoke. Smoking shouldn’t be banned but having a sperate room or area where only smokers can go in to smoke a cigarette or two.

Secondhand smoke has been proven to be one of the causes of lung cancer and types of heart diseases in people who have never smoked a cigarette. Years ago, the effect secondhand smoke had on the heart was a theory. Now it has been proven that secondhand smoke really does affect the heart. According to the Centers for Disease Control and Prevention “breathing secondhand smoke interferes with the normal functioning of the heart, blood, and vascular systems in ways that increase the risk of having a heart attack.” Secondhand smoke is hurting a person’s health involuntarily, no matter how healthy a person might be, walking past someone smoking their life is at risk. They are at risk of having a stroke, it might sound silly, but it is completely possible. Centers for Disease Control and Prevention also stated that “secondhand smoke causes nearly 34,000 premature deaths from heart disease each year in the United States among nonsmokers.” 8,000 is the annual number of deaths of people from secondhand smoke exposures. You might be walking daily by someone smoking, and that is putting your life at risk, it seems crazy, but it’s a huge health problem.

Another thing secondhand smoke can cause is Sudden Infant Death Syndrome (SIDS). SIDS is sudden, unexplained, unexpected death of an infant in the first year of life. According to the Centers for Disease and Prevention “infants who are exposed to secondhand smoke after birth are also at greater risk for SIDS.” That happens because chemicals in secondhand smoke affect the infants’ brain in a way that it interferes with the regulation of their breathing. Infants who die from SIDS “have higher concentrations of nicotine in their lungs and higher levels of cotinine than infants who die from other causes.” Cotinine is the biological marker for secondhand smoke.

Secondhand smoke is dangerous to everyone, but it is especially hazardous to pregnant women. According to the American Pregnancy Association, “many women are exposed to secondhand smoke from friends and family members. These types of indirect contact with cigarettes can also have detrimental effects on the health of you and your baby.” While pregnant it is best to avoid secondhand and thirdhand smoke at all cost. Thirdhand smoke is smoke that is in places like couches and carpets. Some health conditions that are associated with secondhand smoke are a miscarriage, low birth weight, early birth, learning or behavioral deficiencies in your child and, SIDS. To reduce the risk of anything like that happening to you or your child, avoiding smoke is best.

Smoking doesn’t have to be illegal, but it should be limited. Banning it in places like restaurants, parks, and stores is a terrific way to start minimizing the risk secondhand smoke causes. It has been proven that having public smoking bans have helped reduce health risks like heart attacks or other cardiovascular diseases. According to Dr. Meyers in Science Daily, “public smoking bans had a stronger effect in reducing heart attacks among women and younger individuals, which may be explained, in part, because younger people tend to frequent clubs, restaurants, and bars where smoking is a likely part of the social scene.” Science Daily also reported that “beneficial effects of smoking bans appear to be fairly immediate, with declines in reported heart attack cases within three months.” In other words, smoke bans in public places have reduced heart attack cases.  AHA Journals reported that “researchers found that never-smokers who had a stroke were early 50% more likely to be exposed to secondhand smoke.”  Having smoke bans in public places might reduce that percentage, 50% is a lot for a person who has never smoked a cigarette. Dr. Michelle Lin of the Johns Hopkins School of Medicine in Baltimore said that “secondhand smoke is a risk to all people, but those with a history of stroke should take extra care to avoid it.” If a person who had a stroke once wants to live a longer life, they have to avoid secondhand hand smoke. Now a day it is hard to prevent it, people smoke everywhere, smoke is everywhere.

Smoking doesn’t have to be banned everywhere. There has to be a solution to this issue. Giving up smoking is hard for some people. They sometimes have to smoke more than three cigarettes a day. A solution for this is to put rooms in restaurants, malls, maybe even parks, where only smokers can go in. That way they aren’t putting anyone’s life at risk with horrible diseases. They can go in smoke a cigarette or two and go on with their day.

Smoking doesn’t only affect the smoker. It affects anyone passing by the smoker. The person smoking doesn’t realize that, but as a nonsmoker people should be informed so they can take the precautions needed. Especially if they are pregnant, or have a child with them. Secondhand smoke is extremely dangerous that has many, many risk and sicknesses. Examples of those sicknesses are Cardiovascular diseases, heart attacks, lung cancer, and SIDS.

Smoking in Public and Its Affect. (2020, Mar 29). Retrieved from https://papersowl.com/examples/smoking-in-public-and-its-affect/

Smoking should be Banned in Public Places

A Closer Look at the Effects of Smoking

A Problem of Teen Smoking

An Issue of Smoking Cessation

My Attitude to Smoking