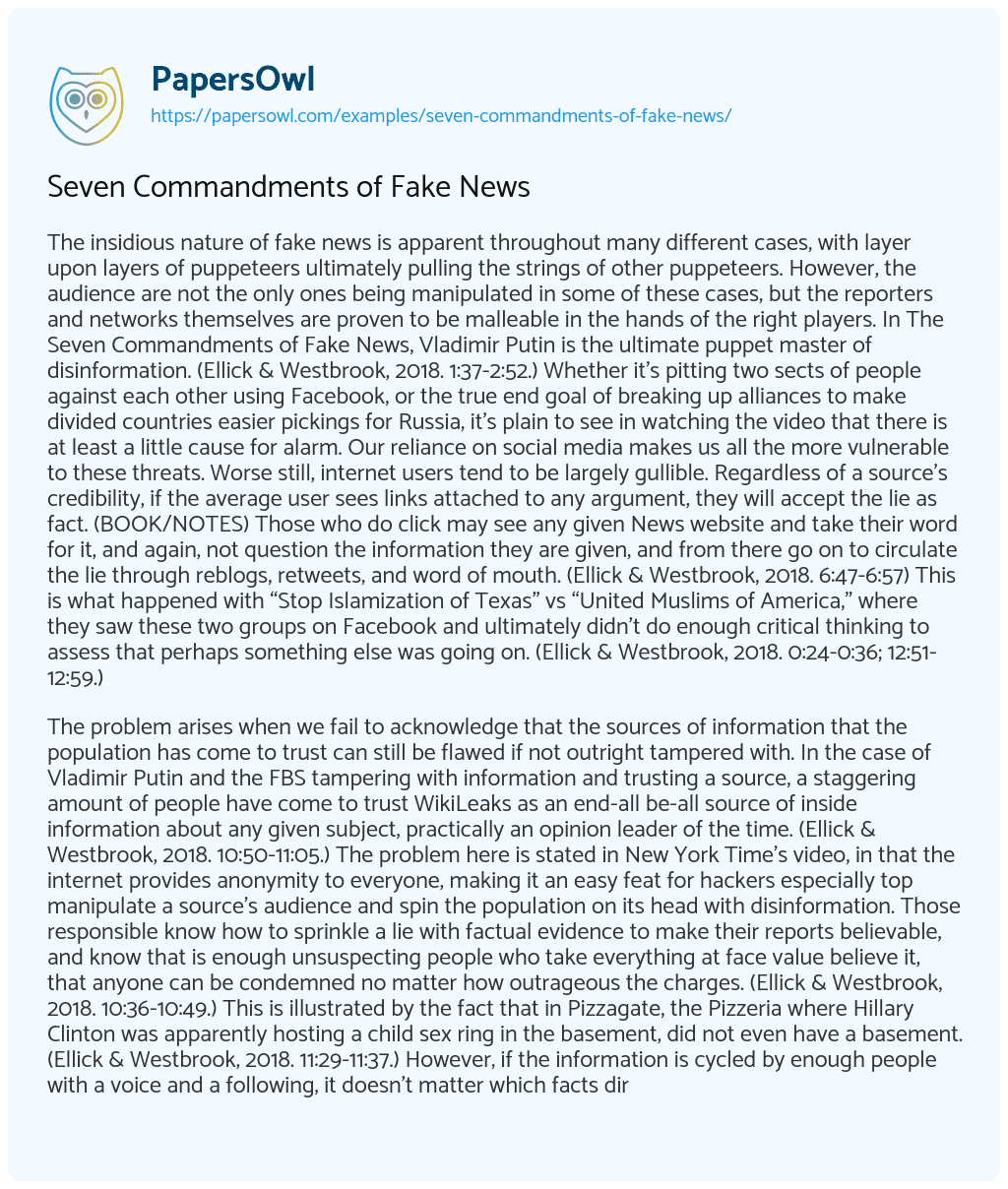 The insidious nature of fake news is apparent throughout many different cases, with layer upon layers of puppeteers ultimately pulling the strings of other puppeteers. However, the audience are not the only ones being manipulated in some of these cases, but the reporters and networks themselves are proven to be malleable in the hands of the right players. In The Seven Commandments of Fake News, Vladimir Putin is the ultimate puppet master of disinformation. (Ellick & Westbrook, 2018. 1:37-2:52.) Whether it’s pitting two sects of people against each other using Facebook, or the true end goal of breaking up alliances to make divided countries easier pickings for Russia, it’s plain to see in watching the video that there is at least a little cause for alarm. Our reliance on social media makes us all the more vulnerable to these threats. Worse still, internet users tend to be largely gullible. Regardless of a source’s credibility, if the average user sees links attached to any argument, they will accept the lie as fact. (BOOK/NOTES) Those who do click may see any given News website and take their word for it, and again, not question the information they are given, and from there go on to circulate the lie through reblogs, retweets, and word of mouth. (Ellick & Westbrook, 2018. 6:47-6:57) This is what happened with “Stop Islamization of Texas” vs “United Muslims of America,” where they saw these two groups on Facebook and ultimately didn’t do enough critical thinking to assess that perhaps something else was going on. (Ellick & Westbrook, 2018. 0:24-0:36; 12:51-12:59.)

The problem arises when we fail to acknowledge that the sources of information that the population has come to trust can still be flawed if not outright tampered with. In the case of Vladimir Putin and the FBS tampering with information and trusting a source, a staggering amount of people have come to trust WikiLeaks as an end-all be-all source of inside information about any given subject, practically an opinion leader of the time. (Ellick & Westbrook, 2018. 10:50-11:05.) The problem here is stated in New York Time’s video, in that the internet provides anonymity to everyone, making it an easy feat for hackers especially top manipulate a source’s audience and spin the population on its head with disinformation. Those responsible know how to sprinkle a lie with factual evidence to make their reports believable, and know that is enough unsuspecting people who take everything at face value believe it, that anyone can be condemned no matter how outrageous the charges. (Ellick & Westbrook, 2018. 10:36-10:49.) This is illustrated by the fact that in Pizzagate, the Pizzeria where Hillary Clinton was apparently hosting a child sex ring in the basement, did not even have a basement. (Ellick & Westbrook, 2018. 11:29-11:37.) However, if the information is cycled by enough people with a voice and a following, it doesn’t matter which facts directly clash with the fallacy, because by that point the blind believers will drown out the rational perspective, at least long enough to keep the public distracted while Putin and his associates achieve what they set out to accomplish by creating the smokescreen.

The Seven Commandments of Fake News portrayed this by indicating that the two opposing ideologies of those for and against Islam as a crack in society to be exploited. The New York Times delves into the situation, using this event as an example of what the FBS targets, that being by spotting a conflict in America and adding fuel to the fire to worsen conditions and promote greater animosity. (Ellick & Westbrook, 2018. 9:35-9:46.) This animosity is a smaller skirmish when compared to what this sort of manipulation is capable when utilized to the fullest extension of internet anonymity, as NY Times indicates that Vladimir Putin’s aim is to weather away at international ties so that individual countries are easier to overwhelm and infiltrate. (Ellick & Westbrook, 2018. 2:27-2:37.) The video later goes onto stress this by adding that the FBS knows that little by little “a consistent drop of water will one day weather a rock,” which in regards to this would mean that no matter how small the division within the United States, eventually they know this small acts will have a big payoff. The Russians are prepared to “play a long game” with discourse in America, knowing full well the overall outcome will lean in their favor. (Ellick & Westbrook, 2018. 7:35-8:13.) Meanwhile, while one of the steps of the commandments is to put out as obnoxious of a story as possible, the general population will be so distracted with the brazen nature of a headline (or the obnoxious, brazen presidential candidate they’re backing) that the FBS scheming isn’t spotted until well after the damage is already done. In this way they can ruin the reputation of their own opposition, in this case Hillary Clinton, and secure their victory. (Ellick & Westbrook, 2018. 6:07-6:21; 10:28-10:35.) Even when the threat of being exposed is there, all involved persons deny everything. The way the audience perceives the person who has been slandered, even after clearing their name, the seed of doubt remains. Once accused in the first place, it’s an undertaking to try and win back the good graces of the audience, especially when the philosophy most operate under is “guilty until proven innocent.” (BOOK/NOTES) In regards to the FBS, there are usually facts strewn throughout the story to add foundation to the scandal, and in doing so even after the allegations have been laid to rest the story tends to resound with those the story reached.

With that being said, the video somewhat equalizes the United States and Russia in a way that is not often represented. Russia is presently always under scrutiny for manipulating the 2016 presidential election, however what is talked about far less and is perhaps less known is that America does interfere in the affairs of other countries, albeit in such a way that cannot compare to the sheer sophistication and magnitude of the Russian government’s schemes. (Ellick & Westbrook, 2018. 3:38-4:01.) While natural for a country to want to make itself look good, be it in rectifying their historical failures through movies, or just having a president who boasts its qualities, it’s easy for the flaws to get overshadowed and covered up. In doing so, America looked like an innocent victim of Russia, when in reality America has played a similar game with a less impressive score.

The audience’s attitude toward the news tends to be that while knowing the stories are intentional hyped up and sensationalized, there is enough truth to be taken from what they say and it’s clear enough to the viewers what is true and what is fodder. (BOOK/NOTES) However, in New York Times’ video, it seems to imply that perhaps the audience doesn’t take into account that the reporters and networks themselves are being mislead by an even higher power with a greater influence. Expecting a bigger piece of the truth from the news, the general audience member may not choose to delve deeper and do research of their own. Once a person chooses their default news source, they typically won’t branch out to others, because another source may not align with their personal politics, and is typically more closed-minded. Due to this, certain takes on the story will only reach certain people. (BOOK/NOTES) Someone who hates the New York Times and favors some other media outlet wouldn’t have gotten this take on Putin’s manipulation, and might’ve favored a take that denied any involvement of him in the 2016 with generally more pro-Trump undertones. In the video it’s emphasized that when 80% of a network’s coverage is excellent journalism, it gives the journalists enough credit to deny and shrug off any doubts even when there is still 20% of facts left incorrect or otherwise questionable. (Ellick & Westbrook, 2018. 11:59-12:14.)

All in all, it serves to dissect any and all media by first picking apart those behind said media to decide the validity of the message being relayed. Even then, it is best to take everything with a grain of salt, especially online where it becomes even more difficult to discern a convincing lie from the truth due to anonymity and the ability to cover one’s tracks online. Everyone has their own agenda, and those biases will color their messages to illustrate how the provider views the world which could detract from the overall big picture. Question everything, take nothing at face value, and weigh your findings to reach your own conclusions, no matter how the louder presences in our media try to razzle dazzle you.

What do we Know about Fake News

News Media: how and why to Spot “Fake” News

An Issue of Fake News in World