School Safety and Violence in the US 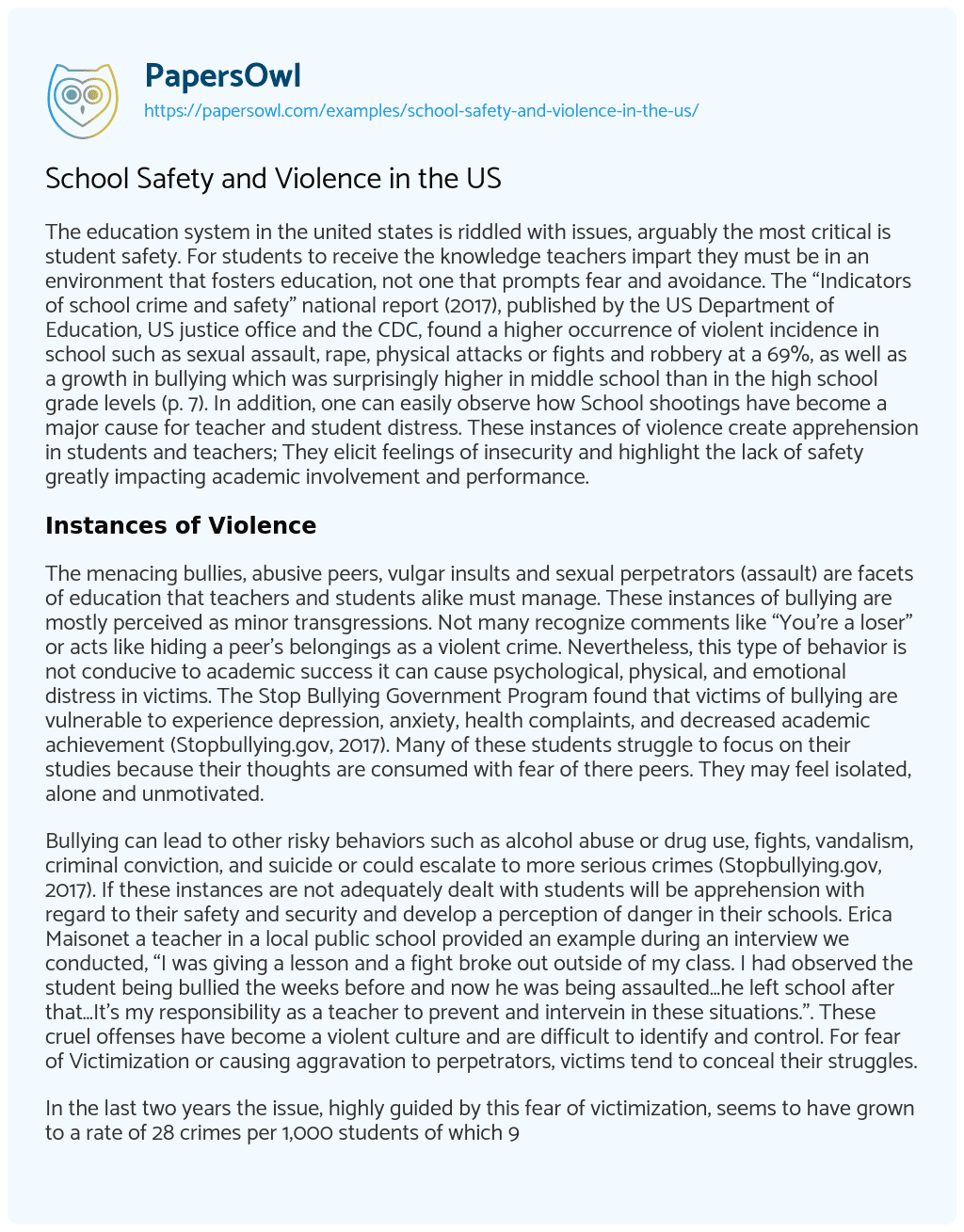 The education system in the united states is riddled with issues, arguably the most critical is student safety. For students to receive the knowledge teachers impart they must be in an environment that fosters education, not one that prompts fear and avoidance. The “Indicators of school crime and safety” national report (2017), published by the US Department of Education, US justice office and the CDC, found a higher occurrence of violent incidence in school such as sexual assault, rape, physical attacks or fights and robbery at a 69%, as well as a growth in bullying which was surprisingly higher in middle school than in the high school grade levels (p. 7). In addition, one can easily observe how School shootings have become a major cause for teacher and student distress. These instances of violence create apprehension in students and teachers; They elicit feelings of insecurity and highlight the lack of safety greatly impacting academic involvement and performance.

The menacing bullies, abusive peers, vulgar insults and sexual perpetrators (assault) are facets of education that teachers and students alike must manage. These instances of bullying are mostly perceived as minor transgressions. Not many recognize comments like “You’re a loser” or acts like hiding a peer’s belongings as a violent crime. Nevertheless, this type of behavior is not conducive to academic success it can cause psychological, physical, and emotional distress in victims. The Stop Bullying Government Program found that victims of bullying are vulnerable to experience depression, anxiety, health complaints, and decreased academic achievement (Stopbullying.gov, 2017). Many of these students struggle to focus on their studies because their thoughts are consumed with fear of there peers. They may feel isolated, alone and unmotivated.

Bullying can lead to other risky behaviors such as alcohol abuse or drug use, fights, vandalism, criminal conviction, and suicide or could escalate to more serious crimes (Stopbullying.gov, 2017). If these instances are not adequately dealt with students will be apprehension with regard to their safety and security and develop a perception of danger in their schools. Erica Maisonet a teacher in a local public school provided an example during an interview we conducted, “I was giving a lesson and a fight broke out outside of my class. I had observed the student being bullied the weeks before and now he was being assaulted…he left school after that…It’s my responsibility as a teacher to prevent and intervein in these situations.”. These cruel offenses have become a violent culture and are difficult to identify and control. For fear of Victimization or causing aggravation to perpetrators, victims tend to conceal their struggles.

In the last two years the issue, highly guided by this fear of victimization, seems to have grown to a rate of 28 crimes per 1,000 students of which 9 may be reported to police authorities (“Indicators of school crime and safety” national report, 2017, p.7). Students reluctancy to share complicates a teacher’s role as protector. Their inability to identify these situations can induce feelings of inadequacy or frustration thus interfering in the teaching process and preventing students and teachers from accomplishing their goals. There are certain risk factors that help identify victims and perpetrators. School crimes can be gang-related or influenced by drug-related issues. Most perpetrators have a unique family dynamic, history of criminal activity and low Socio-economic statues all of which affect their violent tendencies (Violence prevention, October 30, 2018).

The feeling of impotence and hopelessness in a victim come from not knowing how to resolve this type of conflict and results in them taking matters into their own hands. Their sense of shame and feelings of anger drives them to find something stronger and more powerful than the bully. Many of these individuals seeking revenge are influenced by events like the Santa Fe school shooting. In which 8 students and 2 teachers were killed and 10 others wounded. CNN reports that there have been over 23 school shootings this year alone averaging to about one shooting a week. In addition, The New York Times reports (February 14, 2018) that since the 2012 sandy hook shooting, more than 400 people have been shot in over 200 schools (Jugal K. Paltel, 2018). Not all these individuals were guided by a need for revenge some of these events were unprovoked or executed by people previously seen as stable. This compromises a school’s ability to protect their students because they can’t identify all possible threats. Though threat assessment teams are formed to identify threats and prevent tragic events, they continue to prevail because of the limitations in knowledge. Ms. Maisonet shares an experience she had at her school:

“I don’t know if I’m supposed to say but last year there was this kid, he didn’t have many friends and he was always being picked on…One day in class he said really angrily ‘oh whatever yall are gonna see on Monday… ya’ll are gonna die…the teacher reported it to PD… they found a whole bunch of guns that he had been storing. Everyone had been talking about that, it was all over Twitter and Facebook. On Monday half of our school population was out. Nobody went because all throughout the weekend everybody was passing around that on Monday there was going to be a shootout. Parents called asking what was going on and if it was true. They had to do a mass announcement that there was a threat, but everything is fine they caught it on time and kids could return to school. When things like that happened it [makes you aware] of the insecurity and concerns for student well-being…You don’t really think about it until it happens. But a lot of the time when it happens it’s too late, Like at Fredrick Douglass or sandy hook.”

School Safety and Violence in the US. (2021, Mar 27). Retrieved from https://papersowl.com/examples/school-safety-and-violence-in-the-us/

The Path to Violence Understanding the Problem of School Shootings