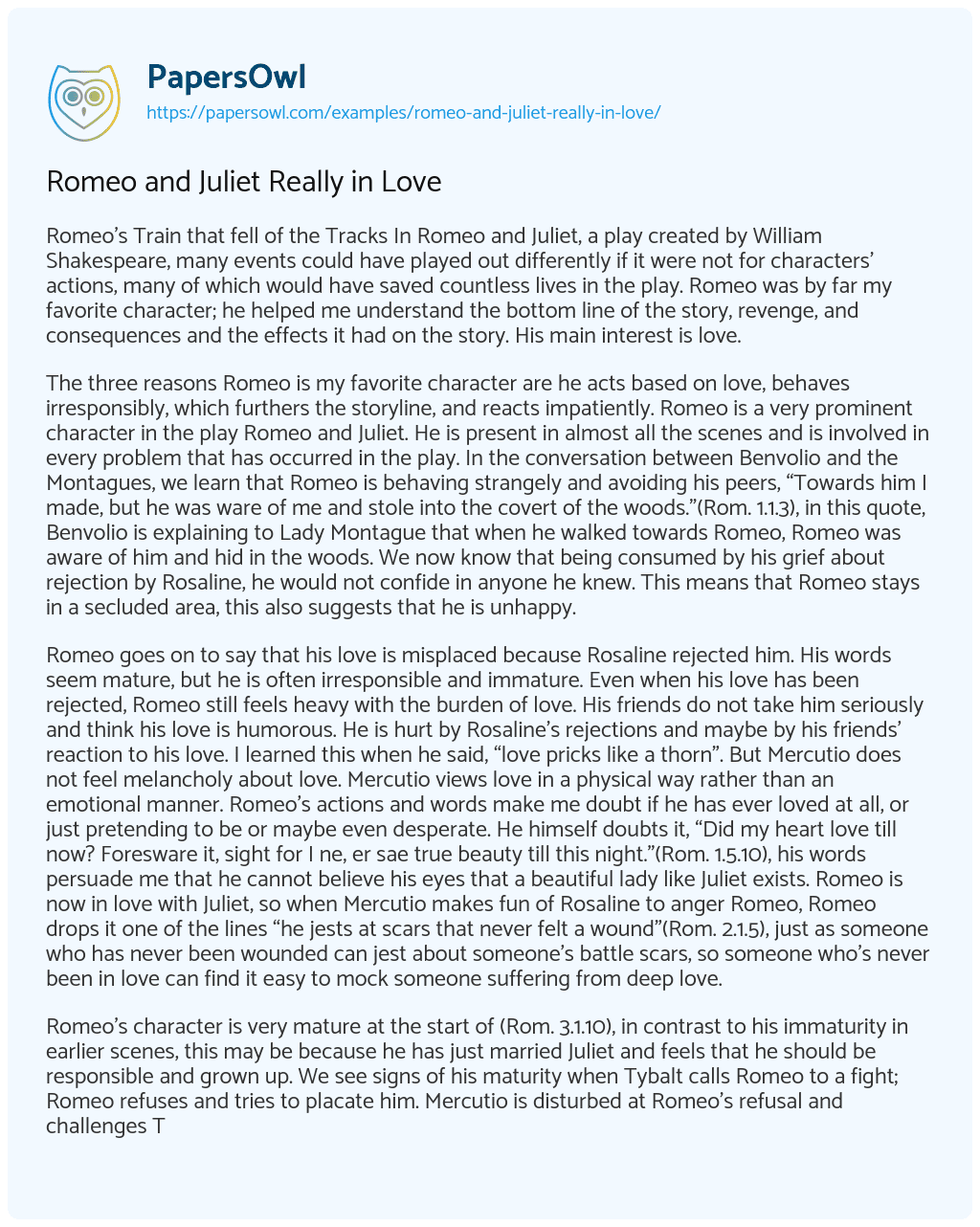 Romeo’s Train that fell of the Tracks In Romeo and Juliet, a play created by William Shakespeare, many events could have played out differently if it were not for characters’ actions, many of which would have saved countless lives in the play. Romeo was by far my favorite character; he helped me understand the bottom line of the story, revenge, and consequences and the effects it had on the story. His main interest is love.

The three reasons Romeo is my favorite character are he acts based on love, behaves irresponsibly, which furthers the storyline, and reacts impatiently. Romeo is a very prominent character in the play Romeo and Juliet. He is present in almost all the scenes and is involved in every problem that has occurred in the play. In the conversation between Benvolio and the Montagues, we learn that Romeo is behaving strangely and avoiding his peers, “Towards him I made, but he was ware of me and stole into the covert of the woods.”(Rom. 1.1.3), in this quote, Benvolio is explaining to Lady Montague that when he walked towards Romeo, Romeo was aware of him and hid in the woods. We now know that being consumed by his grief about rejection by Rosaline, he would not confide in anyone he knew. This means that Romeo stays in a secluded area, this also suggests that he is unhappy.

Romeo goes on to say that his love is misplaced because Rosaline rejected him. His words seem mature, but he is often irresponsible and immature. Even when his love has been rejected, Romeo still feels heavy with the burden of love. His friends do not take him seriously and think his love is humorous. He is hurt by Rosaline’s rejections and maybe by his friends’ reaction to his love. I learned this when he said, “love pricks like a thorn”. But Mercutio does not feel melancholy about love. Mercutio views love in a physical way rather than an emotional manner. Romeo’s actions and words make me doubt if he has ever loved at all, or just pretending to be or maybe even desperate. He himself doubts it, “Did my heart love till now? Foresware it, sight for I ne, er sae true beauty till this night.”(Rom. 1.5.10), his words persuade me that he cannot believe his eyes that a beautiful lady like Juliet exists. Romeo is now in love with Juliet, so when Mercutio makes fun of Rosaline to anger Romeo, Romeo drops it one of the lines “he jests at scars that never felt a wound”(Rom. 2.1.5), just as someone who has never been wounded can jest about someone’s battle scars, so someone who’s never been in love can find it easy to mock someone suffering from deep love.

Romeo’s character is very mature at the start of (Rom. 3.1.10), in contrast to his immaturity in earlier scenes, this may be because he has just married Juliet and feels that he should be responsible and grown up. We see signs of his maturity when Tybalt calls Romeo to a fight; Romeo refuses and tries to placate him. Mercutio is disturbed at Romeo’s refusal and challenges Tybalt himself. Romeo tries to make peace and they still end up fighting.

Romeo blames himself for Mercutio’s death and is depressed and filled with rage. Romeo acts without thinking and kills Tybalt. Romeo is, in fact young, immature, irresponsible, and impatient. Upon first sight, he promptly falls in love with Juliet, but it is real love he felt for her than anyone he has ever ‘loved’. In alacrity, he also arranges their marriage the very day they met; the marriage is planned for the next day. In the same manner, when he hears that Juliet is dead from Balthazar, he purchases poison and kills himself without second thoughts about what he has left to live for.

If he had only acted with a little more caution and consideration, his ending would have been prevented and he would get married to Juliet and it would be a happy ending. Because of his absurd love for Juliet and desire to be with her forever, Romeo has really proved at the end of the play that he has indeed fallen in love.

Romeo and Juliet Really in Love. (2021, Jun 17). Retrieved from https://papersowl.com/examples/romeo-and-juliet-really-in-love/

What are some Mistakes in Romeo and Juliet that Took the Tragedy Forward?