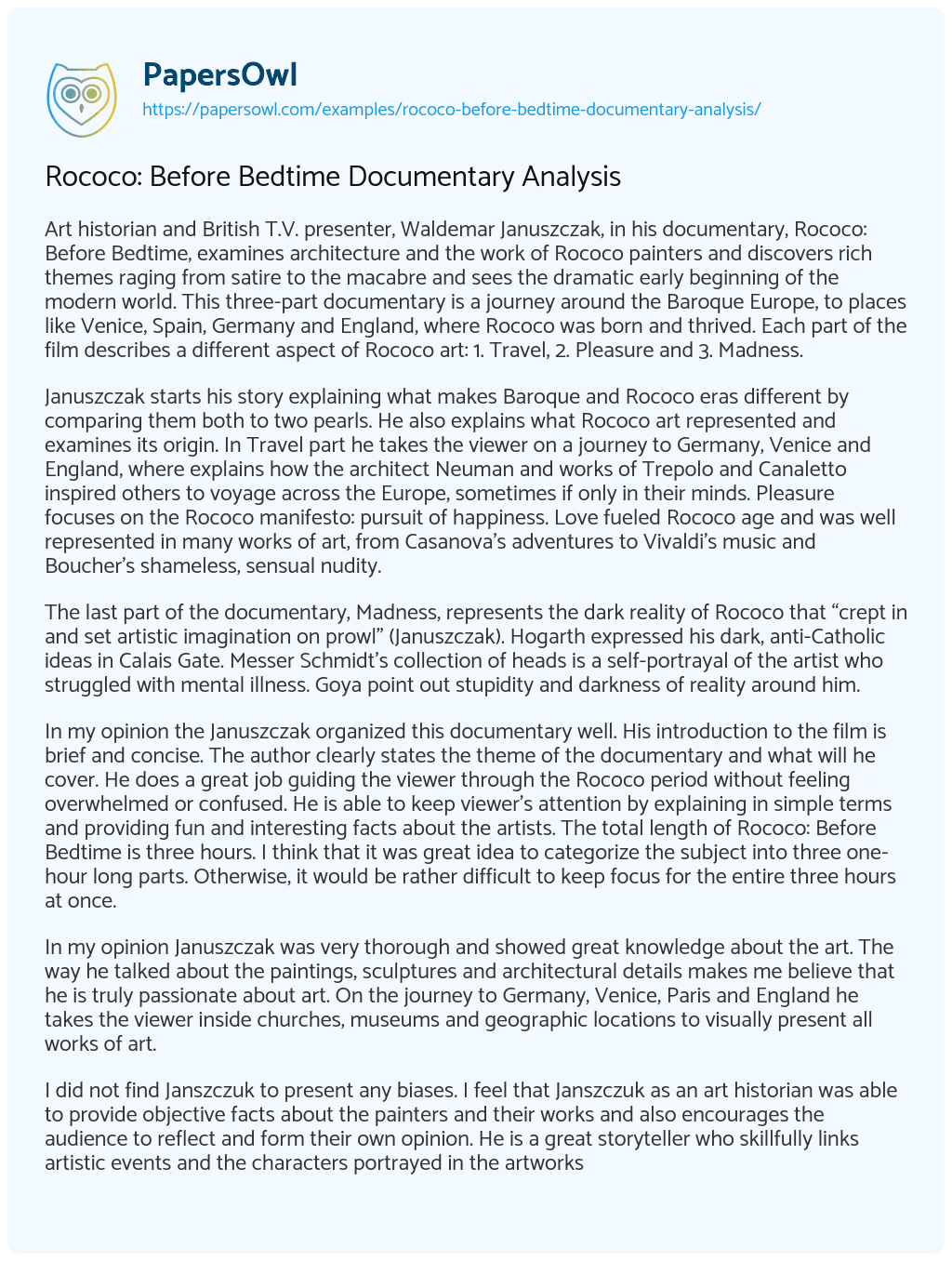 Art historian and British T.V. presenter, Waldemar Januszczak, in his documentary, Rococo: Before Bedtime, examines architecture and the work of Rococo painters and discovers rich themes raging from satire to the macabre and sees the dramatic early beginning of the modern world. This three-part documentary is a journey around the Baroque Europe, to places like Venice, Spain, Germany and England, where Rococo was born and thrived. Each part of the film describes a different aspect of Rococo art: 1. Travel, 2. Pleasure and 3. Madness.

Januszczak starts his story explaining what makes Baroque and Rococo eras different by comparing them both to two pearls. He also explains what Rococo art represented and examines its origin. In Travel part he takes the viewer on a journey to Germany, Venice and England, where explains how the architect Neuman and works of Trepolo and Canaletto inspired others to voyage across the Europe, sometimes if only in their minds. Pleasure focuses on the Rococo manifesto: pursuit of happiness. Love fueled Rococo age and was well represented in many works of art, from Casanova’s adventures to Vivaldi’s music and Boucher’s shameless, sensual nudity.

The last part of the documentary, Madness, represents the dark reality of Rococo that “crept in and set artistic imagination on prowl” (Januszczak). Hogarth expressed his dark, anti-Catholic ideas in Calais Gate. Messer Schmidt’s collection of heads is a self-portrayal of the artist who struggled with mental illness. Goya point out stupidity and darkness of reality around him.

In my opinion the Januszczak organized this documentary well. His introduction to the film is brief and concise. The author clearly states the theme of the documentary and what will he cover. He does a great job guiding the viewer through the Rococo period without feeling overwhelmed or confused. He is able to keep viewer’s attention by explaining in simple terms and providing fun and interesting facts about the artists. The total length of Rococo: Before Bedtime is three hours. I think that it was great idea to categorize the subject into three one-hour long parts. Otherwise, it would be rather difficult to keep focus for the entire three hours at once.

In my opinion Januszczak was very thorough and showed great knowledge about the art. The way he talked about the paintings, sculptures and architectural details makes me believe that he is truly passionate about art. On the journey to Germany, Venice, Paris and England he takes the viewer inside churches, museums and geographic locations to visually present all works of art.

I did not find Janszczuk to present any biases. I feel that Janszczuk as an art historian was able to provide objective facts about the painters and their works and also encourages the audience to reflect and form their own opinion. He is a great storyteller who skillfully links artistic events and the characters portrayed in the artworks to political events. I found particularly interesting the story of Marie Antoinette and picturesque village at Château de Versailles, the Hameau de la Reine. Antoinette, tired and stressed by the life at Versailles Palace, took a refugee at the estate where she dressed up as a milkmaid or shepherdess and pretended to be a peasant. Unfortunately, her nonchalant and thoughtless behavior caused a resentment towards monarchy among the French and led to the French Revolution. When he presents Boucher’s portrays of Madame de Pompadour, the chief mistress of King Louis XV. While Boucher paints Pompadour with “unreal, infamous look, so light, innocent and shy” (Janszczuk), in fact she was Louis’s closest confidant and advisor, who had a full control over the access to audiences with Louis XV and publicly spoke on his behalf.

Personally, I really enjoyed watching Rococo: Before Bedtime. I would highly recommend this documentary to my fellow students, but also to anyone who is interested in background stories about the most famous works of arts. I found stories of the painters and the background facts informative and captivating. Janszczuk used simple terms and allegories that helped me better understand the art terms. For example, he describes Baroque and Rococo art styles by comparing them to a pearl. I think that this documentary is an excellent supplemental knowledge in addition to the textbook information. Rococo, usually described as a style known for splendor, exaggeration and focus on beauty, also had a dark side, represented by artists who battled their own demons. The realistic and unflattering works of Goya and Messerschmidt made me realize that Rococo art was full of great creative predictions and even though the Rococo era is over, it never truly went away- that’s just us in early days.

A Documentary Analysis of Cathedral

Analysis of “The True Cost” Documentary